In celestial mechanics true longitude is the ecliptic longitude at which an orbiting body could actually be found if its inclination were zero. Together with the inclination and the ascending node, the true longitude can tell us the precise direction from the central object at which the body would be located at a particular time.

The ecliptic is the mean plane of the apparent path in the Earth's sky that the Sun follows over the course of one year; it is the basis of the ecliptic coordinate system. This plane of reference is coplanar with Earth's orbit around the Sun. The ecliptic is not normally noticeable from Earth's surface because the planet's rotation carries the observer through the daily cycles of sunrise and sunset, which obscure the Sun's apparent motion against the background of stars during the year.

Orbital elements are the parameters required to uniquely identify a specific orbit. In celestial mechanics these elements are generally considered in classical two-body systems, where a Kepler orbit is used. There are many different ways to mathematically describe the same orbit, but certain schemes, each consisting of a set of six parameters, are commonly used in astronomy and orbital mechanics.

In celestial mechanics, the mean anomaly is the fraction of an elliptical orbit's period that has elapsed since the orbiting body passed periapsis, expressed as an angle which can be used in calculating the position of that body in the classical two-body problem. It is the angular distance from the pericenter which a fictitious body would have if it moved in a circular orbit, with constant speed, in the same orbital period as the actual body in its elliptical orbit. 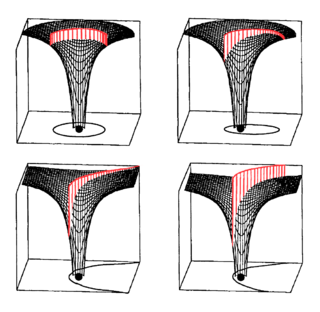 A circular orbit is the orbit with a fixed distance around the barycenter, that is, in the shape of a circle.

Spacecraft flight dynamics is the science of space vehicle performance, stability, and control. It requires analysis of the six degrees of freedom of the vehicle's flight, which are similar to those of aircraft: translation in three dimensional axes; and its orientation about the vehicle's center of mass in these axes, known as pitch, roll and yaw, with respect to a defined frame of reference.

Greek letters are used in mathematics, science, engineering, and other areas where mathematical notation is used as symbols for constants, special functions, and also conventionally for variables representing certain quantities. In these contexts, the capital letters and the small letters represent distinct and unrelated entities. Those Greek letters which have the same form as Latin letters are rarely used: capital A, B, E, Z, H, I, K, M, N, O, P, T, Y, X. Small ι, ο and υ are also rarely used, since they closely resemble the Latin letters i, o and u. Sometimes font variants of Greek letters are used as distinct symbols in mathematics, in particular for ε/ϵ and π/ϖ. The archaic letter digamma (Ϝ/ϝ/ϛ) is sometimes used.

The orbital plane of a revolving body is the geometric plane on which its orbit lies. A common example would be the centers of a massive body, of an orbiting body, and of the orbiting object at another time.

In celestial mechanics, the Kozai mechanism or Lidov–Kozai mechanism or Kozai–Lidov mechanism, also known as the Kozai, Lidov–Kozai or Kozai–Lidoveffect, oscillations, cycles or resonance, is a dynamical phenomenon affecting the orbit of a binary system perturbed by a distant third body under certain conditions, causing the orbit's argument of pericenter to oscillate about a constant value, which in turn leads to a periodic exchange between its eccentricity and inclination. The process occurs on timescales much longer than the orbital periods. It can drive an initially near-circular orbit to arbitrarily high eccentricity, and flip an initially moderately inclined orbit between a prograde and a retrograde motion.

In celestial mechanics, the argument of latitude is an angular parameter that defines the position of a body moving along a Kepler orbit. It is the angle between the ascending node and the body.