In astrodynamics an orbit equation defines the path of orbiting body

, without specifying position as a function of time. Under standard assumptions, a body moving under the influence of a force, directed to a central body, with a magnitude inversely proportional to the square of the distance (such as gravity), has an orbit that is a conic section (i.e. circular orbit, elliptic orbit, parabolic trajectory, hyperbolic trajectory, or radial trajectory) with the central body located at one of the two foci, or the focus (Kepler's first law).

If the conic section intersects the central body, then the actual trajectory can only be the part above the surface, but for that part the orbit equation and many related formulas still apply, as long as it is a freefall (situation of weightlessness).

Consider a two-body system consisting of a central body of mass M and a much smaller, orbiting body of mass

, and suppose the two bodies interact via a central, inverse-square law force (such as gravitation). In polar coordinates, the orbit equation can be written as [1]

is the separation distance between the two bodies and

is the angle that

makes with the axis of periapsis (also called the true anomaly ). The parameter

is the angular momentum of the orbiting body about the central body, and is equal to

, or the mass multiplied by the magnitude of the cross product of the relative position and velocity vectors of the two bodies. [note 1] The parameter

is the constant for which

equals the acceleration of the smaller body (for gravitation,

is the standard gravitational parameter,

). For a given orbit, the larger

, the faster the orbiting body moves in it: twice as fast if the attraction is four times as strong. The parameter

is the eccentricity of the orbit, and is given by [1]

is the energy of the orbit.

The above relation between

describes a conic section. [1] The value of

controls what kind of conic section the orbit is :

The minimum value of

in the equation is :

, the maximum value is :

after which the object falls back.

becomes such that the orbiting body enters an atmosphere, then the standard assumptions no longer apply, as in atmospheric reentry.

If the horizontal speed is

, then the periapsis distance is

. The energy at the surface of the Earth corresponds to that of an elliptic orbit with

the radius of the Earth), which can not actually exist because it is an ellipse fully below the surface. The energy increase with increase of

is at a rate

. The maximum height above the surface of the orbit is the length of the ellipse, minus

, minus the part "below" the center of the Earth, hence twice the increase of

minus the periapsis distance. At the top[ of what? ] the potential energy is

times this height, and the kinetic energy is

. This adds up to the energy increase just mentioned. The width of the ellipse is 19 minutes[ why? ] times

The part of the ellipse above the surface can be approximated by a part of a parabola, which is obtained in a model where gravity is assumed constant. This should be distinguished from the parabolic orbit in the sense of astrodynamics, where the velocity is the escape velocity.

Consider orbits which are at one point horizontal, near the surface of the Earth. For increasing speeds at this point the orbits are subsequently:

Note that in the sequence above[ where? ],

Extending this to orbits which are horizontal at another height, and orbits of which the extrapolation is horizontal below the surface of the Earth, we get a categorization of all orbits, except the radial trajectories, for which, by the way, the orbit equation can not be used. In this categorization ellipses are considered twice, so for ellipses with both sides above the surface one can restrict oneself to taking the side which is lower as the reference side, while for ellipses of which only one side is above the surface, taking that side.

In gravitationally bound systems, the orbital speed of an astronomical body or object is the speed at which it orbits around either the barycenter or, if one object is much more massive than the other bodies in the system, its speed relative to the center of mass of the most massive body..

In astrodynamics, the orbital eccentricity of an astronomical object is a dimensionless parameter that determines the amount by which its orbit around another body deviates from a perfect circle. A value of 0 is a circular orbit, values between 0 and 1 form an elliptic orbit, 1 is a parabolic escape orbit, and greater than 1 is a hyperbola. The term derives its name from the parameters of conic sections, as every Kepler orbit is a conic section. It is normally used for the isolated two-body problem, but extensions exist for objects following a Klemperer rosette orbit through the galaxy.

The gravitational two-body problem concerns the motion of two point particles that interact only with each other, due to gravity. This means that influences from any third body are neglected. For approximate results that is often suitable. It also means that the two bodies stay clear of each other, that is, the two do not collide, and one body does not pass through the other's atmosphere. Even if they do, the theory still holds for the part of the orbit where they don't. Apart from these considerations a spherically symmetric body can be approximated by a point mass. 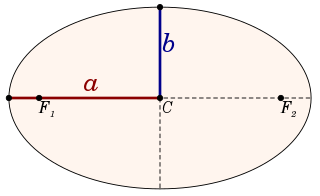