For satellites in geostationary orbit and geosynchronous orbits, the graveyard orbit is a few hundred kilometers beyond the operational orbit. The transfer to a graveyard orbit beyond geostationary orbit requires the same amount of fuel as a satellite needs for about three months of stationkeeping. It also requires a reliable attitude control during the transfer maneuver. While most satellite operators plan to perform such a maneuver at the end of their satellites' operational lives, through 2005 only about one-third succeeded. [2] As of 2011, most[ clarification needed ] recently decommissioned geosynchronous spacecraft were said to have been moved to a graveyard orbit. [3]

beyond the geostationary orbit is:

is the solar radiation pressure coefficient and

is the aspect area [m2] to mass [kg] ratio of the satellite. This formula includes about 200 km for the GEO-protected zone to also permit orbit maneuvers in GEO without interference with the graveyard orbit. Another 35 kilometres (22 mi) of tolerance must be allowed for the effects of gravitational perturbations (primarily solar and lunar). The remaining part of the equation considers the effects of the solar radiation pressure, which depends on the physical parameters of the satellite.

In order to obtain a license to provide telecommunications services in the United States, the Federal Communications Commission (FCC) requires all geostationary satellites launched after March 18, 2002, to commit to moving to a graveyard orbit at the end of their operational life. [5] U.S. government regulations require a boost,

A spacecraft moved to a graveyard orbit will typically be passivated.

While the standard geosynchronous satellite graveyard orbit results in an expected orbital lifetime of millions of years, the increasing number of satellites, the launch of microsatellites, and the FCC approval of large megaconstellations of thousands of satellites for launch by 2022 necessitates new approaches for deorbiting to assure earlier removal of the objects once they have reached end-of-life. Contrary to GEO graveyard orbits requiring three months' worth of fuel (delta-V of 11 m/s) to reach, large satellite networks in LEO require orbits that passively decay into the Earth's atmosphere. For example, both OneWeb and SpaceX have committed to the FCC regulatory authorities that decommissioned satellites will decay to a lower orbit — a disposal orbit—where the satellite orbital altitude would decay due to atmospheric drag and then naturally reenter the atmosphere and burn up within one year of end-of-life. [8] 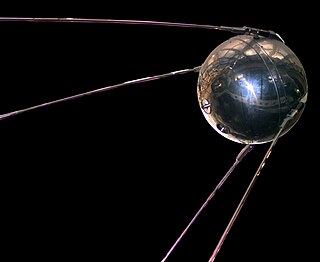 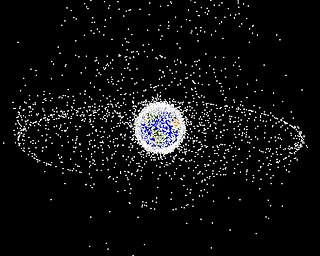 Space debris is defunct artificial objects in space—principally in Earth orbit—which no longer serve a useful function. These include derelict spacecraft—nonfunctional spacecraft and abandoned launch vehicle stages—mission-related debris, and particularly numerous in Earth orbit, fragmentation debris from the breakup of derelict rocket bodies and spacecraft. In addition to derelict man-made objects left in orbit, other examples of space debris include fragments from their disintegration, erosion and collisions or even paint flecks, solidified liquids expelled from spacecraft, and unburned particles from solid rocket motors. Space debris represents a risk to spacecraft.

The Kessler syndrome, proposed by NASA scientist Donald J. Kessler in 1978, is a scenario in which the density of objects in low Earth orbit (LEO) due to space pollution is high enough that collisions between objects could cause a cascade in which each collision generates space debris that increases the likelihood of further collisions. In 2009 Kessler wrote that modeling results had concluded that the debris environment was already unstable, "such that any attempt to achieve a growth-free small debris environment by eliminating sources of past debris will likely fail because fragments from future collisions will be generated faster than atmospheric drag will remove them". One implication is that the distribution of debris in orbit could render space activities and the use of satellites in specific orbital ranges difficult for many generations.

A Tundra orbit is a highly elliptical geosynchronous orbit with a high inclination, an orbital period of one sidereal day, and a typical eccentricity between 0.2 and 0.3. A satellite placed in this orbit spends most of its time over a chosen area of the Earth, a phenomenon known as apogee dwell, which makes them particularly well suited for communications satellites serving high-latitude regions. The ground track of a satellite in a Tundra orbit is a closed figure 8 with a smaller loop over either the northern or southern hemisphere. This differentiates them from Molniya orbits designed to service high-latitude regions, which have the same inclination but half the period and do not loiter over a single region.

Intelsat 2, formerly PAS-2, was a communications satellite operated by Intelsat which spent most of its operational life serving the Pacific Rim market from a longitude of 169° East. Launched in July 1994, the satellite was operated by PanAmSat until it merged with Intelsat in 2006. The spacecraft was renamed, along with the rest of PanAmSat's fleet, on 1 February 2007.

Spacecraft collision avoidance is the implementation and study of processes minimizing the chance of orbiting spacecraft inadvertently colliding with other orbiting objects. The most common subject of spacecraft collision avoidance research and development is for human-made satellites in geocentric orbits. The subject includes procedures designed to prevent the accumulation of space debris in orbit, analytical methods for predicting likely collisions, and avoidance procedures to maneuver offending spacecraft away from danger.