The Richard Wagner Foundation (in German Richard-Wagner-Stiftung) was formed in 1973, when, faced with overwhelming criticism and infighting amongst the descendants of Richard Wagner, [1] the Bayreuth Festival and its assets were transferred to the newly created Foundation. The board of directors included members of the Wagner family and others appointed by the state. [2]

In 2008 the Foundation's 24 board members, mostly descendants of Wagner, selected Katharina Wagner and her sister Eva Wagner-Pasquier to lead the Bayreuth Festival following the decision of Wolfgang Wagner to stand down. [4]

Katharina Wagner is a German opera stage-director and co-director of the Bayreuth Festival. She is the daughter of Wolfgang Wagner, great-granddaughter of Richard Wagner, and great-great granddaughter of Hungarian composer Franz Liszt.

Eva Wagner-Pasquier is a German opera manager. She is the daughter of Wolfgang Wagner and Ellen Drexel. On 1 September 2008, Wagner-Pasquier and her half-sister Katharina Wagner were named as joint directors of the Bayreuth Festival which is largely dedicated to the stage works of their great-grandfather Richard Wagner.

Wolfgang Wagner was a German opera director. He is best known as the director (Festspielleiter) of the Bayreuth Festival, a position he initially assumed alongside his brother Wieland in 1951 until the latter's death in 1966. From then on, he assumed total control until he retired in 2008, although many of the productions which he commissioned were severely criticized in their day. He had been plagued by family conflicts and criticism for many years. He was the son of Siegfried Wagner, the grandson of Richard Wagner, and the great-grandson of Franz Liszt.

Winifred Marjorie Wagner was the English-born wife of Siegfried Wagner, the son of Richard Wagner, and ran the Bayreuth Festival after her husband's death in 1930 until the end of World War II in 1945. She was a friend and supporter of Adolf Hitler, and she and Hitler maintained a regular correspondence.

Klaus Schulze is a German electronic music pioneer, composer and musician. He also used the alias Richard Wahnfried. He was briefly a member of the bands Tangerine Dream, Ash Ra Tempel, and The Cosmic Jokers before launching a solo career consisting of more than 60 albums released across five decades.

Siegfried Wagner was a German composer and conductor, the son of Richard Wagner. He was an opera composer and the artistic director of the Bayreuth Festival from 1908 to 1930.

Wahnfried may refer to: 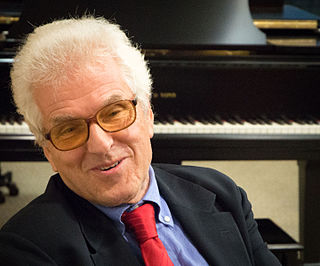 Gottfried Wagner is a multimedia director and publicist.

Baron Hans Paul von Wolzogen, was a German man of letters, editor and publisher. He is best known for his connection with Richard Wagner. 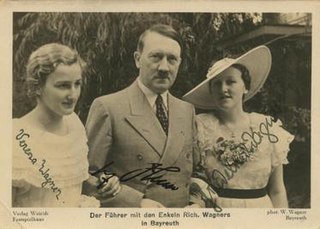 Wahnfried is a 1986 German-French drama film directed by Peter Patzak about the life of Richard Wagner. It was screened out of competition at the 1987 Cannes Film Festival.

Eva Chamberlain (1867–1942) born Eva Maria von Bülow, was the illegitimate daughter of Richard Wagner and Cosima Wagner and the wife of Houston Stewart Chamberlain. When she was born, her mother was still married to Hans von Bülow. Through her mother, she was also a granddaughter of Franz Liszt. With her siblings Isolde and Siegfried, Eva was brought up by a house teacher.