"Romeo" is a song written and recorded by American country music artist Dolly Parton. The song featured fellow country music artists Mary Chapin Carpenter, Pam Tillis, Billy Ray Cyrus, Kathy Mattea and Tanya Tucker. It was released in January 1993 as the first single from the album Slow Dancing with the Moon . The song reached number 27 on the Billboard Hot Country Singles & Tracks chart. The song was nominated for the Grammy Award for Best Country Collaboration with Vocals.

People described the song as featuring Cyrus "as a growling male sex object who is subjected to leering catcalls by Dolly and sidekicks...This equal-opportunity misbehavior is the most memorable thing about 'Romeo.'" [1]

Dolly Rebecca Parton is an American singer, songwriter, multi-instrumentalist, record producer, actress, author, businesswoman, and humanitarian, known primarily for her work in country music. After achieving success as a songwriter for others, Parton made her album debut in 1967 with Hello, I'm Dolly. With steady success during the remainder of the 1960s, her sales and chart peak came during the 1970s and continued into the 1980s. Parton's albums in the 1990s did not sell as well, but she achieved commercial success again in the new millennium and has released albums on various independent labels since 2000, including her own label, Dolly Records. 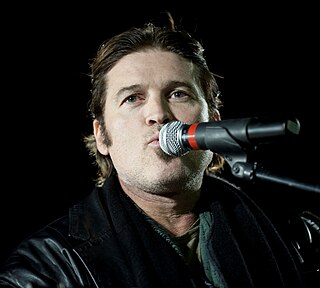 Billy Ray Cyrus is an American singer-songwriter and actor. He has released 16 studio albums and 53 singles since 1992, and is known for his number one single "Achy Breaky Heart", which became the first single ever to achieve triple platinum status in Australia. It was also the best-selling single in the same country in 1992. Due to the song's music video, the line dance rose in popularity.

"I Will Always Love You" is a song written and originally recorded in 1973 by American singer-songwriter Dolly Parton. Her country version of the track was released in 1974 as a single and was written as a farewell to her former partner and mentor of seven years, Porter Wagoner, following Parton's decision to leave The Porter Wagoner Show and pursue a solo career. 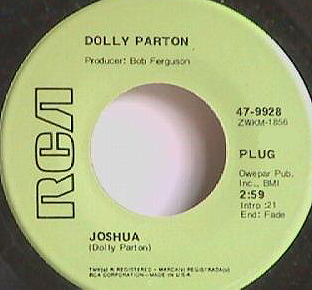 "Joshua" is a song written and recorded by American country music artist Dolly Parton. It was released on November 9, 1970 as the first single and title track from the album Joshua. The song was significant for being her first single to reach number 1 on the US country charts. The single reached number 1 on the Billboard country charts in February 1971. Parton received her first Grammy nomination in the Best Country Female Vocal category for the song, losing to Lynn Anderson. 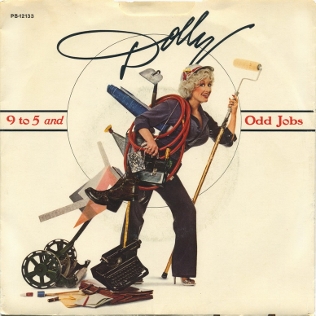 "9 to 5" is a song written and originally performed by American country music entertainer Dolly Parton for the 1980 comedy film of the same name. In addition to appearing on the film soundtrack, the song was the centerpiece of Parton's 9 to 5 and Odd Jobs album, released in late 1980. The song was released as a single in November 1980.

"When I Get Where I'm Going'" is a song written by George Teren and Rivers Rutherford, and recorded by American country music artist Brad Paisley. It was released in October 2005 as second single from his album Time Well Wasted and is his 14th career single. The song features harmony vocals from Dolly Parton. The song was Parton's 25th Billboard No. 1, and Paisley's fifth.

"Starting Over Again" is a song recorded by American entertainer Dolly Parton. The song was written by Donna Summer and her husband Bruce Sudano. Parton's recording was performed as a slow tempo ballad, gradually building to a dramatic crescendo. It was released in March 1980 as the first single from her album Dolly, Dolly, Dolly. "Starting Over Again" made the U.S. pop top forty, peaking at number 36, and reached number 1 on the U.S. country charts on May 24, 1980. 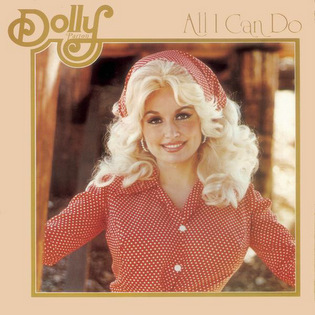 All I Can Do is the seventeenth solo studio album by American singer-songwriter Dolly Parton. It was released on August 16, 1976, by RCA Victor. The album was co-produced by Parton and Porter Wagoner and would be the last of Parton's solo albums to have any involvement from Wagoner. It was nominated for Best Country Vocal Performance, Female at the 19th Annual Grammy Awards. The album spawned three singles: "Hey, Lucky Lady", "All I Can Do", and "Shattered Image". 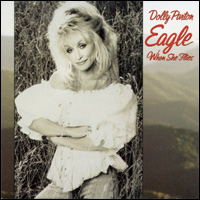 Eagle When She Flies is the thirty-first solo studio album by Dolly Parton. It was released on March 7, 1991. Continuing the country sounds of 1989's White Limozeen, the album featured collaborations with Lorrie Morgan and Ricky Van Shelton; additional supporting vocals were provided by Vince Gill and Emmylou Harris. Dolly Parton's duet with Shelton, "Rockin' Years", topped the country charts, and the follow-up single co-written by Carl Perkins, "Silver and Gold", was a #15 country single. Rounding out the hit singles was the title song "Eagle When She Flies", which only reached a #33 peak, despite spending 20 weeks on the Billboard Country Singles chart. Her duet with Lorrie Morgan, "Best Woman Wins", appeared simultaneously on Lorrie Morgan's 1991 album Something in Red. She co-wrote the song "Family" with Carl Perkins and "Wildest Dreams" with Mac Davis. The album also topped the U.S. country albums charts, Parton's first solo album to reach the top in a decade and reached #24 on the pop albums charts. The album spent 73 weeks on the Billboard Top Country Albums chart. It was her first solo studio album to reach number one album in the United States after 1980's 9 to 5 and Odd Jobs. The album's single week at number one interrupted what would otherwise have been an unbroken run of over 14 months in the top spot for Garth Brooks.

Slow Dancing with the Moon is the thirty-second solo studio album by Dolly Parton. It was released on February 23, 1993. The album features a number of famous guest artists, including Collin Raye, Mary Chapin Carpenter, Kathy Mattea, Tanya Tucker, Maura O'Connell, Billy Dean, Pam Tillis, Marty Stuart and Billy Ray Cyrus. The album released three singles, "Romeo", "More Where That Came From", and "Full Circle". Despite the singles' lackluster chart performance, however, the album itself was well-received critically, and reached number 4 on the U.S. country albums charts - where it spent 35 weeks - and number 16 on the pop albums charts. It ended up being certified Platinum by the Recording Industry Association of America. 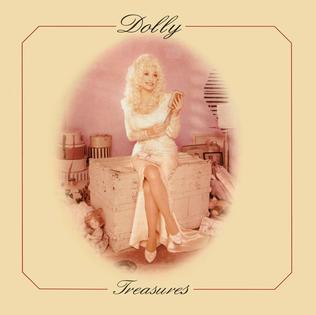 Treasures is the thirty-fourth solo studio album by American singer-songwriter Dolly Parton. It was released on September 24, 1996, by Rising Tide Records and Blue Eye Records. The Steve Buckingham-produced album is made up of covers of rock and country hits from the 1960s, 1970s, and 1980s. 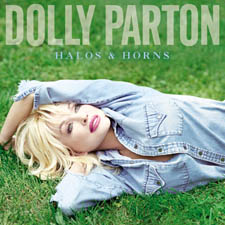 Halos & Horns is the thirty-ninth solo studio album by American singer-songwriter Dolly Parton. It was released on July 9, 2002, by Sugar Hill Records and Blue Eye Records. It is the third album in Parton's critically acclaimed bluegrass trilogy. It continued Parton's experimentation with folk and bluegrass sounds. The album was nominated for the Grammy Award for Best Country Album in 2002, while "Dagger Through the Heart" and "I'm Gone" were both nominated for Best Female Country Vocal Performance in 2002 and 2003, respectively. Parton embarked on her first tour in 10 years in support of the album. The sold-out Halos & Horns Tour played 25 shows throughout the United States and the United Kingdom. The album tracks "These Old Bones" and "Sugar Hill" were adapted into episodes of Dolly Parton's Heartstrings in 2019.

"Jolene" is a song written and performed by American country music artist Dolly Parton. It was released on October 15, 1973 as the first single and title track from her album of the same name, produced by Bob Ferguson. 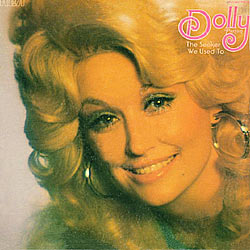 "The Seeker" is a song written and recorded by American country music artist Dolly Parton. It was released as the first single from Parton's 1975 album, Dolly, and was also a top ten single on the U.S. country charts. A spiritual, which Parton described as her "talk with God", the song was released as a single in July 1975, just missing the top spot on the U.S. country singles chart; it peaked at #2.

"Potential New Boyfriend" is a song written by Steve Kipner and John Lewis Parker, and recorded by musician Dolly Parton. The song peaked at number 20 on the U.S. country singles chart. It was released in April 1983 as the only single to be released from Parton's album Burlap & Satin. The song was also popular in discos and dance clubs, and in addition to the standard 45 RPM single, an extended-play dance remix single was released. The single was also accompanied by one of Parton's first music videos, which was directed by Steve Barron.

"Better Get to Livin'" is a song by American singer-songwriter Dolly Parton. It was released on August 28, 2007, exclusively to the iTunes Store as the first release by Parton's own record label, Dolly Records. The song was subsequently sent to country radio on September 28 as the first single from Parton's 2008 album, Backwoods Barbie. An upbeat country pop song, its lyrics deal with keeping a positive attitude and overcoming negative emotions. The song garnered positive reviews from critics and reached number 48 on the Billboard Hot Country Songs chart. The music video featuring Parton and Amy Sedaris premiered November 26.

"To Daddy" is a country song, written by Dolly Parton. It was performed by Emmylou Harris in the 1970s, included on her album Quarter Moon in a Ten Cent Town and released as a single. Having reached number three on Billboard's Hot Country chart, Harris's version is the most familiar to most people.

The singles discography of American singer-songwriter Dolly Parton includes over 100 singles and spans seven decades. Parton has released 151 singles as a lead artist, 37 as a featured artist and 11 promotional singles. Parton has also had three charted B-sides and has released 63 music videos.