Rudy Dhaenens (10 April 1961 – 6 April 1998) was a Belgian professional road bicycle racer who is most famous for winning the World Cycling Championships in 1990 as a member of the Belgian national team.

Dhaenens excelled several times in the Paris–Roubaix classic race; finishing second in 1986 and third the following year. Dhaenens won the 1990 World Championship Road Race, held in Utsunomiya, Japan, ahead of Dirk De Wolf of Belgium and Gianni Bugno of Italy. In 1992, Dhaenens was forced to stop his career because of heart problems. For a long time, he was in the service of the PDM cycling team, usually as tactical captain. Dhaenens was known for his calm, reserved attitude.

He died in 1998, at the age of 36, from head injuries sustained in a car accident in Aalst while driving to the finish of the Tour of Flanders bicycle race. [1] From 1999 to 2007, the Grand Prix Rudy Dhaenens was held in his honour in late March, in Nevele, Belgium. 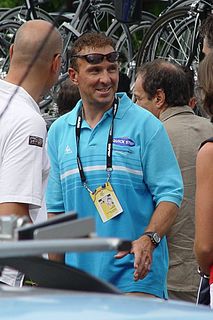 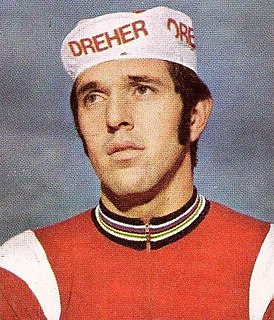 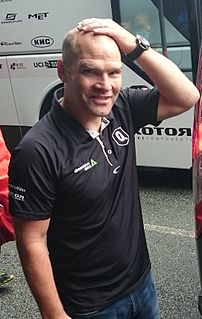 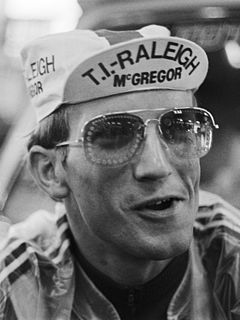 Jan Raas is a Dutch former professional cyclist whose 115 wins include the 1979 World Road Race Championship in Valkenburg, he also won the Tour of Flanders in 1979 and 1983, Paris–Roubaix in 1982 and Milan–San Remo in 1977. He won ten stages in the Tour de France. In six starts, Raas won the Amstel Gold Race five times. In his entire career he competed in 23 of the highly contested "Monument" Races and he finished on the podium in almost half of them: 3rd place six times, 2nd place zero times, and 1st place four times.

Eric Vanderaerden is a retired road cyclist from the town of Lummen, Belgium. 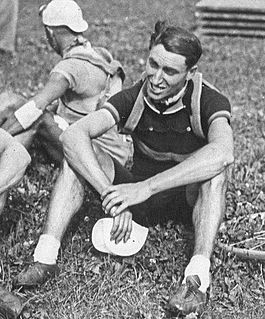 Marcel Kint was a Belgian professional road bicycle racer who won 31 races between 1935 and 1951. His finest year was 1938 when he won the World Cycling Championship, three stages of the Tour de France and the season-long competition equivalent to today's UCI ProTour.

Franciscus ("Frans") Albertus Antonius Johannes Maassen is a directeur sportif. He was a professional road racing cyclist between 1987 and 1995. He completed seven Tour de France stage races, including the 1990 Tour de France where he was involved in the Stage 1 breakaway that caused the rest of the race to be the most surprising Tour in over a decade. He was the only one of the four breakaway riders not to wear the Maillot Jaune, but he won the stage. He twice won the Tour of Belgium, and won the 1994 Tour de Luxembourg. 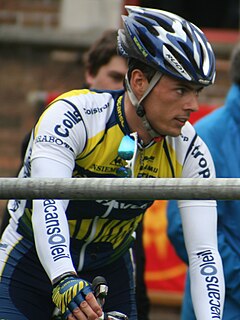 Björn Leukemans is a Belgian former professional road bicycle racer. During 2008 Leukemans was suspended for doping with artificial testosterone. In 2009 he joined the Vacansoleil team. Leukemans joined Wanty–Groupe Gobert for the 2014 season, after his previous team – Vacansoleil–DCM – folded at the end of the 2013 season. Leukemans retired in 2015. 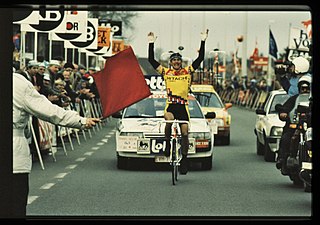 Désiré "Dis" Keteleer was a Belgian professional road bicycle racer. Keteleer was born in Anderlecht and was professional from 1942 until 1961, winning the inaugural Tour of Romandie in 1947 and La Flèche Wallonne in 1946. He rode in the 1949 Tour de France, winning stage 15. Keteleer died in Rebecq-Rognon.

Marc Sergeant is a Belgian former professional road bicycle racer. He competed in the team time trial event at the 1980 Summer Olympics. After Sergeant stopped his cycling career, he became team manager at Lotto–Soudal.

Oliver Naesen is a Belgian professional racing cyclist, who currently rides for UCI WorldTeam AG2R La Mondiale. Considered a specialist of the one-day classics, he won the 2017 Belgian National Road Race Championships, as well as the Bretagne Classic in 2016 and 2018. He is the brother of fellow racing cyclist Lawrence Naesen.

Frans Schoubben was a Belgian racing cyclist. He was declared the joint winner of the 1957 Liège–Bastogne–Liège, along with Germain Derycke.