Cupp was born in Oceanside, California. [1] [2] While growing up, she lived in Andover, Massachusetts, and attended the Academy of Notre Dame. [3] From age six until her late teens, she studied ballet. [4] While attending ballet school, she suffered from eating disorders, and experienced a relapse during her college years. [5] In 2000, Cupp graduated from Cornell University with a Bachelor of Arts degree in art history. While attending Cornell, she worked for The Cornell Daily Sun . In 2010, she earned a Master of Arts degree from the Gallatin School of Individualized Study at New York University with a concentration in Religious Studies. [6]

After graduating from Cornell, Cupp worked for an online magazine and a public relations company. In 2002, Cupp was hired by The New York Times to write and edit for the Index Department. [7] She was also a contributor to Politico.com's The Arena and has been a frequent guest in the past on all three cable news channels – CNN, Fox News, and MSNBC.

In 2011, she was hired as a writer and commentator for Mercury Radio Arts, [9] the organization owned and operated by Glenn Beck. Shortly after being hired by Beck, Cupp was given her own show, "S.E. Cupp" on the Insider Extreme broadcast found on Glennbeck.com. [10] The show was moved to GBTV (now TheBlaze TV).

On June 25, 2012, she began co-hosting The Cycle on MSNBC with political strategist Krystal Ball, pop-culture commentator Touré, and senior Salon political writer Steve Kornacki. [11] Although an atheist herself, on July 5, 2012, Cupp said on The Cycle that she "would never vote for an atheist president." When asked to explain, Cupp said she felt that a president must not represent only 10 to 15 percent of the American populace and that faith served as a "check" on presidential power. [12]

Cupp, who identifies as a Log Cabin Republican, said the Republican Party should support gay marriage. [13] She describes herself as a "mainstream conservative" and criticized Ron Paul's support for a non-interventionist foreign policy. [14]

In March 2013, Cupp pulled out of a CPAC appearance because of its stance on homosexuality and gay marriage, saying that she "became increasingly uncomfortable [aligning] with an event, a great event in many ways, that had nonetheless attempted to marginalize a really important group of conservatives working on our behalf." [15] She has since joined Young Conservatives for the Freedom to Marry. [16]

CNN announced on June 26, 2013, that Cupp would join a new version of Crossfire re-launching in the fall of 2013, with panelists Newt Gingrich, Stephanie Cutter, and Van Jones. [17] [ timeframe? ] Consequently, Cupp left MSNBC and The Cycle, following her final appearance on June 27, 2013. [18]

On March 13, 2017, CNN's sister network HLN announced that Cupp would host a new evening program, S.E. Cupp Unfiltered, in June. [19] In August 2018, the program moved to CNN as a weekly program on Saturday evenings. [20]

In 2018, Tribune Content Agency began syndicating her column, and her columns appear in the New York Daily News . [21]

For over twenty years, Cupp has been an atheist, but has consistently stated that she is open to theism, [24] [25] [26] and once said in an interview with C-SPAN, "I really aspire to be a person of faith some day." [27]

Cupp met John Goodwin, a former chief of staff to Representative Raúl Labrador, at the 2008 Republican Convention, and they began dating in 2011. [28] She and Goodwin became engaged in September 2012, and were married in November 2013. [29] She gave birth to a son, John Davies Goodwin III, in December 2014. [30] Goodwin is currently Head of Communications for The Weather Channel. [31]

Crossfire is an American nightly current events debate television program that aired on CNN from 1982 to 2005 and again from 2013 to 2014. Its format was designed to present and challenge the opinions of a politically liberal pundit and a conservative pundit.

HLN is an American basic cable news channel owned by CNN. The channel primarily carries a schedule of news programming during the daytime hours, with the remainder of its schedule dedicated to true crime programs.

Lizz Winstead is an American comedian, radio, and television personality, and blogger. A native of Minnesota, Winstead is the co-creator of The Daily Show along with Madeleine Smithberg, and served as head writer.

Ashleigh Dennistoun Banfield is a Canadian-American journalist and anchor of Banfield (NewsNation). She is a former host of Legal View with Ashleigh Banfield and Early Start on CNN.

Lisa Kennedy Montgomery, referred to mononymously as Kennedy, is an American political commentator, radio personality, author, and former MTV VJ. As of January 2015, she is the host of Kennedy on the Fox Business Network. Kennedy occasionally hosts Outnumbered on the Fox News Channel, and is a frequent panelist on that network's show The Five. She was the host of MTV's now-defunct daily late-night alternative-rock program Alternative Nation throughout much of the 1990s.

The Conservative Political Action Conference is an annual political conference attended by conservative activists and elected officials from across the United States and beyond. CPAC is hosted by the American Conservative Union (ACU).

Laurie Walker Dhue is an American television journalist. Until April 2015, Dhue hosted episodes of TheBlaze's investigative journalism news magazine For the Record, and presented highlights of evening news on TheBlaze.com TV. Previously she was a Fox News Channel anchor from 2000–2008, reporting for the television show Geraldo at Large and the host of Fox ReportWeekend.

Gregory John Gutfeld is an American television host, producer, political commentator, author, and comedian. He is the host of the late-night talk show The Greg Gutfeld Show and one of five co-hosts and panelists on the political talk show The Five, both of which air on the Fox News Channel. From 2007 to 2015, Gutfeld hosted Red Eye, a late-night talk show that also aired on the Fox News Channel.

Amy Mulenga Holmes is a Zambian-born American journalist and political commentator. Holmes co-hosts, with fellow commentator Michael Gerson, a politically conservative-oriented talk show on PBS titled In Principle. She is a former contributor to NBC News.

Andrew "Andy" Levy is an American commentator and humorist. 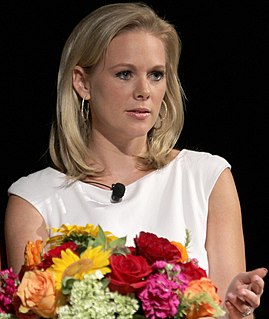 Margaret Claire Hoover is an American conservative political commentator, political strategist, media personality, author, and great-granddaughter of Herbert Hoover, the 31st U.S. President. She is the author of the book American Individualism: How A New Generation of Conservatives Can Save the Republican Party, published by Crown Forum in 2011. Hoover hosts PBS's reboot of the conservative interview show Firing Line. 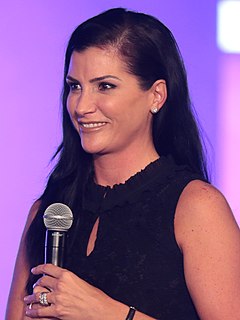 Dana Lynn Loesch is an American radio and TV host. She is a former spokesperson for the National Rifle Association. She is a former writer and editor for Breitbart News and the host of the program Dana on TheBlaze TV from 2014 to 2017. She also hosts a weekday nationally syndicated radio talk show. Loesch has appeared as a guest on television networks such as Fox News, CNN, CBS, ABC, and HBO.

The Cycle was an ensemble news and political talk show that was broadcast on MSNBC and hosted by four network analysts/commentators: Republican Abby Huntsman, author and culture critic Touré Neblett, The Nation correspondent Ari Melber, and former congressional candidate turned Democratic strategist Krystal Ball. Per its ensemble format, all four hosts appear on every show, with each host taking turns to facilitate the discussions.

Stephan Joseph Kornacki is an American political journalist, writer, and television host. Kornacki is a national political correspondent for NBC News. He has written articles for Salon, The New York Observer, The Wall Street Journal, The New York Times, New York Daily News, the New York Post, The Boston Globe, and The Daily Beast. Kornacki was the multimedia anchor and data analyst for much of MSNBC's The Place for Politics campaign coverage, airing throughout 2016.

Real News – formerly known as Real News from The Blaze – was a news talk and political discussion show on TheBlaze presented in a roundtable format. The show aired on weeknights from 6:00-7:00 PM, US Eastern time. Real News also branded TheBlaze news content distributed by radio, website, or mobile device venues. The last episode aired on October 22, 2014.