Playing as SV Nowawes the team gained promotion in 1935 to the first tier Gauliga Berlin-Brandenburg, one of sixteen top flight divisions formed in the re-organization of German football under the Third Reich. The club was relegated after just three seasons at that level never finishing better than eighth in their ten team division. The club returned to the Gauliga as SpVgg Potsdam in 1943 and earned third- and fourth-place finishes in the two years before the end of World War II.

Following the war, occupying Allied authorities ordered the dissolution of all organizations in the country, including sports and football associations. The former membership of SpVgg was re-organized as SG Karl Marx Babelsberg in 1948 in the Soviet-occupied eastern half of the country. On 1 August 1949, they merged with the local club SG Drewitz and the following year were renamed BSG Motor Babelsberg.

The side was a perennial second division team in East Germany's DDR-Liga with the exception of short spells in the third tier in 1968–71, 1972–73, and 1980–81. The club's record in league matches and in regular FDGB-Pokal (East German Cup) tournament appearances was undistinguished. Just prior to German reunification the team suffered relegation from the second division.

On 10 December 1991 Motor adopted the name Sportverein Babelsberg 03. They remained a lower division side in the united Germany until breaking through to the NOFV-Oberliga Nord (IV) in 1996. The team's budget increased tenfold in the period from 1996 to 1999. They immediately captured the league title there and won promotion to the Regionalliga Nordost (III). A second-place finish in 2001 in what had become the Regionalliga Nord (III) advanced the club to the 2. Bundesliga. SV also played its first DFB-Pokal (German Cup) matches in 2000 and 2001, but was eliminated in the early rounds.

Babelsberg's time in the second division was a short one. They finished at the bottom of the table and by 2003–04 had fallen all the way back to the Oberliga (IV). The club declared bankruptcy in 2003 but managed to continue playing through the adoption of a creditor supported bankruptcy plan. SV fielded strong sides and achieved several top three finishes until they were promoted to the Regionalliga Nord (III) for the 2007–08 campaign. In 2009–10 season Babelsberg were promoted back to the 3. Liga after finishing champions of the Regionalliga Nord. After three seasons at this level the club was relegated again in 2013 and now plays in the Regionalliga Nordost again. [2] [3]

Filmstadt Inferno 99 are the clubs ultras group. The fanatics stand in the North part of the stadium. The supporters hold left-wing and anti-fascist political views. [4] As a result, they have strong friendships with St. Pauli and Celtic. They also had a strong friendship with Partizan Minsk, [5] but this was discontinued after the club was disbanded.

Babelsberg 03 have a fierce rivalry with nearby club Energie Cottbus, a faction of whose supporters hold far-right political views. 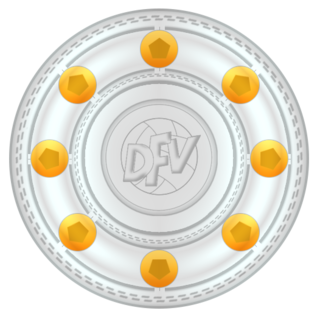 Holstein Kiel is a German association football and sports club based in the city of Kiel, Schleswig-Holstein. From the 1900s through the 1960s the club was one of the most dominant sides in northern Germany. Holstein appeared regularly in the national playoffs, capturing their most important title, the German football championship in 1912, and finishing as vice-champions in 1910 and 1930. Holstein also won six regional titles and finished as runners-up another nine times. They remained a first-division side until the formation of the Bundesliga in 1963.

The German football league system, or league pyramid, refers to the hierarchically interconnected league system for association football in Germany that in the 2016–17 season consists of 2,235 leagues in up to 13 levels having 31,645 teams, in which all divisions are bound together by the principle of promotion and relegation. The top three professional levels contain one division each. Below this, the semi-professional and amateur levels have progressively more parallel divisions, which each cover progressively smaller geographic areas. Teams that finish at the top of their division at the end of each season can rise higher in the pyramid, while those that finish at the bottom find themselves sinking further down. Therefore, in theory, it is possible for even the lowest local amateur club to rise to the top of the system and become German football champions one day. The number of teams promoted and relegated between the divisions varies, and promotion to the upper levels of the pyramid is usually contingent on meeting additional criteria, especially concerning appropriate facilities and finances. 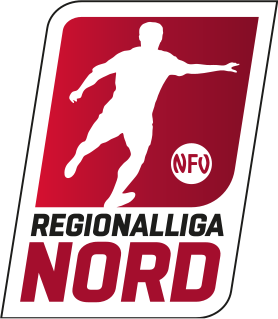 MSV Neuruppin is a German association football club from Neuruppin, Brandenburg. The football team and its youth side is part of a larger sports association of approximately 1,000 members that has departments for athletics, billiards, boxing, chess, disabled sports, gymnastics, hiking, swimming, table tennis, volleyball, and general recreation. 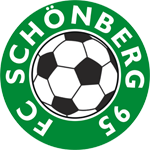 FSV Optik Rathenow is a German association football club who compete in the Regionalliga.

The Brandenburg-Liga (VI) is the highest league for football teams exclusively in the German state of Brandenburg and at step six of the German football league system. Until the introduction of the 3. Liga in 2008 it was the fifth tier of the league system, until the introduction of the Regionalligas in 1994 the fourth tier. The champions of the Brandenburg-Liga are directly promoted to the NOFV-Oberliga Nord. If the champion is from the southern part of the state, it enters the Oberliga Süd.

SpVgg Potsdam was a German association football club from the city of Potsdam, Brandenburg. Founded in 1903 as Sportclub Jugendkraft Nowawes the club was active until the end of World War II when it was disbanded by occupying Allied authorities. A successor side emerged in Soviet-occupied East Germany after the war.

SG Andernach is a German football club from the city of Andernach, Rhineland-Palatinate. The club was formed in 1999 through the merger of the football departments of SpVgg Andernach, BSV 1910 Andernach, and DJK Boulla Andernach based in the earlier association between these sides going back to 1992. SpVgg was the best known of these predecessor sides, having taken part in the first division play in the Gauliga Mittelrhein and Gauliga Moselland under the Third Reich and in the Fußball-Oberliga Rheinland-Pfalz/Saar after World War II.

SG Bornim is a German association football club based in Bornim, an Ortsteil of Potsdam in Brandenburg.

The FSV Velten was a German association football club from the town of Velten, Brandenburg.