Saint John's Seminary, located in the Brighton neighborhood of Boston, Massachusetts, is a Catholic major seminary sponsored by the Roman Catholic Archdiocese of Boston.

Founded in 1884, the seminary has 114 seminarians [2] and approximately 60 lay students, mostly from dioceses in New England.

In 1864, wealthy Boston merchant James Stanworth acquired a farm on a hill in Brighton known as the Hildreth estate. Stanworth suffered losses in the Panic of 1873 and his heirs found he owed substantial debts. Archbishop John Joseph Williams purchased the Hildreth estate and construction of the Boston Ecclesiastical Seminary [3] began in 1881 and was completed in 1884. In 1883, the Commonwealth of Massachusetts granted a Charter to the Seminary to grant degrees in philosophy and divinity. [4] The Archbishop entrusted the seminary to his former teachers, the Sulpicians. [5] Students began classes on September 22, 1884. [6] The First rector was John Baptist Hogan. [7]

The Seminary was incorporated under the laws of Massachusetts in 1892. In 1911, the Sulpicians withdrew from the seminary at the request of Archbishop William Henry O'Connell, [5] who preferred a diocesan faculty more familiar with local conditions.

Cardinal O'Connell Seminary, the archdiocesan minor seminary for high school students in Jamaica Plain, Massachusetts, was merged with Saint John's Seminary in 1968. [3] In 1970 its[ clarification needed ] programs were relocated to a Foster Street site in Saint Clement's Hall.

In the wake of the Catholic Archdiocese of Boston sex abuse scandal enrollment declined from a peak of 86 students in the academic year 2001–02 to 34 for 2005-06. Two years later, the seminary recovered to a student population of 63. [9] [10]

During the 2000s, nearly all the Seminary's land and buildings were sold to Boston College (BC), the neighboring Jesuit-run college. In 2001, Boston College leased St. Clement's Hall, formerly the site of the Seminary's undergraduate division, and it bought the property in June 2004. [11] [12] [13] In May 2007, the Archdiocese sold the Seminary's open land, its library building and several other structures. [14] Rector John Farren, OP resigned and protested the 2007 sale in a letter to Cardinal O'Malley. [9] [13] [15]

After the land sales, the campus of the Seminary consists only of Saint John's Hall. [14]

In August 2018, the rector of Saint John's was placed on administrative leave after two former seminarians claimed on social media that sexual misconduct occurred at the school. [16] The new allegations forced a new investigation by Archdiocese of Boston against Saint John's. [16] On November 22, 2019, the Archdiocese of Boston and former U.S. Attorney Donald Stern concluded that there was some accuracy to the 2018 allegations, such as the expulsion of two students in 2014 for inappropriate sexual conduct, an incident from 2015 where six students received anonymous sexual text messages, and excessive drinking at a 2015 bachelor party which was held on campus. [17] [18] Despite also criticizing Saint John's for having poor leadership, poor financial oversight, and inadequate human formation of seminarians, [17] the joint investigation also concluded that the sexual misconduct which occurred at the seminary was not unlawful. [17] [18] In December 2019, Stephen Salocks, who was named interim rector when the investigation started, replaced Msgr. James Moroney as the Rector of Saint John's Seminary. [19] In addition to promoting Salocks, Boston Archbishop Cardinal Sean Patrick O'Malley also named Fr. Thomas Macdonald as the new Vice Rector. [19]

College-level seminary candidates for the Archdiocese of Boston reside at Our Lady of Providence Seminary College in Providence, Rhode Island and various other institutions.

In addition, "Saint John's Seminary offers a two-year program of initial formation for those candidates who are college graduates and have no prior experience of formal preparation for the sacrament of Holy Orders." [24] Those who complete the Pre-Theology Program may qualify to receive a Bachelor of Philosophy (B.Phil.).

The Seminary's Theological Institute for the New Evangelization offers programs for lay people wishing to work in Roman Catholic ministry, leading to the degrees Master of Theological Studies for the New Evangelization, and Master of Arts in Ministry (MAM). These programs are based at a separate campus in accordance with norms of the Holy See. [25] The MAM division of TINE also offers non-credit catechist training programs in evangelization and apologetics. [26]

The daily schedule includes classes and services in chapel. [31] Seminarians have off-campus pastoral assignments at least once per week. Most seminarians also have a "house job", such as sacristan or bookstore manager. Each seminarian meets with his spiritual director twice monthly. 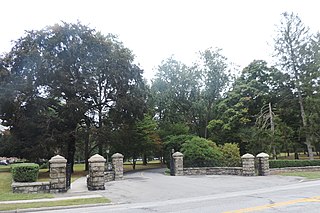 St. Joseph's Seminary and College, sometimes referred to as Dunwoodie after the Yonkers, New York neighborhood it is located in, is the major seminary of the Archdiocese of New York. Its primary mission is to form men for the priesthood in the Catholic Church. It educates men destined to serve within the Archdiocese and other archdioceses and dioceses both in the United States and abroad.

The University of Saint Mary of the Lake (USML) is a private Roman Catholic seminary in Mundelein, Illinois. It is the principal seminary and school of theology for the formation of priests in the Archdiocese of Chicago in Illinois. Chartered by the Illinois General Assembly in 1844, it has the longest continuous academic charter in the state of Illinois. USML is often referred to by the name of its graduate program, Mundelein Seminary. Its compound name is University of Saint Mary of the Lake/Mundelein Seminary. 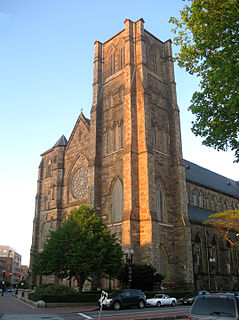 The Archdiocese of Boston is a Latin Church ecclesiastical territory or archdiocese of the Catholic Church located in the New England region of the United States. Its territorial remit encompasses the whole of Essex County, Middlesex County, Norfolk County, and Suffolk County, and also all of Plymouth County except the towns of Marion, Mattapoisett, and Wareham in the Commonwealth of Massachusetts. It is led by a prelate archbishop who serves as pastor of the mother church, Cathedral of the Holy Cross in the South End of Boston. The Archdiocese of Boston is a metropolitan see with six suffragan dioceses: the Dioceses of Burlington, Fall River, Manchester, Portland in Maine, Springfield in Massachusetts, and Worcester. 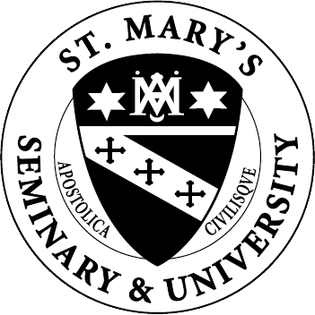 St. Mary's Seminary and University is a Catholic seminary located within the Archdiocese of Baltimore in Baltimore, Maryland; it was the first seminary founded in the United States after the Revolution and has been run since its founding by the Society of the Priests of Saint Sulpice.

Daniel Austin Dowling was an American prelate of the Roman Catholic Church who served as the second archbishop of what was then the Archdiocese of Saint Paul in Minnesota from 1919 until his death.

John Joseph Williams was an American bishop of the Roman Catholic Church. He was the fourth Bishop and first Archbishop of the Archdiocese of Boston, serving between 1866 and his death in 1907. 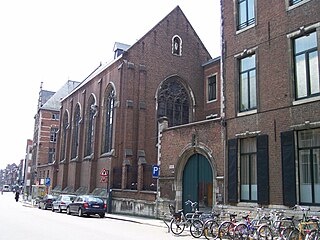 The American College of the Immaculate Conception, or the American College of Louvain is a former Roman Catholic seminary in Leuven, Belgium. Founded in 1857, it was operated by United States Conference of Catholic Bishops (USCCB) to prepare European priests for service in the United States and to provide a residence for Americans priests studying at the Catholic University of Louvain.

Saint Joseph Seminary College is a Catholic seminary in Saint Benedict, Louisiana. Founded in 1891, it is operated by the Benedictine monks of Saint Joseph Abbey and the dioceses in the ecclesiastical provinces of New Orleans and Mobile.

The Saint Paul Seminary is a major seminary located in the Roman Catholic Archdiocese of Saint Paul and Minneapolis. The seminary prepares men to enter the priesthood and educates lay men and women on Catholic theology. 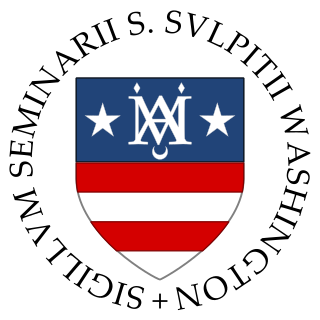 Theological College is the national Catholic diocesan seminary for the Latin Church in the United States. The school was founded in 1917 and is located in Washington, D.C. It is affiliated with the Catholic University of America and is owned and administered by priests of the Society of Saint-Sulpice.

Kenrick–Glennon Seminary is a Roman Catholic seminary for men in Shrewsbury, Missouri that is operated by the Archdiocese of Saint Louis. The seminary is named named after Archbishop Peter Richard Kenrick and Cardinal John J. Glennon, two former archbishops of Saint Louis.

Sacred Heart Major Seminary is a Catholic seminary in Detroit, Michigan. It is associated with the Archdiocese of Detroit.

St. John Fisher Seminary Residence is sponsored by the Roman Catholic Diocese of Bridgeport, Connecticut. Men between the ages of eighteen and forty live at the Seminary while studying subjects based on a liberal arts curriculum, especially philosophy and classical languages, in preparation for graduate theological studies outside of the Diocese. St. John Fisher seminarians are formed to be faithful, perceptive, and well-balanced men. The formation experience at the Seminary is meant to leave an imprint on conscience, character, and manners; it is meant to develop style and to nourish action. 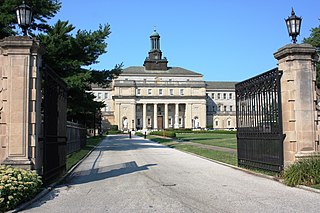 Saint Charles Borromeo Seminary is a Roman Catholic seminary in Wynnewood, Pennsylvania that is under the jurisdiction of the Archdiocese of Philadelphia. The oldest Catholic institution of higher learning in the Philadelphia region, the school is named after Charles Borromeo, an Italian saint from the Counter-Reformation. As of April 2022, Auxiliary Bishop Timothy C. Senior was president of Saint Charles.

St. Thomas Seminary, located in Bloomfield, Connecticut, is a minor seminary for the Roman Catholic Archdiocese of Hartford. The current rector is the Most Reverend Christie A. Macaluso. 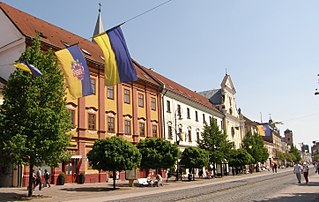 St Charles Borromeo Seminary is the Roman Catholic Major Seminary of the Archdiocese of Košice in Košice, Slovakia.