Speaker of the Riksdag

The Speaker of the Riksdag (Swedish : Riksdagens talman) is the presiding officer of the national unicameral legislature in Sweden.

The Riksdag underwent profound changes in 1867, when the medieval Riksdag of the Estates was abolished. The new form of the Riksdag included two elected chambers, each with its own speaker. Since the de facto introduction of parliamentarism in 1917, the Riksdag has properly functioned as the institution to which the Prime Minister and the Government are held accountable. In 1971 the institution was transformed into a unicameral legislature with 350 members, reduced to 349 in 1976 to avoid parliamentary deadlocks. Since 1975, in accordance with the Instrument of Government of 1974, it is the speaker and no longer the Monarch who appoints and dismisses the Prime Minister.

The current speaker is Andreas Norlén, who has held the gavel since September 2018. [2]

Duties of the speaker

The speaker is the head and presiding officer of the Riksdag, and is elected by the chamber as the first order of business when the Riksdag re-convenes following a general election. As such the speaker coordinates the work that takes place in the Riksdag. The office is mandated in the Swedish constitution and the duties of the office are set out in the Instrument of Government (1974) and the Riksdag Act.

The speaker does not take part in the debates, nor does the speaker participate in the parliamentary committees. While the Speaker is one of the elected representatives of the Riksdag, the speaker is expected to remain unbiased and objective with regards to the political issues that are debated. The speaker has no vote in the Riksdag, and a substitute is appointed to fill his or her seat in the Riksdag.

The position of speaker is the second highest ranked public position in Sweden. In terms of protocol, the Monarch outranks the speaker since the Monarch is the head of state. However, since that position is hereditary a person cannot be elected to become the monarch. In turn, the Speaker nominally outranks the Prime Minister of Sweden, who since the 1974–75 reforms is the country's de jure and de facto chief executive. [3]

Appointment and Dismissal of Prime Minister

One of the more important aspects of the work of the speaker is to head negotiations concerning the forming of a new government in case there is a shift of power after an election. The speaker can then dismiss a prime minister who is voted out of office, which happened for the first time on 25 September 2018. [4] After the negotiations, the speaker proposes the new prime ministerial candidate to the chamber, and following a positive vote, the speaker signs the commission (Swedish : förordnande) on behalf of the Riksdag. The Prime Minister appoints and dismisses their own cabinet ministers, forming the Government (Swedish : Regeringen), without the involvement of the Speaker. [3] [5]

In case of either a voluntary resignation or a vote of no confidence, the letter of resignation of a prime minister is handed to the speaker.

In most other parliamentary systems, including other constitutional monarchies, these duties are instead handled by the head of state. Relieving the Swedish Monarch from exercise of political powers, although not the key objective from the outset, became nevertheless an important part on the constitutional reform in the 1970s.

Main article: List of deputy speakers of the Riksdag

In case all adult members of the Swedish Royal Family who are in the line of succession to the Throne, as prescribed in the Act of Succession, are out of the country, the Speaker assumes the role of Regent ad interim (Swedish : Riksföreståndare). This would also be the case if they were all to decease.

The Speaker chairs the War Delegation (Swedish : Krigsdelegationen), when it is deemed necessary to convene.

Speakers of the unicameral Riksdag (1971–present) 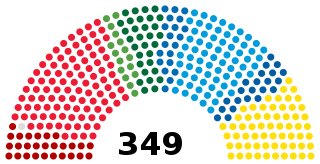 The Riksdag is the national legislature and the supreme decision-making body of Sweden. Since 1971, the Riksdag has been a unicameral legislature with 349 members, elected proportionally and serving, from 1994 onwards, on fixed four-year terms. As of 2021, the 2018 Swedish general election is the most recent held general election.

The monarchy of Sweden concerns the monarchical head of state of Sweden, which is a constitutional and hereditary monarchy with a parliamentary system. There have been kings in what now is the Kingdom of Sweden since time immemorial. Originally an elective monarchy, it became an hereditary monarchy in the 16th century during the reign of Gustav Vasa, though virtually all monarchs before that belonged to a limited and small number of families which are considered to be the royal dynasties of Sweden.

The prime minister is the head of government in Sweden. Before the creation of the office of a prime minister in 1876, Sweden did not have a head of government separate from its head of state, namely the king, in whom the executive authority was vested. Louis Gerhard De Geer, the architect behind the new bicameral Riksdag of 1866 that replaced the centuries-old Riksdag of the Estates, became the first officeholder in 1876. 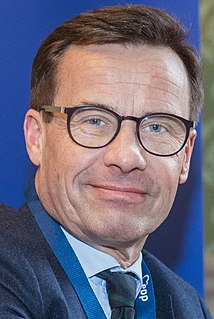 Ulf Hjalmar Ed Kristersson is a Swedish politician who has served as Leader of the Opposition and Leader of the Moderate Party since 2017. He has been a Member of the Riksdag (M) for Södermanland County since 2014 and previously from 1991 to 2000 for Stockholm County. He previously served as Minister for Social Security from 2010 to 2014 and Chairman of the Moderate Youth League from 1988 to 1992.

Per Olof Andreas Norlén is a Swedish Moderate Party politician who has served as Speaker of the Riksdag since September 2018. He has been a Member of the Riksdag (MP) for Östergötland County since October 2006. Norlén has previously been a member of the Committee on the Constitution, 2014–2018 as chair of the committee.

Åsa Lindestam is a Swedish social democratic politician. She has been a member of the Riksdag since 2002 and First Deputy Speaker since September 2018. She is a member of the Committee on Defence and a Swedish member of the Organization for Security and Co-operation in Europe. 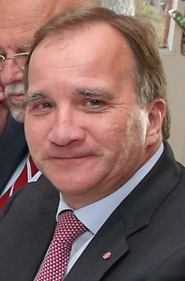 General elections were held in Sweden on 9 September 2018 to elect the 349 members of the Riksdag. Regional and municipal elections were also held on the same day. The incumbent minority government, consisting of the Social Democrats and the Greens and supported by the Left Party, won 144 seats, one seat more than the four-party Alliance coalition, with the Sweden Democrats winning the remaining 62 seats. The Social Democrats' vote share fell to 28.3 percent, its lowest level of support since 1911. 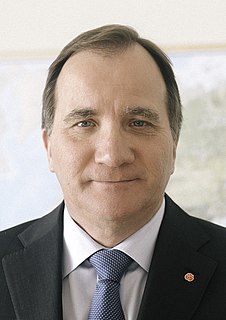 Kjell Stefan Löfven is a Swedish politician who is the current prime minister of Sweden since October 2014, and was leader of the Social Democratic Party from 2012 to 2021.

There are fifteen parliamentary committees in the Riksdag, Sweden's parliament. Each committee is made up of seventeen elected MPs, with at least one member from each political party. Additionally, the committee on EU Affairs, while not one of the standing committees, has a similar role.

Members of Parliament in Sweden sit in the Riksdag. 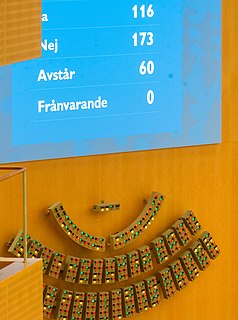 The third cabinet of Stefan Löfven is the present Government of Sweden. It is a coalition, consisting of two parties: the Social Democrats and the Green Party. The cabinet was installed on 9 July 2021, during a formal government meeting with King Carl XVI Gustaf. The government is the result of the aftermath of the 2021 government crisis, which saw Löfven's government removed from power in a vote of no-confidence over proposed reforms to liberalize the rent control system.

Prime Minister Stefan Löfven tendered his resignation on 10 November 2021, leaving his government in place as a caretaker cabinet until a new Prime Minister is elected by the Riksdag. Government formation talks commenced the following day with Magdalena Andersson, the newly-elected head of the Social Democratic party offering to lead a government. She was formally nominated to form a government by the Speaker of the Riksdag, Andreas Norlén later the same day. It is the third government formation process since the 2018 general election, the first taking a record 144 days before the formation of Löfven's second cabinet. The process took place just ten months ahead of the 2022 general election.

The Andersson cabinet is the designated incoming Government of Sweden, following the resignation of PM Stefan Löfven and the election of Magdalena Andersson as his successor. It was expected to be a coalition, consisting of two parties: the Social Democrats and the Green Party. However, in a late turn of events after the confirmation vote, the Green Party left the government cooperation due to the government's budget proposal failing in the Riksdag. The cabinet were orginally planned to be installed on 26 November 2021, during a formal government meeting with King Carl XVI Gustaf, but due to a precedent regarding changes in a government's composition, Andersson is expected to need a new confirmation vote. This is to make sure she still has the Riksdag's approval. Such a vote is scheduled to be held on Monday 29 September 2021.