Last updated July 28, 2021
Addition of a finite sequence of numbers
This article is about sums of several elements. For more elementary aspects, see Addition. For infinite sums, see Series (mathematics). For other uses, see Summation (disambiguation).

In mathematics, summation is the addition of a sequence of any kind of numbers, called addends or summands; the result is their sum or total. Beside numbers, other types of values can be summed as well: functions, vectors, matrices, polynomials and, in general, elements of any type of mathematical objects on which an operation denoted "+" is defined.

Summations of infinite sequences are called series. They involve the concept of limit, and are not considered in this article.

Very often, the elements of a sequence are defined, through regular pattern, as a function of their place in the sequence. For simple patterns, summation of long sequences may be represented with most summands replaced by ellipses. For example, summation of the first 100 natural numbers may be written as 1 + 2 + 3 + 4 + ⋯ + 99 + 100. Otherwise, summation is denoted by using Σ notation, where

is an enlarged capital Greek letter sigma. For example, the sum of the first n natural numbers can be denoted as

For long summations, and summations of variable length (defined with ellipses or Σ notation), it is a common problem to find closed-form expressions for the result. For example, [lower-alpha 1]

Although such formulas do not always exist, many summation formulas have been discovered—with some of the most common and elementary ones being listed in the remainder of this article.

Mathematical notation uses a symbol that compactly represents summation of many similar terms: the summation symbol,

, an enlarged form of the upright capital Greek letter sigma. This is defined as

where i is the index of summation; ai is an indexed variable representing each term of the sum; m is the lower bound of summation, and n is the upper bound of summation. The "i = m" under the summation symbol means that the index i starts out equal to m. The index, i, is incremented by one for each successive term, stopping when i = n. [lower-alpha 2]

Here is an example showing the summation of squares:

In general, while any variable can be used as the index of summation (provided that no ambiguity is incurred), some of the most common ones include letters such as

; the latter is also often used for the upper bound of a summation.

Alternatively, index and bounds of summation are sometimes omitted from the definition of summation if the context is sufficiently clear. This applies particularly when the index runs from 1 to n. [2] For example, one might write that:

One often sees generalizations of this notation in which an arbitrary logical condition is supplied, and the sum is intended to be taken over all values satisfying the condition. For example:

in the specified range,

over all positive integers

There are also ways to generalize the use of many sigma signs. For example,

is the same as

A similar notation is applied when it comes to denoting the product of a sequence, which is similar to its summation, but which uses the multiplication operation instead of addition (and gives 1 for an empty sequence instead of 0). The same basic structure is used, with

, an enlarged form of the Greek capital letter pi, replacing the

It is possible to sum fewer than 2 numbers:

These degenerate cases are usually only used when the summation notation gives a degenerate result in a special case. For example, if

in the definition above, then there is only one term in the sum; if

, then there is none.

Summation may be defined recursively as follows:

In the notation of measure and integration theory, a sum can be expressed as a definite integral,

is the subset of the integers from

is the counting measure.

Given a function f that is defined over the integers in the interval [m, n], the following equation holds:

This is the analogue of the fundamental theorem of calculus in calculus of finite differences, which states that:

is the derivative of f.

An example of application of the above equation is the following:

Using binomial theorem, this may be rewritten as:

where f is a function defined on the nonnegative integers. Thus, given such a function f, the problem is to compute the antidifference of f, a function

This function is defined up to the addition of a constant, and may be chosen as [3]

There is not always a closed-form expression for such a summation, but Faulhaber's formula provides a closed form in the case where

and, by linearity, for every polynomial function of n.

Many such approximations can be obtained by the following connection between sums and integrals, which holds for any increasing function f:

and for any decreasing function f:

For summations in which the summand is given (or can be interpolated) by an integrable function of the index, the summation can be interpreted as a Riemann sum occurring in the definition of the corresponding definite integral. One can therefore expect that for instance

since the right hand side is by definition the limit for

of the left hand side. However, for a given summation n is fixed, and little can be said about the error in the above approximation without additional assumptions about f: it is clear that for wildly oscillating functions the Riemann sum can be arbitrarily far from the Riemann integral.

for a bijection σ from a finite set A onto a set B (index change); this generalizes the preceding formula.

(a variant of the preceding formula)

(a particular case of the formula above)

(another application of commutativity and associativity)

(splitting a sum into its odd and even parts, for even indexes)

(splitting a sum into its odd and even parts, for odd indexes)

Powers and logarithm of arithmetic progressions

for every c that does not depend on i

(Sum of the simplest arithmetic progression, consisting of the first n natural numbers.) [3] :52

(Sum of first even natural numbers)

(A sum of logarithms is the logarithm of the product)

More generally, one has Faulhaber's formula for

denotes a Bernoulli number, and

is a binomial coefficient.

In the following summations, a is assumed to be different from 1.

(sum of a geometric progression)

(sum of an arithmetico–geometric sequence)

There exist very many summation identities involving binomial coefficients (a whole chapter of Concrete Mathematics is devoted to just the basic techniques). Some of the most basic ones are the following.

expresses the sum of the binomial distribution

In the following summations,

is the number of k-permutations of n.

(that is the nth harmonic number)

(that is a generalized harmonic number)

for real c greater than −1

for real c greater than 1

In number theory, an arithmetic, arithmetical, or number-theoretic function is for most authors any function f(n) whose domain is the positive integers and whose range is a subset of the complex numbers. Hardy & Wright include in their definition the requirement that an arithmetical function "expresses some arithmetical property of n".

In mathematics, the classic Möbius inversion formula is a relation between pairs of arithmetic functions, each defined from the other by sums over divisors. It was introduced into number theory in 1832 by August Ferdinand Möbius.

In mathematics, and specifically in number theory, a divisor function is an arithmetic function related to the divisors of an integer. When referred to as the divisor function, it counts the number of divisors of an integer. It appears in a number of remarkable identities, including relationships on the Riemann zeta function and the Eisenstein series of modular forms. Divisor functions were studied by Ramanujan, who gave a number of important congruences and identities; these are treated separately in the article Ramanujan's sum. 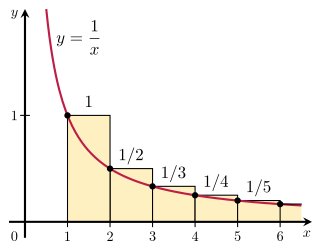 Anatoly Alexeyevich Karatsuba was a Russian mathematician working in the field of analytic number theory, p-adic numbers and Dirichlet series.

In mathematics, the FEE method is the method of fast summation of series of a special form. It was constructed in 1990 by Ekaterina A. Karatsuba and was called FEE – fast E-function evaluation – because it makes fast computations of the Siegel -functions possible, in particular of .