Last updated June 06, 2021
Value that a function or sequence "approaches" as the input or index approaches some value
This article is about the general notion of limit in calculus. For more specific cases, see Limit of a sequence and Limit of a function. For other uses, see Limit § Mathematics.

In mathematics, a limit is the value that a function (or sequence) approaches as the input (or index) approaches some value. [1] Limits are essential to calculus and mathematical analysis, and are used to define continuity, derivatives, and integrals.

In formulas, a limit of a function is usually written as

Limit of a function

Main article: Limit of a function

Suppose f is a real-valued function and c is a real number. Intuitively speaking, the expression

means that f(x) can be made to be as close to L as desired, by making x sufficiently close to c. [3] In that case, the above equation can be read as "the limit of f of x, as x approaches c, is L".

Augustin-Louis Cauchy in 1821, [4] followed by Karl Weierstrass, formalized the definition of the limit of a function which became known as the (ε, δ)-definition of limit. The definition uses ε (the lowercase Greek letter epsilon) [2] to represent any small positive number, so that "f(x) becomes arbitrarily close to L" means that f(x) eventually lies in the interval (L − ε, L + ε), which can also be written using the absolute value sign as |f(x) − L| < ε. [4] The phrase "as x approaches c" then indicates that we refer to values of x, whose distance from c is less than some positive number δ (the lower case Greek letter delta)—that is, values of x within either (c − δ, c) or (c, c + δ), which can be expressed with 0 < |x − c| < δ. The first inequality means that the distance between x and c is greater than 0 and that x ≠ c, while the second indicates that x is within distance δ of c. [4]

The above definition of a limit is true even if f(c) ≠ L. Indeed, the function f need not even be defined at c.

then f(1) is not defined (see indeterminate forms), yet as x moves arbitrarily close to 1, f(x) correspondingly approaches 2: [5]

Thus, f(x) can be made arbitrarily close to the limit of 2—just by making x sufficiently close to 1.

This can also be calculated algebraically, as

for all real numbers x ≠ 1.

In addition to limits at finite values, functions can also have limits at infinity. For example, consider the function

Limit of a sequence

Main article: Limit of a sequence

Formally, suppose a1, a2, … is a sequence of real numbers. One can state that the real number L is the limit of this sequence, namely:

which is read as

"The limit of an as n approaches infinity equals L"

Intuitively, this means that eventually, all elements of the sequence get arbitrarily close to the limit, since the absolute value |an − L| is the distance between an and L. Not every sequence has a limit; if it does, then it is called convergent , and if it does not, then it is divergent. One can show that a convergent sequence has only one limit.

In non-standard analysis (which involves a hyperreal enlargement of the number system), the limit of a sequence

can be expressed as the standard part of the value

of the natural extension of the sequence at an infinite hypernatural index n=H. Thus,

represented in the ultrapower construction by a Cauchy sequence

, is simply the limit of that sequence:

In this sense, taking the limit and taking the standard part are equivalent procedures.

A formal definition of convergence can be stated as follows. Suppose

is a sequence that converges to

with a fixed point

, there is a nice checklist for checking the convergence of the sequence

Computability of the limit

Limits can be difficult to compute. There exist limit expressions whose modulus of convergence is undecidable. In recursion theory, the limit lemma proves that it is possible to encode undecidable problems using limits. [9] 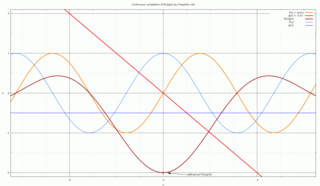 In the branch of mathematics known as real analysis, the Riemann integral, created by Bernhard Riemann, was the first rigorous definition of the integral of a function on an interval. It was presented to the faculty at the University of Göttingen in 1854, but not published in a journal until 1868. For many functions and practical applications, the Riemann integral can be evaluated by the fundamental theorem of calculus or approximated by numerical integration. 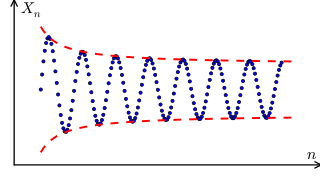 In mathematics, a sequence is an enumerated collection of objects in which repetitions are allowed and order matters. Like a set, it contains members. The number of elements is called the length of the sequence. Unlike a set, the same elements can appear multiple times at different positions in a sequence, and unlike a set, the order does matter. Formally, a sequence can be defined as a function whose domain is either the set of the natural numbers, or the set of the first n natural numbers. Sequences are one type of indexed families as an indexed family is defined as a function which domain is called the index set, and the elements of the index set are the indices for the elements of the function image. 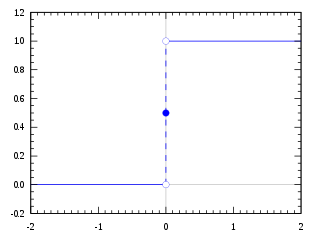 In mathematics, uniform integrability is an important concept in real analysis, functional analysis and measure theory, and plays a vital role in the theory of martingales. The definition used in measure theory is closely related to, but not identical to, the definition typically used in probability.

In calculus, the (ε, δ)-definition of limit is a formalization of the notion of limit. The concept is due to Augustin-Louis Cauchy, who never gave a formal definition of limit in his Cours d'Analyse, but occasionally used ε, δ arguments in proofs. It was first given as a formal definition by Bernard Bolzano in 1817, and the definitive modern statement was ultimately provided by Karl Weierstrass. It provides rigor to the following informal notion: the dependent expression f(x) approaches the value L as the variable x approaches the value c if f(x) can be made as close as desired to L by taking x sufficiently close to c.