The Pride of Palomar

A print of this film is preserved in the Library of Congress collection. [3] [4]

Set at the "Rancho El Palomar", it was filmed largely at Rancho Guajome and Mission San Luis Rey in Vista and Oceanside, CA, respectively. As such, it gives some valuable glimpses of these two historical sites as they were about a century ago (though the back of the ranch building was stuccoed for the movie, which one can still see at Guajome). It also shows a few scenes featuring Pullman porters and dining cars of the 1920s. The movie was unusual in showing some kind of themed background to the intertitles.

Forrest Stanley was an American actor and screenplay writer best known for his work in silent film. He is particularly known for his role as Charles Brandon in the historical film When Knighthood Was in Flower (1922) by Robert G. Vignola and Charles Wilder in the murder mystery film The Cat and the Canary (1927) directed by Paul Leni. 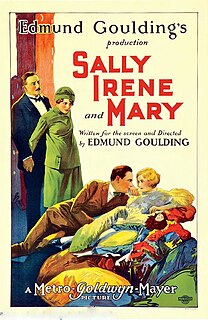 Sally, Irene, and Mary is a 1925 American silent comedy-drama film starring Constance Bennett, Sally O'Neil, and Joan Crawford. It is based on the 1922 play of the same name by Eddie Dowling and Cyrus Woods. The play was adapted again in 1938, again titled Sally, Irene, and Mary and directed by William A. Seiter. That version stars Alice Faye, Joan Davis, and Marjorie Weaver in the title roles, and co-starred Tony Martin, Fred Allen, and Jimmy Durante.

Leap Year is an American silent comedy film directed by and starring Roscoe Arbuckle. Though produced in 1921, the film was not released in the United States due to Arbuckle's involvement in the Virginia Rappe death scandal; it received its first release in Finland in 1924. The film finally saw an American release of sorts in 1981. Prints are held by the UCLA Film and Television Archive and Library of Congress.

The Tongues of Men is a 1916 silent film drama produced by the Oliver Morosco Company and distributed by Paramount Pictures. Frank Lloyd directed and English stage actress Constance Collier stars in her debut film. The story is based on a 1913 Broadway play, The Tongues of Men, by Edward Childs Carpenter and starring Henrietta Crosman.

Gambling Wives is a 1924 American silent melodrama film. Directed by Dell Henderson and produced by actor-producer Ben F. Wilson, it was released through Arrow Films. The film stars Marjorie Daw.

Penrod and Sam is a 1923 American silent comedy drama film directed by William Beaudine and starring Ben Alexander, Joe Butterworth, and Buddy Messinger. Wendy L. Marshall stated that "Beaudine had the Midas touch when it came to directing children" in films like this and Boy of Mine. In 1931, Beaudine directed a sound adaptation of the novel.

The Tomboy is a 1924 American silent comedy drama film directed by David Kirkland and starring Herbert Rawlinson and Dorothy Devore.

Out of the Darkness is a 1915 American drama silent film directed by George Melford and written by Hector Turnbull. The film stars Charlotte Walker, Thomas Meighan, Marjorie Daw, Hal Clements, Tom Forman and Loyola O'Connor. The film was released on September 9, 1915, by Paramount Pictures.

Undressed is a lost 1928 silent film drama directed by Phil Rosen and starring David Torrence, Hedda Hopper and Virginia Brown Faire. It was produced and released by independent Sterling Pictures.

The Pinch Hitter is a 1917 American silent comedy drama film directed by Victor Schertzinger and starring Charles Ray. It was produced by Thomas H. Ince and released by Triangle Film Corporation.

Hurricane's Gal is a 1922 American silent adventure film produced, written and directed by Allen Holubar and starring his wife Dorothy Phillips. It was distributed through Associated First National Pictures.

The Barefoot Boy is a 1923 American silent drama film directed by David Kirkland and starring John Bowers, Marjorie Daw, and Sylvia Breamer. The film is based upon a poem of the same name by John Greenleaf Whittier.