In theatre, a platform (also referred to as a riser or rostrum) is a stationary, standard flat walking surface for actors to perform on. Typically, they are built to be assembled modularly. They are often used to provide varying levels, to make a show more visually interesting. They are also used to separate areas on stage, and as seating bleachers. This is in contrast to scenery wagons, which are mobile platforms that are supported by casters instead of feet.

A scenery wagon, also known as a stage wagon, is a mobile platform that is used to support and transport movable, three-dimensional theatrical scenery on a theater stage. In most cases, the scenery is constructed on top of the wagon such that the wagon, and the scenery it supports, forms a single, integrated structure. Heavy duty casters are mounted to the underside of the platform so that the entire assembly can be quickly moved onstage or offstage, so as to facilitate rapid scenery changes during live productions. Scenery wagons are built in a wide range of sizes, ranging from less than one square foot up to the size of the playing area of the stage.

Platforms are composed of a frame, a lid, and legs. 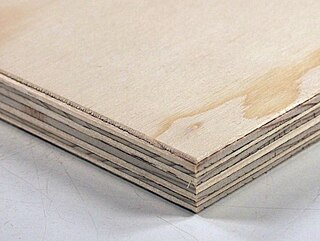 Plywood is a material manufactured from thin layers or "plies" of wood veneer that are glued together with adjacent layers having their wood grain rotated up to 90 degrees to one another. It is an engineered wood from the family of manufactured boards which includes medium-density fibreboard (MDF) and particle board (chipboard). 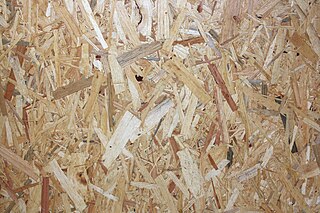 Oriented strand board (OSB), also known as flakeboard, sterling board and aspenite in British English, is a type of engineered wood similar to particle board, formed by adding adhesives and then compressing layers of wood strands (flakes) in specific orientations. It was invented by Armin Elmendorf in California in 1963. OSB may have a rough and variegated surface with the individual strips of around 2.5 cm × 15 cm, lying unevenly across each other and comes in a variety of types and thicknesses. 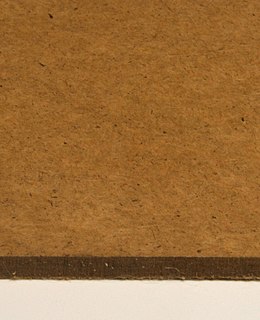 Hardboard, also called high-density fiberboard (HDF), is a type of fiberboard, which is an engineered wood product.

Framing is most commonly made of nominally 2"x4" lumber or rectangular steel tubing, oriented so that its longer dimension is vertical, perpendicular to the lid. Framing is usually arranged to be at or near every edge of the lid. In addition, intermediate members (sometimes called toggles) are added. Common rules of thumb dictate that the lid should not overhang the framing by more than three inches, and that internal framing should be two feet or less apart. 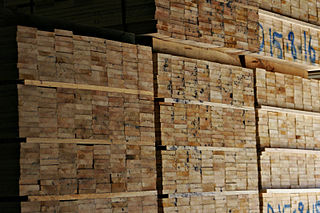 Lumber or timber is a type of wood that has been processed into beams and planks, a stage in the process of wood production. Lumber is mainly used for structural purposes but has many other uses as well.

Wooden framed platforms usually use 2x4 legs, which rest just inside of the framing, under the lid, with a cleat which supports the framing. Steel framed platforms are often built with brackets to affix legs made of steel pipe. When large numbers of platforms are being used together, a stud wall is assembled to support seams between platforms, instead of using legs at all.

Often, platforms that are kept in stock have coffin locks inset in their framing or lids, in order to fasten them to adjacent platforms. The legs or stud walls that support the platform typically require diagonal cross bracing, often made of very thin lumber.

Coffin lock is a slang term for a blind panel connector often used in scenic construction to join together stage decks or scenery in a butt joint. These are two part connectors that draw together and lock. The two most common types are the cam and acceptor and more traditional hook and pin version. These devices generally use a hex key to operate the locking mechanism via a small diameter hole either through the face or rear of the panel. When locked, the considerable mechanical advantage offered by the cam or hook holds the panels tightly together. Coffin locks can be installed directly into a mortise cut into each panel for total concealment except for the locking hole or mounted to the rear of the panels. Many small theatres use stock platforms with coffin locks built into the frames.

Many theatres maintain a 'stock' collection of platforming, which can be reused in any show. 4'x8' platforms are most common, although 6'x4' and 4'x4' are also quite common. These theatres also maintain standard sized legs, and often stair units which reach their standard height platforms.

A floor is the bottom surface of a room or vehicle. Floors vary from simple dirt in a cave to many-layered surfaces modern technology. Floors may be stone, wood, bamboo, metal or any other material that can support the expected load. 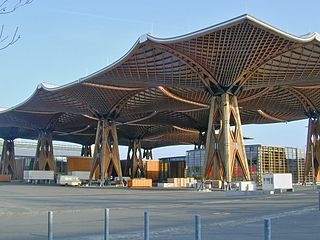 Engineered wood, also called composite wood, man-made wood, or manufactured board, includes a range of derivative wood products which are manufactured by binding or fixing the strands, particles, fibres, or veneers or boards of wood, together with adhesives, or other methods of fixation to form composite materials. These products are engineered to precise design specifications which are tested to meet national or international standards. Engineered wood products are used in a variety of applications, from home construction to commercial buildings to industrial products. The products can be used for joists and beams that replace steel in many building projects. 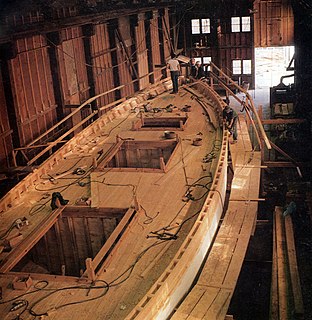 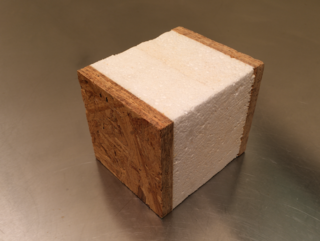 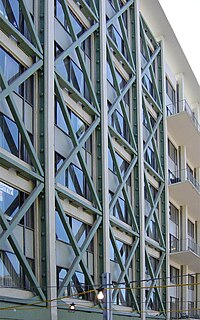 Seismic retrofitting is the modification of existing structures to make them more resistant to seismic activity, ground motion, or soil failure due to earthquakes. With better understanding of seismic demand on structures and with our recent experiences with large earthquakes near urban centers, the need of seismic retrofitting is well acknowledged. Prior to the introduction of modern seismic codes in the late 1960s for developed countries and late 1970s for many other parts of the world, many structures were designed without adequate detailing and reinforcement for seismic protection. In view of the imminent problem, various research work has been carried out. State-of-the-art technical guidelines for seismic assessment, retrofit and rehabilitation have been published around the world – such as the ASCE-SEI 41 and the New Zealand Society for Earthquake Engineering (NZSEE)'s guidelines. These codes must be regularly updated; the 1994 Northridge earthquake brought to light the brittleness of welded steel frames, for example. 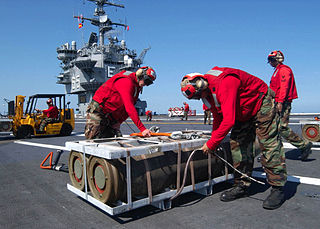 A crate is a large shipping container, often made of wood, typically used to transport or store large, heavy items. Steel and aluminium crates are also used. Specialized crates were designed for specific products, and were often made to be reusable, such as the "bottle crates" for milk and soft drinks.

Laminated veneer lumber (LVL) is an engineered wood product that uses multiple layers of thin wood assembled with adhesives. It is typically used for headers, beams, rimboard, and edge-forming material. LVL offers several advantages over typical milled lumber: Made in a factory under controlled specifications, it is stronger, straighter, and more uniform. Due to its composite nature, it is much less likely than conventional lumber to warp, twist, bow, or shrink. LVL is a type of structural composite lumber, comparable to Glued laminated timber (Gluelam) but with a higher allowable stress.

Framing, in construction, is the fitting together of pieces to give a structure support and shape. Framing materials are usually wood, engineered wood, or structural steel. The alternative to framed construction is generally called mass wall construction, where horizontal layers of stacked materials such as log building, masonry, rammed earth, adobe, etc. are used without framing. 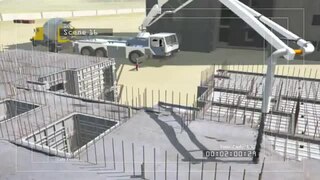 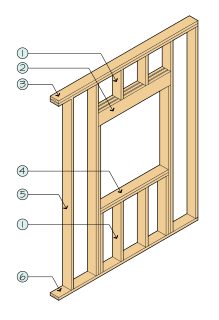 A plate or wall plate is a horizontal, structural, load-bearing member in wooden building framing.

A wall stud is a vertical framing member in a building's wall of smaller cross section than a post. They are a fundamental element in frame building.

Blocking is a general, American English term for the use of short pieces (blocks) of dimensional lumber in wood framed construction. Uses include filling, spacing, joining, or reinforcing members. Blocking is typically made from short off-cuts or defective, warped pieces of lumber. The term Blocking is also sometimes used by people in construction to refer to discontinuous shims or spacers. Names for similar materials in other forms of English include dwang, nog, noggin, and nogging.

Cross-laminated timber (CLT) is a wood panel product made from gluing layers of solid-sawn lumber together. Each layer of boards is oriented perpendicular to adjacent layers and glued on the wide faces of each board, usually in a symmetric way so that the outer layers have the same orientation. An odd number of layers is most common, but there are configurations with even numbers as well. Regular timber is an anisotropic material, meaning that the physical properties change depending on the direction at which the force is applied. By gluing layers of wood at perpendicular angles, the panel is able to achieve better structural rigidity in both directions. It is similar to plywood but with distinctively thicker laminations.

Stone cladding is a thin layer of real or simulated stone applied to a building or other structure made of a material other than stone. Stone cladding is sometimes applied to concrete and steel buildings as part of their original architectural design.