Thomas Fergus was born in Ayr Scotland on 6 April 1850. [1] There is some question as to his date of birth as the New Zealand Government records are two years different from this birth record, and his newspaper obituary gives 1851 as the birth year. [2]

His father was also Thomas Fergus. It is uncertain when his father was born as there is no birth certificate to coincide with the date of 1815, however there is record of him in both 1851 and 1861 census for Scotland, and the age in those suggest that his birth was in 1807. [1] His mother Annie McGechin is also found in census records but no birth certificate has been found to verify her date of birth, although the census suggests her date of birth to be in 1810. [1] In the 1851 census for Scotland the household included his paternal grandmother Elizabeth Fergus. The family is registered as living in Gordon Place, St Quivox, Ayr at the time of the 1861 Census for Scotland and included seven surviving children (Elizabeth, Thomas, Martha Grange, Robert, John, Ann, Margaret). He was the second to eldest and the eldest son. [1]

He initially travelled to Melbourne on the Esmerelda in the early 1860s. [3] It is thought that he may have travelled with two sisters and a brother, although this needs to be verified.[ citation needed ] He later travelled on to New Zealand in 1869. He was educated in both Melbourne and at the University of Otago in Dunedin, New Zealand from 1872 to 1876 and worked as a civil engineer. [3] [4]

On 8 July 1874 he married Letticia Mckay at Hampden, North Otago, at the house of her father. [5] They had one daughter, Margaret Annie, born in 1875 at Cromwell, Otago. Letticia died at Hampden on 27 September 1876, aged 22. [6] She is buried in the Hampden cemetery.[ citation needed ]

Fergus died on 29 September 1914. [2] Lake Fergus, a small lake between Lake Te Anau and Milford Sound and adjacent to the State Highway 94 (the Milford Sound Road) in Fiordland National Park, is named after him. William H. Homer (after whom the Homer Tunnel is named) and George Barber named it on 4 January 1889 after the then Member of Parliament for the Wakatipu electorate. After a brief ceremony, they "drank his health from a bottle of painkiller". [14] [15]

James William Thomson was a 19th-century conservative Member of Parliament in New Zealand. 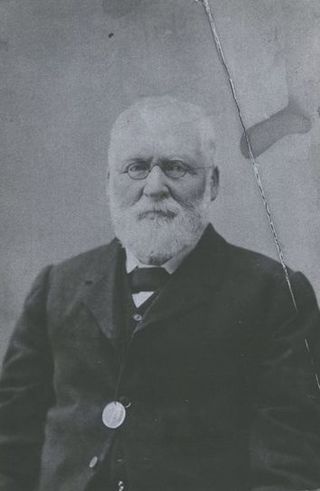 Hampden was a parliamentary electorate in the Otago region of New Zealand, from 1861 to 1870. The electorate was centred on the town of Hampden.

Thomas Fraser was a 19th-century Member of Parliament in Otago, New Zealand.

Hugh Joseph Finn was a 19th-century Member of Parliament in the Otago region of New Zealand.

Donald Reid was a Scottish-born 19th-century farmer, landowner, and businessman in Otago, New Zealand. A member of the Otago Provincial Council he was later a Member of Parliament for ten years between 1866 and 1878.

John Hyde Harris was a 19th-century New Zealand politician. Born in England, he came to Dunedin as a young man and practised as a lawyer, and was then a judge. He entered provincial politics and was elected as the fourth Superintendent of the Otago Province. He then became Mayor of Dunedin and was called to the Legislative Council.

Matthew Holmes was a New Zealand politician and runholder. He was a member of the New Zealand Legislative Council for 35 years (1866–1901). Holmes was from Ireland and made his money in Victoria from farming, exporting wool, and supplying the gold fields. The family lived in Scotland for some years but Holmes moved to New Zealand. His family followed him years later and they lived for most of their time in Otago, but retired to Wellington.