Thomas Scott House is a historic home located in East Fallowfield Township, Chester County, Pennsylvania. The house was built about 1796, and is a two-story, three bay, stuccoed stone, vernacular Federal style dwelling. It has a one-story stone addition and full width front porch with Eastlake brackets. [2]

It was added to the National Register of Historic Places in 1985. [1] 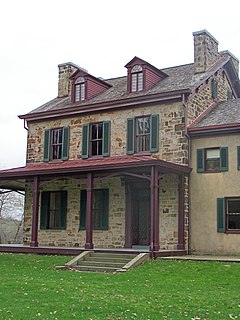 Friendship Hill was the home of early American politician and statesman Albert Gallatin (1761–1849). Gallatin was a U.S. Congressman, the longest-serving Secretary of the Treasury under two presidents, and ambassador to France and Great Britain. The house overlooks the Monongahela River near Point Marion, Pennsylvania, about 50 miles (80 km) south of Pittsburgh. 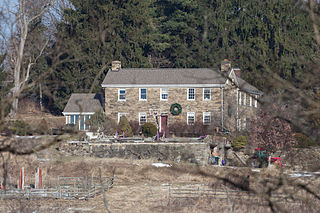 Thomas Munce House is a historic house in South Strabane Township, Washington County, Pennsylvania. The earliest section was built in c. 1803 with additions in c. 1810 and 1835. The house is ​2 1⁄2-story, stone, vernacular, Georgian-influenced with a gabled roof and a façade with five openings. The house is representative of the more substantial second-generation houses built to replace earlier log houses in Washington County. 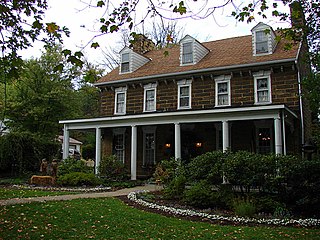 Hill's Tavern is a historic building in Scenery Hill, Pennsylvania. It was heavily damaged by a fire that started shortly before midnight on August 17, 2015. For a period in the early 1900s, the inn was known as Central Hotel. Now called the Century Inn, it has been claimed to have been the oldest tavern in continuous use on the National Road, until the fire brought an end to its 221 years of continuous operation. 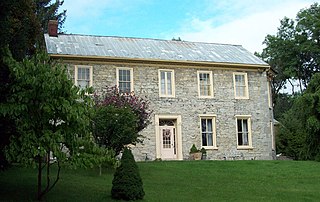 William Thomas House, also known as Wren's Nest and the Thomas Homestead, is a historic home located at Bellefonte, Centre County, Pennsylvania. It consists of two sections: an "L"-shaped stone house built about 1785, and a two-story, five bay rectangular limestone house in the Georgian style architecture. The latter was built in 1834. 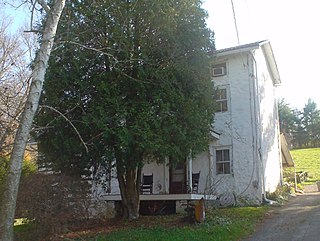 The John Cheyney Log Tenant House and Farm, also known as the Thomas Huston Farm, is a historic home and associated buildings located at Cheyney, Delaware County, Pennsylvania. The complex includes four contributing buildings, dated from c. 1760 to c. 1870: a part log, part stucco over stone vernacular residence; a stone and frame barn; a "garage" containing a forge and farm kitchen; and a stone spring house. The residence, or tenant house, consists of a 1 1/2-story log section, built about 1800, connected to a 3-story stucco over stone section, built between 1815 and 1848. 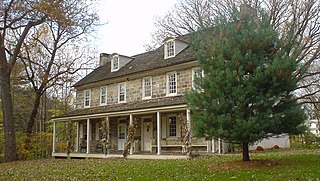 Collen Brook Farm, also known as Collenbrook, is a historic home and associated buildings located at Upper Darby Township, Delaware County, Pennsylvania. The complex includes three contributing buildings: a farmhouse, a granite spring house, and stone and frame carriage house. The house is a ​2 1⁄2-story, vernacular stone residence with a Georgian plan and consisting of three sections. The oldest section was built around 1700, with additions made in 1774, and 1794. It was the home of noted educator and political leader George Smith (1804–1882).

Thomas H. Thompson House, also known as Wayside Manor, is a historic home located at Brownsville, Fayette County, Pennsylvania. It was built in 1906, and is a 3 1/2-story brick dwelling with Spanish Colonial Revival style design details. It has a hipped roof clad with red Spanish tile, dormers on three sides of the roof, a full width front porch, and carved stone detailing. Also on the property is a two-story, hipped roof carriage house built in 1917–1918. 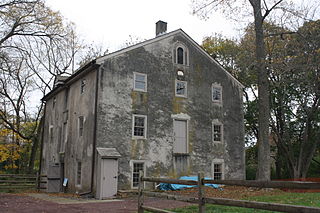 Springfield Mill, also known as the Piper-Streeper Mill, is a historic gristmill located along the Wissahickon Creek in Erdenheim, Springfield Township, Montgomery County, Pennsylvania. It is a building on the Bloomfield Farm tract, now part of Morris Arboretum.

The Beck House, also known as the Old Scott House, is a historic home located at Sunbury, Northumberland County, Pennsylvania. It was included by the Pennsylvania Historical and Museum Commission in its Inventory of Historical Places in April 1975, and was added to the National Register of Historic Places in 1976. 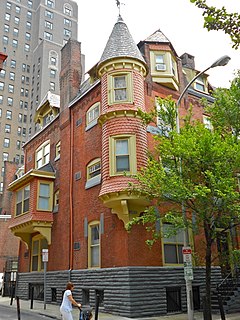 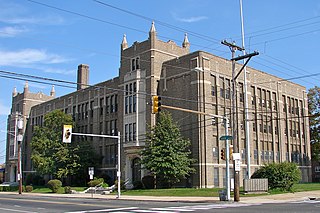 Universal Creighton Charter School is a historic school located in the Crescentville neighborhood of Philadelphia, Pennsylvania. It is currently in use as a charter school. The building was designed by Irwin T. Catharine and built in 1929–1930. It is a three-story, eight-bay, brick building on a raised basement in the Late Gothic Revival style. Additions were built in 1931 and 1954. It features entrances with arched stone surrounds, brick piers with terra cotta capitals, and a crenellated battlement with four small towers. 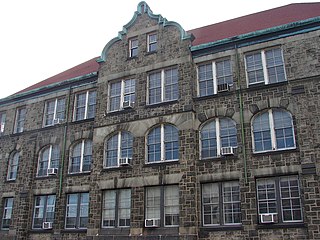 Thomas Powers School is a historic school building located in the Port Richmond neighborhood of Philadelphia, Pennsylvania. It was built in 1899–1900, and is a three-story, square, granite building with basement in the Romanesque style. It sits on a stone foundation and features a projecting round arched tower, stepped Flemish gable, and hipped roof with large projecting chimneys. 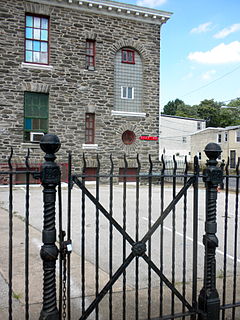 Thomas Meehan School is a historic former school building located in the Germantown neighborhood of Philadelphia, Pennsylvania. It was built in 1901–1902, and is a two-story, five bay, stone building in the Colonial Revival-style. It features a portico with Doric order columns, arched openings, and a modillioned cornice. It was used for industrial purposes in the mid-20th century, and now is home to the Pentecostal Faith Assembly Church. 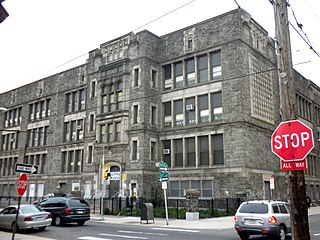 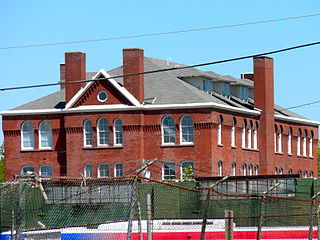 St. Anthony de Padua Parish School is a historic Catholic school building located in the Southwest Center City neighborhood of Philadelphia, Pennsylvania. It was built in 1897, and is a four-story, red brick building with stone trim in the Romanesque Revival-style. It has rounded arched window openings, a hipped roof with dormer, and freestanding brick fire tower. 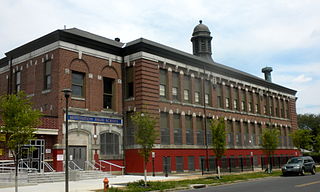 Thomas Buchanan Read School is a historic school building located in the Elmwood Park neighborhood of Philadelphia, Pennsylvania. It was designed by Henry deCoursey Richards and built in 1906–1908. It is a two-story, 20 bay, red brick building with limestone trim in the Georgian Revival-style. It features a large projecting section, recessed entrance bays, brick piers with stone capitals, and a hipped roof with copper cupola. 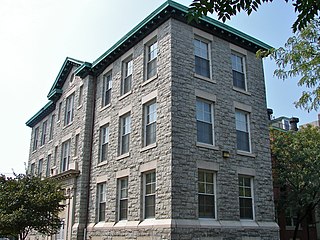 Thomas Dunlap School is a historic former school building located in the Haddington neighborhood of Philadelphia, Pennsylvania. It was built in 1906, and is a three-story, nine bay by two bay, ashlar stone building in the Colonial Revival-style. It features a projecting, center cross gable bay, paired pilasters flanking the main entrance, and a modillioned copper cornice. 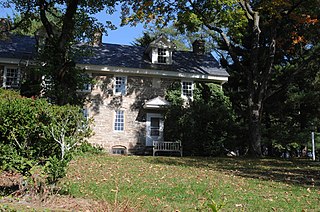 Thomas and Lydia Gilbert Farm, also known as the Datestone Farm, is a historic home and farm located at Holicong, Buckingham Township, Bucks County, Pennsylvania. The original section of the farmhouse was built in 1711, with additions made in 1735 and 1812. Each section is marked with a datestone. The house consists of two 2 1/2-story, stone sections with a unifying cornice, roofline, and slate-covered gable roof. It is in a vernacular Georgian style. The house was restored in 1970–1972. and a frame addition completed on the west side of the house. Also on the property are a contributing stone and frame bank barn, stone and frame wagon house, and a stone spring house with a datestone of 1808. 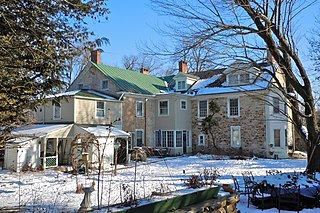 Oaklands is a historic home located in West Whiteland Township, Chester County, Pennsylvania. The original house was built in 1772, and is a two-story, three-bay rectangular stone structure. It has a major wing to the east, with an addition to that wing. The front of the wing has a two-story front porch with decorative iron supports. Also on the property is a contributing 1/1/2-story stuccoed stone gatehouse, remodeled in 1900 as a private school for the Thomas children.