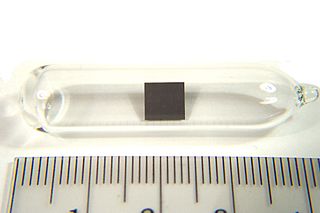 Thorium is a weakly radioactive metallic chemical element with symbol Th and atomic number 90. Thorium is silvery and tarnishes black when it is exposed to air, forming thorium dioxide; it is moderately hard, malleable, and has a high melting point. Thorium is an electropositive actinide whose chemistry is dominated by the +4 oxidation state; it is quite reactive and can ignite in air when finely divided.

Silicon is a chemical element with symbol Si and atomic number 14. It is a hard and brittle crystalline solid with a blue-grey metallic lustre; and it is a tetravalent metalloid and semiconductor. It is a member of group 14 in the periodic table: carbon is above it; and germanium, tin, and lead are below it. It is relatively unreactive. Because of its high chemical affinity for oxygen, it was not until 1823 that Jöns Jakob Berzelius was first able to prepare it and characterize it in pure form. Its melting and boiling points of 1414 °C and 3265 °C respectively are the second-highest among all the metalloids and nonmetals, being only surpassed by boron. Silicon is the eighth most common element in the universe by mass, but very rarely occurs as the pure element in the Earth's crust. It is most widely distributed in dusts, sands, planetoids, and planets as various forms of silicon dioxide (silica) or silicates. More than 90% of the Earth's crust is composed of silicate minerals, making silicon the second most abundant element in the Earth's crust after oxygen. 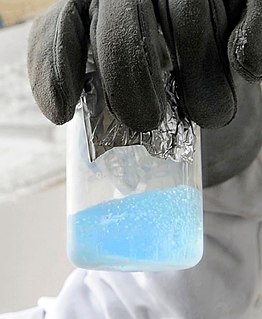 Oxygen is a chemical element with symbol O and atomic number 8. It is a member of the chalcogen group on the periodic table, a highly reactive nonmetal, and an oxidizing agent that readily forms oxides with most elements as well as with other compounds. By mass, oxygen is the third-most abundant element in the universe, after hydrogen and helium. At standard temperature and pressure, two atoms of the element bind to form dioxygen, a colorless and odorless diatomic gas with the formula O
2. Diatomic oxygen gas constitutes 20.8% of the Earth's atmosphere. As compounds including oxides, the element makes up almost half of the Earth's crust.