The three-banded plover, or three-banded sandplover (Charadrius tricollaris), is a small wader. This plover is resident and generally sedentary in much of East Africa, southern Africa and Madagascar. It occurs mainly on inland rivers, pools, lakes and pans, frequening their exposed shores. This species is often seen as single individuals, but it will form small flocks. It hunts by sight for insects, worms and other invertebrates. Three-banded plovers have a sharp whistled weeet-weet call. Its larger and darker-plumaged sister species, Forbes's plover, replaces it in West Africa and in the moist tropics. The two species have largely allopatric breeding ranges. Both species present a distinctively elongated profile, due to their proportionally long tail and wings.

In flight, showing the white front and white side of the tail and rump. The long wings feature a thin white bar above, and a dark smudge over the primary coverts below.

The adult three-banded plover is 18 cm in length. It has long wings and a very long tail, and therefore looks different from most other small plovers in flight, the exception being the closely related Forbes's plover.

The adult three-banded plover has medium brown upperparts, and the underparts are white except for the two black breast bands, separated by a white band, which give this species its common and scientific names. The head is strikingly patterned, with a black crown, white supercilia extending from the white forehead to meet on the back of the neck, and a grey face becoming brown on the neck. The orbital ring is orange-red, and the base of the otherwise black bill is rosy red in colour.

The Madagascan subspecies C. t. bifrontatus has a grey band between the bill and the white forehead, and the sides of the head are grey. A genetic study reported genetic differentiation between Madagascar and the mainland population. [2] The sexes are similar with respect to plumage and size. Juveniles of the nominate and Madagascan subspecies also resemble the adults, although the forehead is brownish for a short time, and the wing coverts show buff fringes. [3] This species is distinguished from the larger and darker Forbes's plover in that the latter has a brown forehead and lacks a white wingbar.

Its nest is a bare scrape on shingle. Egg laying occurs from March to June in the tropics, [3] but mainly (over 70%) from July to October (i.e. late winter to early spring) in southern Africa. [4] [5] 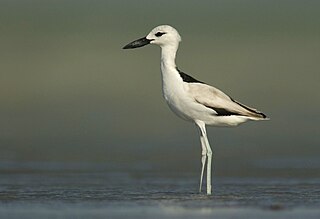 The crab-plover or crab plover is a bird related to the waders, but sufficiently distinctive to merit its own family Dromadidae. Its relationship within the Charadriiformes is unclear, some have considered it to be closely related to the thick-knees, or the pratincoles, while others have considered it closer to the auks and gulls. It is the only member of the genus Dromas and is unique among waders in making use of ground warmth to aid incubation of the eggs. 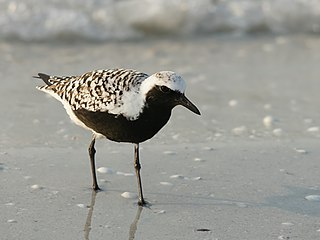 The grey plover or black-bellied plover is a medium-sized plover breeding in Arctic regions. It is a long-distance migrant, with a nearly worldwide coastal distribution when not breeding. 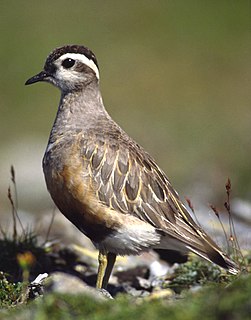 The Eurasian dotterel, also known in Europe as just dotterel, is a small wader in the plover family of birds.

The African wattled lapwing, also known as the Senegal wattled plover or simply wattled lapwing, is a large lapwing, a group of largish waders in the family Charadriidae. It is a resident breeder in most of sub-Saharan Africa outside the rainforests, although it has seasonal movements.

Charadrius is a genus of plovers, a group of wading birds. The genus name Charadrius is a Late Latin word for a yellowish bird mentioned in the fourth-century Vulgate. They are found throughout the world. 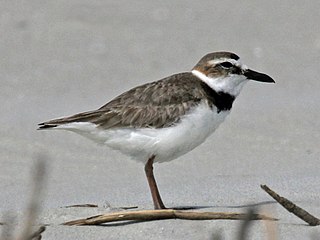 Wilson's plover is a small bird of the family Charadriidae.

The Egyptian plover, also known as the crocodile bird, is a wader, the only member of the genus Pluvianus. Formerly placed in the pratincole and courser family, Glareolidae, it is now regarded as the sole member of its own monotypic family Pluvianidae.

Kittlitz's plover is a small shorebird in the family Charadriidae that breeds near coastal and inland saltmarshes, sandy or muddy riverbanks or alkaline grasslands with short vegetation. It is native to much of Sub-Saharan Africa, the Nile Delta and Madagascar. It is thought to be mainly monogamous and has monomorphic plumage.

The collared plover is a small shorebird in the plover family, Charadriidae. It lives along coasts and riverbanks of the tropical to temperate Americas, from central Mexico south to Chile and Argentina.

The black-winged lapwing or greater black-winged lapwing is an east African species that is found from the Ethiopian highlands in the north to central Kenya, and again at middle to coastal elevations in eastern South Africa. It is a habitat specialist of short grass in well-watered temperate grasslands. They may move about locally to find ideal situations, often at night. In their tightly grouped flying flocks they resemble plovers.

The blacksmith lapwing or blacksmith plover is a lapwing species that occurs commonly from Kenya through central Tanzania to southern and southwestern Africa. The vernacular name derives from the repeated metallic 'tink, tink, tink' alarm call, which suggests a blacksmith's hammer striking an anvil.

The white-fronted plover or white-fronted sandplover is a small shorebird of the family Charadriidae that inhabits sandy beaches, dunes, mudflats and the shores of rivers and lakes in sub-saharan Africa and Madagascar. It nests in small shallow scrapes in the ground and lays clutches of one to three eggs. The species is monogamous and long-lived, with a life expectancy of approximately 11 years. The vast majority of pairs that mate together stay together during the following years of breeding and retain the same territory. The white-fronted plover has a similar appearance to the Kentish plover, with a white fore crown and dark bands connecting the eyes to the bill.

The oriental plover, also known as the oriental dotterel, is a medium-sized plover closely related to the Caspian plover. It breeds in parts of Mongolia and China, migrating southwards each year to spend its non-breeding season in Indonesia, New Guinea and northern Australia.

Forbes's plover or Forbes's banded plover, is a small wader. This plover is resident in much of west Africa, mainly on inland rivers, pools and lakes. Its nest is a scrape lined with small pebbles in rocky uplands. After breeding in the wet season, this bird moves to open grasslands, including airfields and golf courses, in the dry season. It is sometimes seen at pools or reservoirs.

The African snipe also known as the Ethiopian snipe, is a small stocky wader. It breeds in eastern and southern Africa in wet mountain moorland and swamps at altitudes of 1,700–4,000 m (5,600–13,100 ft). When not breeding it disperses widely, including into coastal lowlands.

The river lapwing is a lapwing species which breeds from the Indian Subcontinent eastwards to Southeast Asia. It range includes much of northern and northeastern India, and extends through Southeast Asia to Vietnam. It appears to be entirely sedentary. Formerly also called spur-winged lapwing, this name is better reserved for one of the "spur-winged plovers" of old, Vanellus spinosus of Africa, whose scientific name it literally translates. The masked lapwing of Australasia was at one time also called "spur-winged plover", completing the name confusion - particularly as none of these is a plover in the strict sense. 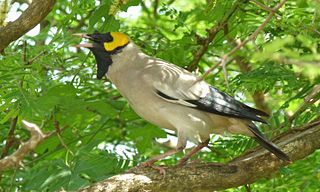 The wattled starling is a nomadic resident bird in eastern and southern Africa. It is a species of grassland, open woodland, and cultivation.

The Madagascar plover, also known as the black-banded plover, is a small monogamous shorebird in the family Charadriidae, native to western Madagascar. It inhabits shores of lagoons, coastal grasslands, and breeds in salt marshes. These plovers mainly nest in open grassland and dry mudflats surrounding alkaline lakes. The species is classified as vulnerable by the IUCN because of its low breeding success, slow reproductive rate, and weak adaptation to increasing habitat loss, leading to declining population numbers.