The three-toed box turtle (Terrapene triunguis) is a species within the genus of hinge-shelled turtles commonly referred to as box turtles. This species is native to the south-central part of the United States and is the official reptile of the state of Missouri. [3]

Three-toed box turtles are so named due to the number of toes on the back feet, but some think that there are some four-toed examples too. However, some speculate that the four-toed individuals are actually eastern box turtle × three-toed box turtle hybrids. Three-toed box turtles have a domed shell which grows to 5-7″ (13-18cm) in length. [4] The highest part of its carapace or upper shell is more posteriorly positioned than in any of the other subspecies. [5] The dorsal and limb coloration is commonly completely absent, although some dark blotches are common in adult turtles. These areas more often being a uniform olive green or tan color. Sometimes, faint yellow dots or lines are visible in the center of each large scute. [6] In the males, the head and throat often display yellow, red, or orange spots. [5] [7] Frequently, the bottom shell or plastron is a straw yellow color, and has far fewer dark markings than the plastrons of the other subspecies. [8]

From the west to the east of its range, the three-toed box turtle can be found from eastern Texas to the northern edge of the Florida Panhandle. Its northernmost range is in Missouri and Kansas, while the southernmost one is in Louisiana. [9] Three-toed box turtles interbreed with other subspecies of common box turtles which overlap the borders of this area. An example of this occurs in the eastern Mississippi valley, where this species is difficult to distinguish from the eastern box turtle. [10] Being popular in the pet trade, three-toed box turtles are sometimes found well outside of their home range. It is not known whether such captives when released into the wild have any impact on the local species of such areas. These turtles are adaptive, and are possibly the only box turtle who can live happily in an indoor enclosure. [11]

Three-toed box turtles are omnivores, their diets varying with availability of food sources and the seasons. They are known to eat earthworms, insects, snails, slugs, strawberries, mushrooms, and green-leafed vegetation. They have been observed eating the eggs of quail. All box turtles will prefer live foods to vegetation.

It has also been speculated that these turtles eat poisonous mushrooms, but are not themselves sickened by the mushroom's toxins. Afterwards, the turtles then become poisonous themselves. Carr [12] believes this to be the reason why a group of boys in Mississippi became ill after eating roasted three-toed box turtles.

As pets, they have been reported to eat mealworms, corn, melon, crickets, waxworms, tomatoes, cooked eggs, fruit, and even moist dog food. Diet should consist of approximately 50% plants and 50% animal protein. [4] They can be shy about being watched while eating, and may stop and stare back motionless if this happens. Multivitamin supplement and cuttlebone for calcium are required as part of the captive diet.

Three-toed box turtles are known to migrate seasonally in order to maintain their preferred humidity level. In Arkansas, three-toed box turtles were observed in grasslands in late spring, while in early spring, summer, and late fall they were found in forested areas. [13] During dry times, they dig shallow burrows into leaf litter to conserve moisture. When water is available, these turtles soak for longer periods of time than any of the other subspecies. [10]

An indoor enclosure should have a high temperature side with a heat bulb at around 85 °F and a lower temperature side at 70-75 °F. Humidity should average between 60-80%. The enclosure should also contain at least one humid cave or hideout for the turtle as well as an area where it can soak. A T5 HO UVB lamp of appropriate strength is required for survival indoors. Peat moss, coconut fiber, and clean topsoil all make acceptable substrates. Desert materials such as gravel or sand would be too dry and difficult for the turtle to dig into, and will cause small scratches susceptible to infections. Many owners simply spray the surface area of the enclosure down at the beginning of the day in order to moisten the material and to increase the humidity of the enclosure.

With good care, three-toed box turtles are capable of living for at least 50 years. [4]

Blanding's turtle is a semi-aquatic turtle of the family Emydidae. This species is native to central and eastern parts of Canada and the United States. It is considered to be an endangered species throughout much of its range. Blanding's turtle is of interest in longevity research, as it shows little to no common signs of aging and is physically active and capable of reproduction into eight or nine decades of life. 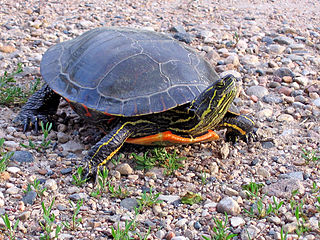 The painted turtle is the most widespread native turtle of North America. It lives in slow-moving fresh waters, from southern Canada to northern Mexico, and from the Atlantic to the Pacific. They have been shown to prefer large wetlands with long periods of innundation and emergent vegetation. This turtle is a member of the genus Chrysemys, which is part of the pond turtle family Emydidae. Fossils show that the painted turtle existed 15 million years ago. Three regionally based subspecies evolved during the last ice age. The southern painted turtle is alternately considered the only other species in Chrysemys, or another subspecies of C. picta.

The chicken turtle is a turtle native to the southeastern United States. It is the only extant member of the genus Deirochelys and is a member of the freshwater marsh turtle family Emydidae. The chicken turtle's scientific name refers to its extremely long neck and distinctive net-like pattern on its upper shell. There are three regionally distinct subspecies, which are thought to have evolved when populations became separated during periods of glaciation. These subspecies can be distinguished by their appearance; the western chicken turtle displays dark markings along the seams of its plastron, while the plastron of the Florida subspecies is a bright yellow or orange color. Fossil records show that the chicken turtle has been present in the region for up to five million years.

Pseudemys is a genus of large, herbivorous, freshwater turtles of the eastern United States and adjacent northeast Mexico. They are often referred to as cooters, which stems from kuta, the word for turtle in the Bambara and Malinké languages, brought to America by enslaved people from Africa.

Box turtles are North American turtles of the genus Terrapene. Although box turtles are superficially similar to tortoises in terrestrial habits and overall appearance, they are actually members of the American pond turtle family (Emydidae). The 12 taxa which are distinguished in the genus are distributed over seven species. They are largely characterized by having a domed shell which is hinged at the bottom, allowing the animal to retract its head and legs and close its shell tightly to protect itself from predators. 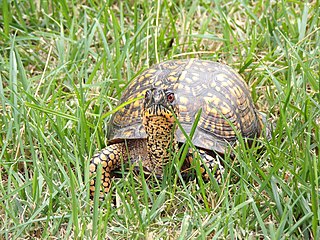 The eastern box turtle is a subspecies within a group of hinge-shelled turtles normally called box turtles. T. c. carolina is native to the eastern part of the United States.

The common box turtle is a species of box turtle with six existing subspecies. It is found throughout the Eastern United States and Mexico. The box turtle has a distinctive hinged lowered shell that allows it to completely enclose itself. Its upper jaw is long and curved.

Sternotherus is a genus of turtles in the family Kinosternidae including six species commonly known as musk turtles. The genus is endemic to North America, occurring in the eastern third of the USA and southeast Ontario, Canada. Musk glands positioned near the bridge of the shell can produce foul smelling secretions when the turtles are threatened, although genital handling does not normally provoke a response. Sternotherus are moderately small turtles, with the largest species in the genus, the razor-backed musk turtle, attaining a maximum of 17.6 cm. in shell length. The carapace is characteristically oval and domed, with most species having one or three keels on the back which may become smoother and obscure with age in some species. Musk turtles are generally drab in color, mostly black, gray, brown, olive, or ocher, which aid in camouflaging them in their natural habitats. The head is relatively large and stout, marked with spots, streaks, or strips. The plastron has only 10 or 11 scutes, as opposed to 12, a more common condition in North American turtles. The tail is short, with males having a horny claw like tip.

The Chinese box turtle, also known as the yellow-margined box turtle, or golden-headed turtle, is a species of Asian box turtle. Taxonomically, it is called Cuora flavomarginata. 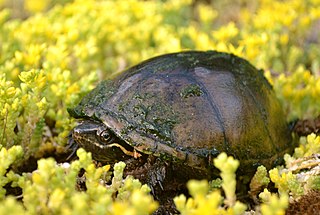 Sternotherus odoratus is a species of small turtle in the family Kinosternidae. The species is native to southeastern Canada and much of the Eastern United States. It is also known commonly as the common musk turtle, eastern musk turtle, or stinkpot due to its ability to release a foul musky odor from scent glands on the edge of its shell, possibly to deter predation. This turtle is grouped in the same family as mud turtles.

Graptemys is a genus of freshwater turtles containing 14 species, commonly known as map turtles. Graptemys are small to medium-sized turtles that are sexually dimorphic, with females attaining as much as twice the length and ten times the mass as males in some species. Depending on the species, adult males range from 7–16 cm (2.75–6.25 in), adult females 10–29.5 cm (4–11.62 in), and hatchlings 2.5–3.8 cm (1–1.5 in), although some sources indicate female Barbour's map turtles grow to 33 cm (13 in) in length. Most species have a distinctive dark pigmented keel that is often notched or serrated running down the center of the carapace and serrated scutes on the rear margin. The head, neck, and limbs exhibit bold patterns of yellow lines and spots against darker green, olive, or black base colors. The patterns on the head can be important characters in identifying the various species. The common name "map turtle" is derived from the intricate patterns on their shells that are suggestive of topographical maps, although the patterns are more apparent in some species than others, and often become obscure in older specimens. Some species are occasionally called "sawbacks", in reference to the serrated keels on their shell. 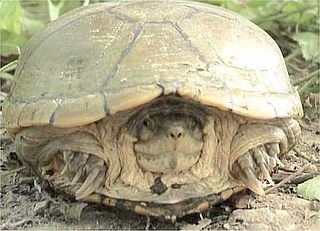 The yellow mud turtle, also commonly known as the yellow-necked mud turtle, is a species of mud turtle in the family Kinosternidae. The species is endemic to the Central United States and Mexico.

The Rio Grande cooter is a species of turtle in the family Emydidae. The species is native to northeastern Mexico and the adjacent southwestern United States. 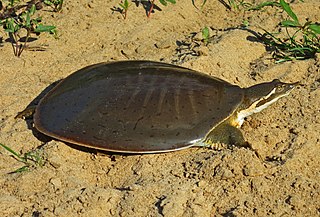 The Mississippi map turtle is a subspecies of land and water turtle belonging to the family Emydidae. G. p. kohni is endemic to the central United States.

The false map turtle is a species of turtle endemic to the United States. It is a common pet species. Two subspecies are recognized, including the nominotypical subspecies described here.

The eastern mud turtle or common mud turtle is a common species of turtle in the family Kinosternidae. The species is endemic to the United States. There are two recognized subspecies.

The southern painted turtle is a species of turtle in the family Emydidae. It is endemic to the south-central United States.