Thrombospondin 1, abbreviated as THBS1, is a protein that in humans is encoded by the THBS1 gene. [5] [6]

Thrombospondin 1 is a subunit of a disulfide-linked homotrimeric protein. This protein is an adhesive glycoprotein that mediates cell-to-cell and cell-to-matrix interactions. This protein can bind to fibrinogen, fibronectin, laminin, collagens types V and VII and integrins alpha-V/beta-1. This protein has been shown to play roles in platelet aggregation, angiogenesis, and tumorigenesis. [7] [8]

The thrombospondin-1 protein is a member of the thrombospondin family. It is a multi-domain matrix glycoprotein that has been shown to be a natural inhibitor of neovascularization and tumorigenesis in healthy tissue. Both positive and negative modulation of endothelial cell adhesion, motility, and growth have been attributed to TSP1. This should not be surprising considering that TSP1 interacts with at least 12 cell adhesion receptors, including CD36, αv integrins, β1 integrins, syndecan, and integrin-associated protein (IAP or CD47). It also interacts with numerous proteases involved in angiogenesis, including plasminogen, urokinase, matrix metalloproteinase, thrombin, cathepsin, and elastase.

The various functions of the TSRs have been attributed to several recognition motifs. Characterization of these motifs has led to the use of recombinant proteins that contain these motifs; these recombinant proteins are deemed useful in cancer therapy. The TSP-1 3TSR (a recombinant version of the THBS1 antiangiogenic domain containing all three thrombosopondin-1 type 1 repeats) can activate transforming growth factor beta 1 (TGFβ1) and inhibit endothelial cell migration, angiogenesis, and tumor growth. [10]

Thrombospondin's activity has been mapped to several domains, in particular the amino-terminal heparin-binding domain, the procollagen domain, the properdin-like type I repeats, and the globular carboxy-terminal domain. The protein also contains type II repeats with epidermal growth factor-like homology and type III repeats that contain an RGD sequence. [11]

Both the procollagen domain and the type I repeats of TSP1 have been shown to inhibit neovascularization and EC migration. However, it is unlikely that the mechanisms of action of these fragments are the same. The type I repeats of TSP1 are capable of inhibiting EC migration in a Boyden chamber assay after a 3-4 hour exposure, whereas a 36- to 48-hour exposure period is necessary for inhibition of EC migration with the procollagen domain. [12] Whereas the chorioallantoic membrane (CAM) assay shows the type I repeats of TSP1 to be antiangiogenic, it also shows that the procollagen sequence lacks anti-angiogenic activity. This may be in part because the animo-terminal end of TSP1 differs more than the carboxy-terminal end across species, but may also suggest different mechanisms of action. [13]

TSP1 contains three type I repeats, only the second two of which have been found to inhibit angiogenesis. The type I repeat motif is more effective than the entire protein at inhibiting angiogenesis and contains not one but two regions of activity. The amino-terminal end contains a tryptophan-rich motif that blocks fibroblast growth factor (FGF-2 or bFGF) driven angiogenesis. This region has also been found to prevent FGF-2 binding ECs, suggesting that its mechanism of action may be to sequester FGF-2. The second region of activity, the CD36 binding region of TSP1, can be found on the carboxy-terminal half of the type I repeats. [13] It has been suggested that activating the CD36 receptor causes an increase in ECs sensitivity to apoptotic signals. [14] [15] Type I repeats have also been shown to bind to heparin, fibronectin, TGF-β, and others, potentially antagonizing the effects of these molecules on ECs. [16] However, CD36 is generally considered to be the dominant inhibitory signaling receptor for TSP1, and EC expression of CD36 is restricted to microvascular ECs.

The carboxy-terminal domain of TSP1 is believed to mediate cellular attachment and has been found to bind to another important receptor for TSP1, IAP (or CD47). [18] This receptor is considered necessary for nitric oxide-stimulated TSP1-mediated vascular cell responses and cGMP signaling. [19] Various domains of and receptors for TSP1 have been shown to have pro-adhesive and chemotactic activities for cancer cells, suggesting that this molecule may have a direct effect on cancer cell biology independent of its anti-angiogenic properties. [20] [21]

One study has suggested that, by blocking TSP1 from binding to its cell surface receptor (CD47) normal tissue confers high resistance to cancer radiation therapy and assists in tumor death. [22]

Thrombospondin 1 has been shown to interact with:

Integrins are transmembrane receptors that facilitate cell-cell and cell-extracellular matrix (ECM) adhesion. Upon ligand binding, integrins activate signal transduction pathways that mediate cellular signals such as regulation of the cell cycle, organization of the intracellular cytoskeleton, and movement of new receptors to the cell membrane. The presence of integrins allows rapid and flexible responses to events at the cell surface. 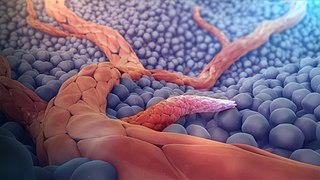 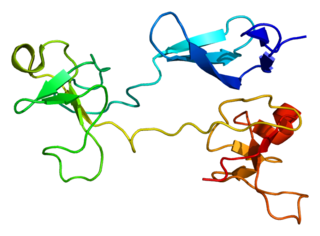 Angiomotin (AMOT) is a protein that in humans is encoded by the AMOT gene. It belongs to the motin family of angiostatin binding proteins, which includes angiomotin, angiomotin-like 1 (AMOTL1) and angiomotin-like 2 (AMOTL2) characterized by coiled-coil domains at N-terminus and consensus PDZ-binding domain at the C-terminus. Angiomotin is expressed predominantly in endothelial cells of capillaries as well as angiogenic tissues such as placenta and solid tumor. 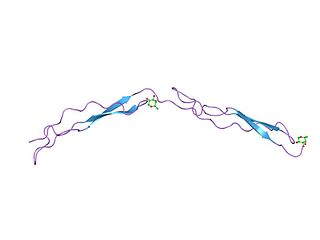 Thrombospondins (TSPs) are a family of secreted glycoproteins with antiangiogenic functions. Due to their dynamic role within the extracellular matrix they are considered matricellular proteins. The first member of the family, thrombospondin 1 (THBS1), was discovered in 1971 by Nancy L. Baenziger. 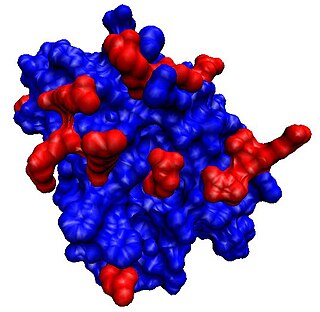 Endostatin is a naturally occurring, 20-kDa C-terminal fragment derived from type XVIII collagen. It is reported to serve as an anti-angiogenic agent, similar to angiostatin and thrombospondin. 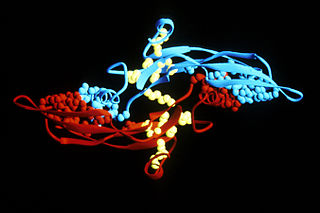 Angiopoietin is part of a family of vascular growth factors that play a role in embryonic and postnatal angiogenesis. Angiopoietin signaling most directly corresponds with angiogenesis, the process by which new arteries and veins form from preexisting blood vessels. Angiogenesis proceeds through sprouting, endothelial cell migration, proliferation, and vessel destabilization and stabilization. They are responsible for assembling and disassembling the endothelial lining of blood vessels. Angiopoietin cytokines are involved with controlling microvascular permeability, vasodilation, and vasoconstriction by signaling smooth muscle cells surrounding vessels. There are now four identified angiopoietins: ANGPT1, ANGPT2, ANGPTL3, ANGPT4.

Endoglin (ENG) is a type I membrane glycoprotein located on cell surfaces and is part of the TGF beta receptor complex. It is also commonly referred to as CD105, END, FLJ41744, HHT1, ORW and ORW1. It has a crucial role in angiogenesis, therefore, making it an important protein for tumor growth, survival and metastasis of cancer cells to other locations in the body.

CTGF, also known as CCN2 or connective tissue growth factor, is a matricellular protein of the CCN family of extracellular matrix-associated heparin-binding proteins. CTGF has important roles in many biological processes, including cell adhesion, migration, proliferation, angiogenesis, skeletal development, and tissue wound repair, and is critically involved in fibrotic disease and several forms of cancers.

Heparin-binding EGF-like growth factor (HB-EGF) is a member of the EGF family of proteins that in humans is encoded by the HBEGF gene.

72 kDa type IV collagenase also known as matrix metalloproteinase-2 (MMP-2) and gelatinase A is an enzyme that in humans is encoded by the MMP2 gene. The MMP2 gene is located on chromosome 16 at position 12.2.

Cysteine-rich angiogenic inducer 61 (CYR61) or CCN family member 1 (CCN1), is a matricellular protein that in humans is encoded by the CYR61 gene. 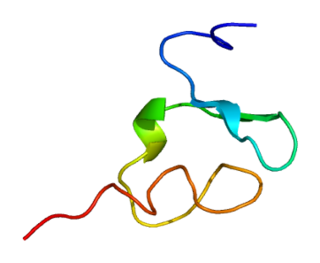 Low density lipoprotein receptor-related protein 1 (LRP1), also known as alpha-2-macroglobulin receptor (A2MR), apolipoprotein E receptor (APOER) or cluster of differentiation 91 (CD91), is a protein forming a receptor found in the plasma membrane of cells involved in receptor-mediated endocytosis. In humans, the LRP1 protein is encoded by the LRP1 gene. LRP1 is also a key signalling protein and, thus, involved in various biological processes, such as lipoprotein metabolism and cell motility, and diseases, such as neurodegenerative diseases, atherosclerosis, and cancer.

Brain-specific angiogenesis inhibitor 1 is a protein that in humans is encoded by the BAI1 gene. It is a member of the adhesion-GPCR family of receptors. 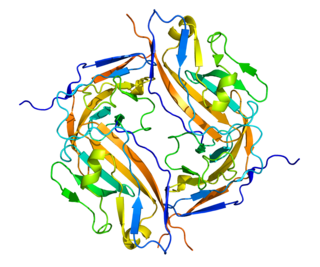 CD47 also known as integrin associated protein (IAP) is a transmembrane protein that in humans is encoded by the CD47 gene. CD47 belongs to the immunoglobulin superfamily and partners with membrane integrins and also binds the ligands thrombospondin-1 (TSP-1) and signal-regulatory protein alpha (SIRPα). CD-47 acts as a don't eat me signal to macrophages of the immune system which has made it a potential therapeutic target in some cancers, and more recently, for the treatment of pulmonary fibrosis.

NOV also known as CCN3 is a matricellular protein that in humans is encoded by the NOV gene.

Angiogenesis is the process of forming new blood vessels from existing blood vessels. It is a highly complex process involving extensive interplay between cells, soluble factors, and the extracellular matrix (ECM). Angiogenesis is critical during normal physiological development, but it also occurs in adults during inflammation, wound healing, ischemia, and in pathological conditions such as rheumatoid arthritis, hemangioma, and tumor growth. Proteolysis has been indicated as one of the first and most sustained activities involved in the formation of new blood vessels. Numerous proteases including matrix metalloproteases (MMPs), a disintegrin and metalloprotease domain (ADAM), a disintegrin and metalloprotease domain with throbospondin motifs (ADAMTS), and cysteine and serine proteases are involved in angiogenesis. This article focuses on the important and diverse roles that these proteases play in the regulation of angiogenesis.