Thylacinus megiriani was a quadrupedal marsupial predator, that in appearance looked similar to a dog with a long snout. Its molar teeth were specialized for carnivory, the cups and crest were reduced or elongated to give the molars a cutting blade, and in proportion with its body, its teeth were exceptionally large, possibly adding to its body weight. Its estimated weight is over 57 kg.

Thylacinus megiriani, along with crocodiles and giant monitor lizards, were thought to be the only predators in Alcoota.

Thylacinus megiriani fossils, along with those of T. potens , have been discovered in Alcoota in the Northern Territory, although the remains of Thylacinus in Alcoota are very rare. Paleontologist have found specimens densely packed together that died within a matter of years of one another. Drought and unpredictable weather likely were the cause.

The description of the species was published in a 1997 study by Peter F. Murray. The holotype was obtained at the Alcoota fossil area by the geologist Dirk Megirian, whose work in carefully excavating the specimen was honoured by the author in the specific epithet megiriani. [1]

A species of Thylacinus , it was somewhat larger than the recent Tasmanian tiger Thylacinus cynocephalus , and similar weight to another late Miocene species Thylacinus potens , both of which are estimated to have been in a range of 38.7 and 57.3 kilograms. [2] The type material was exceptionally fragmented in its sandstone deposition at Alcoota, requiring the assembly of the dentary for examination and comparison. The first reconstruction of the specimen was modified by the describing author. Murray's reconstruction is of one larger and more robust dentition and palate than T. cynocephalus, but resembling the gracile and elongated snout, more so than the species T. potens. [1] 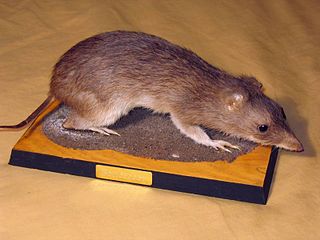 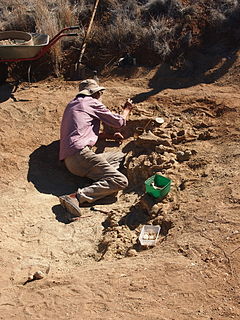 The Alcoota Fossil Beds are an important paleontological site in the Northern Territory of Australia located on Alcoota Station in the locality of Anmatjere about 115 kilometres (71 mi) north-east of Alice Springs in the Central Australia region. It is notable for the occurrence of well-preserved, rare, Miocene vertebrate fossils, which provide evidence of the evolution of the Northern Territory’s fauna and climate. The Alcoota Fossil Beds are also significant as a research and teaching site for palaeontology students. 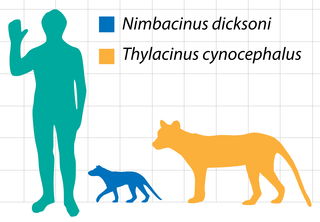 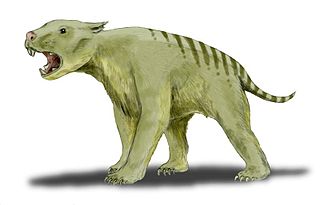 Muribacinus gadiyuli lived during the middle Miocene in Riversleigh. The species name comes from Wanyi aboriginal word for "little", in reference to its considerably small size compared to the modern thylacine and was similar in size to a fox-terrier dog, and "father" for the ancestral characteristics of the fossilised teeth.

Nimbacinus richi lived during the middle Miocene and has been found in deposits in Bullock Creek in the Northern Territory of Australia.

Tyarrpecinus rothi is an extinct thylacinid marsupial that lived during the late Miocene and has been found at the Alcoota scientific reserve in the Northern Territory. The specific name honors Karl Roth for his contributions to the natural history of central Australia. 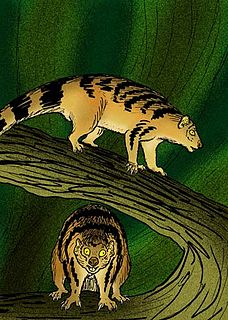 Microleo attenboroughi is a very small species of the Thylacoleonidae family from the Early Miocene of Australia, living in the wet forest that dominated Riversleigh about 18 million years ago. The genus Microleo is currently known from a broken palate and two pieces of jaw, containing some teeth and roots that correspond to those found in other species of thylacoleonids. The shape and structure of the blade-like P3 tooth, a premolar, distinguished the species as a new genus. It was found in Early Miocene-aged deposits of the Riversleigh fossil site in Queensland, regarded as one of the most significant palaeontological sites yet discovered, and named for the naturalist David Attenborough in appreciation of his support for its heritage listing. The anatomy of Microleo suggests the genus is basal to all the known thylacoleonids, known as the marsupial lions, although its relative size prompted a discover to describe it as the "feisty" kitten of the family.

Propalorchestes is a fossil genus of Diprotodontidae, mammals that existed in Australia.

Ian Archibald is an Australian taxidermist responsible for the preparation of animal specimens exhibited in Australian museums.