Thymalus limbatus is a species of beetle in family Trogossitidae. It is found in the palearctic. [2] It is an obligate Saproxylic species associated with Betula pendula , Fagus sylvatica , Fagus sylvatica , Tilia × europaea and Picea abies mostly under bark. It feeds on fungus or dead wood.

Trogossitidae is a small family of bark-gnawing beetles in the suborder Polyphaga. Trogossitidae consists of about 600 species. 59 species are found in America and about 36 in Australia.

Xylophagy is a term used in ecology to describe the habits of an herbivorous animal whose diet consists primarily of wood. The word derives from Greek ξυλοφάγος (xulophagos) "eating wood", from ξύλον "wood" and φαγεῖν "to eat", an ancient Greek name for a kind of a worm-eating bird. Animals feeding only on dead wood are called sapro-xylophagous or saproxylic. 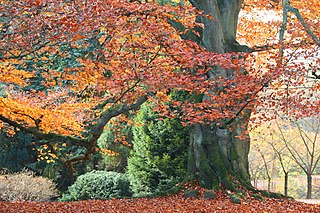 Beech (Fagus) is a genus of deciduous trees in the family Fagaceae, native to temperate Europe, Asia, and North America. 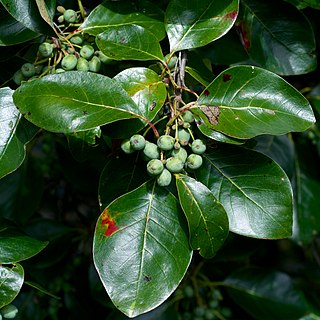 Fagus sylvatica, the European beech or common beech, is a deciduous tree belonging to the beech family Fagaceae.

Fagus orientalis, commonly known as the Oriental beech, is a deciduous tree in the beech family Fagaceae. It is native to Eurasia, in Eastern Europe and Western Asia.

The New Canaan Nature Center is a botanical garden, arboretum and nature preserve located at 144 Oenoke Ridge, Route 124, about .25 miles (0.40 km) north of the center of New Canaan, Connecticut.

King's Wood and Urchin Wood SSSI is a 128.1 hectare biological Site of Special Scientific Interest near the villages of Cleeve and Congresbury, North Somerset, notified in 1990.

Copper beech may refer to:

Dorcus parallelipipedus, the lesser stag beetle, is a species of stag beetle found in Europe.

Phytophthora cambivora is a plant pathogen that causes ink disease in European chestnut trees. Ink disease, also caused by Phytophthora cinnamomi, is thought to have been present in Europe since the 18th century, and causes chestnut trees to wilt and die; major epidemics occurred during the 19th and 20th centuries. P. cinnamomi and P. cambivora are now present throughout Europe since the 1990s. Ink disease has resurged, often causing high mortality of trees, particularly in Portugal, Italy, and France. It has also been isolated from a number of different species since the 1990s, including:

Stigmella hemargyrella is a moth of the Nepticulidae family. It is found in most of Europe, except Iceland, Norway, Finland, Portugal and most of the Baltic region.

Fagivorina arenaria, the speckled beauty, is a species of moth of the family Geometridae. The species was first described by Johann Siegfried Hufnagel in 1767. It is found from most of central Europe to the Balkan Peninsula and Ukraine. In the south it is found up to Sicily and in the north to Sweden and Norway.

Parornix fagivora is a moth of the family Gracillariidae. It is found from Sweden to the Pyrenees, Italy and Albania and from Great Britain to southern Russia. 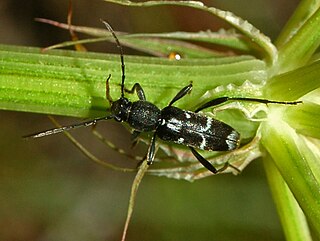 Rutpela maculata, the spotted longhorn, is a beetle species of flower longhorns of the family Cerambycidae, subfamily Lepturinae.

Fagus × taurica, the Crimean beech, is a deciduous tree in the beech genus Fagus. The Balkan beechFagus moesiaca is considered to be the same species. It has been thought to be a hybrid between F. orientalis and F. sylvatica, but the relationships between Eurasian beeches are still unclear, and it may show greater affinity with F. orientalis. 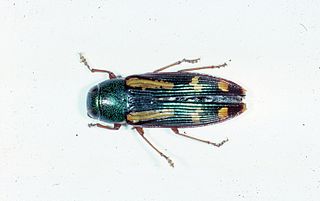 Buprestis rufipes is a green metallic wood boring beetle native to southern and eastern United States in North America. Little is known about this beetle. It apparently inhabits dead or dying hardwood in its adult phase.

Mesosa curculionoides is a species of beetle in the family Cerambycidae, and the type species of its genus. It was described by Carl Linnaeus in 1761, originally under the genus Cerambyx. It has a wide distribution throughout Europe and in the Caucasus, and is also known from South Korea. It was formerly found in Belgium, where it is now extinct. It measures between 10 to 17 mm. 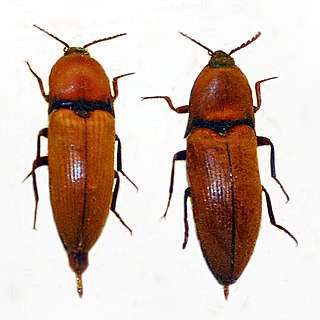 Elater ferrugineus, the rusty click beetle, is a species of click beetle belonging to the family Elateridae.