Thyrea is a genus of lichenized fungi within the family Lichinaceae. [1] The genus contains about 23 species. [2] 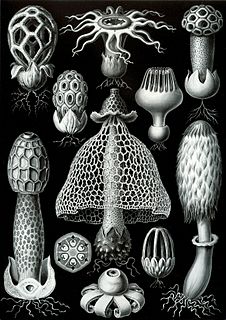 Basidiomycota is one of two large divisions that, together with the Ascomycota, constitute the subkingdom Dikarya within the kingdom Fungi. More specifically, Basidiomycota includes these groups: mushrooms, puffballs, stinkhorns, bracket fungi, other polypores, jelly fungi, boletes, chanterelles, earth stars, smuts, bunts, rusts, mirror yeasts, and the human pathogenic yeast Cryptococcus. Basidiomycota are filamentous fungi composed of hyphae and reproduce sexually via the formation of specialized club-shaped end cells called basidia that normally bear external meiospores. These specialized spores are called basidiospores. However, some Basidiomycota are obligate asexual reproducers. Basidiomycota that reproduce asexually can typically be recognized as members of this division by gross similarity to others, by the formation of a distinctive anatomical feature, cell wall components, and definitively by phylogenetic molecular analysis of DNA sequence data.

A truffle is the fruiting body of a subterranean ascomycete fungus, predominantly one of the many species of the genus Tuber. In addition to Tuber, many other genera of fungi are classified as truffles including Geopora, Peziza, Choiromyces, Leucangium, and over a hundred others. These genera belong to the class Pezizomycetes and the Pezizales order. Several truffle-like basidiomycetes are excluded from Pezizales, including Rhizopogon and Glomus. Truffles are ectomycorrhizal fungi, so are usually found in close association with tree roots. Spore dispersal is accomplished through fungivores, animals that eat fungi. These fungi have significant ecological roles in nutrient cycling and drought tolerance.

The fungal order Agaricales, also known as gilled mushrooms or euagarics, contains some of the most familiar types of mushrooms. The order has 33 extant families, 413 genera, and over 13,000 described species, along with six extinct genera known only from the fossil record. They range from the ubiquitous common mushroom to the deadly destroying angel and the hallucinogenic fly agaric to the bioluminescent jack-o-lantern mushroom.

The Boletales are an order of Agaricomycetes containing over 1300 species with a diverse array of fruiting body types. The boletes are the best known members of this group, and until recently, the Boletales were thought to only contain boletes. The Boletales are now known to contain distinct groups of agarics, gasteromycetes, and other fruiting-body types.

The Boletaceae are a family of mushroom-forming fungi, primarily characterised by small pores on the spore-bearing hymenial surface, instead of gills as are found in most agarics. Nearly as widely distributed as the agarics, the family is renowned for hosting some prime edible species, such as the Cep or King Bolete , highly sought after by mushroom hunters worldwide. A number of rare or threatened species are also present in the family, that have become the focus of increasing conservation concerns. As a whole, the typical members of the family are commonly known as boletes.

The Clavulinaceae are a family of fungi in the order Cantharellales. The family is not well defined, but currently comprises species of clavarioid fungi as well as some corticioid fungi. These species are nutritionally diverse, some being ectomycorrhizal, others wood-rotting saprotrophs, others lichenized, and yet others lichenicolous. 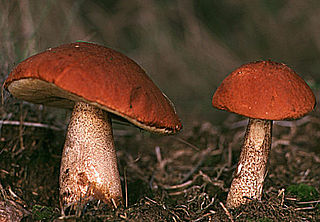 Leccinum is a genus of fungi in the family Boletaceae. It was the name given first to a series of fungi within the genus Boletus, then erected as a new genus last century. Their main distinguishing feature is the small, rigid projections (scabers) that give a rough texture to their stalks. The genus name was coined from the Italian Leccino, for a type of rough-stemmed bolete. The genus has a widespread distribution, especially in north temperate regions, and contains about 75 species. 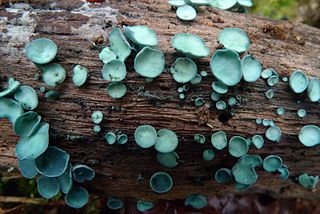 Helotiales is an order of the class Leotiomycetes within the division Ascomycota. According to a 2008 estimate, the order contains 10 families, 501 genera, and 3881 species. 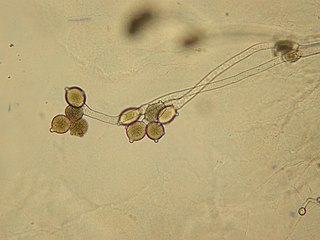 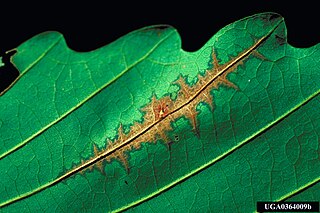 Diaporthales is an order of sac fungi.

Thyrea, also Thyraea, Thyreae or Thyreai (Θυρέαι), was a town of Cynuria, and was fought over between ancient Argolis and ancient Laconia. Its territory was called the Thyreatis (Θνρεᾶτις). According to Pausanias, Thyrea was named after a mythological figure: Thyraeos, the son of Lycaon. 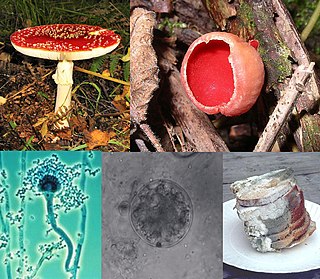 A fungus is any member of the group of eukaryotic organisms that includes microorganisms such as yeasts and molds, as well as the more familiar mushrooms. These organisms are classified as a kingdom, which is separate from the other eukaryotic life kingdoms of plants and animals.

Sclerotinia is a genus of fungi in the family Sclerotiniaceae. The widely distributed genus contains 14 species.

Monilinia is a genus of fungi in the family Sclerotiniaceae.

Thyrea may refer to:

Cynuria is an ancient district on the eastern coast of the Peloponnese, between the Argolis and Laconia, so called from the Cynurians, one of the most ancient tribes in the peninsula. It was believed to have taken its name from the mythical Cynurus.