Tibicen is an historical genus name in the insect family Cicadidae (order Hemiptera) that was originally published by P. A. Latreille in 1825 [1] and formally made available in a translation by A. A. Berthold in 1827. [2] The name was placed on the Official Index of Rejected and Invalid Generic Names in Zoology by the International Commission on Zoological Nomenclature in 2021. [3] Certain European cicada species that were included by some authors in this genus at the time of its suppression are now listed under genus Lyristes Horváth, 1926. [4] Many other formerly-Tibicen species are found in the genera Auritibicen Lee, 2015, Hadoa Moulds, 2015 Megatibicen Sanborn and Heath, 2016, and Neotibicen Hill and Moulds, 2015.

For nearly a century after its 1825 appearance in the literature, Tibicen was rarely referenced. [5] Usage increased in the early 1900s when influential authors such as G. W. Kirkaldy, E. P. Van Duzee, and W. T. Davis began applying the name to a group of prominent North American cicadas currently in the subfamily Cicadinae and tribe Cryptotympanini. By 2015, more than 100 cicada species and subspecies were included in genus Tibicen, from around the Northern Hemisphere. [6]

During the 20th century, Tibicen became a source of controvery and confusion in cicada nomenclature. [7] [8] [9] Some argued that neither Latreille's original description nor its Berthold translation met the requirements of the International Code of Zoological Nomenclature. Both works listed the new genus name with no description, immediately followed by the species "c. plebeia" or "Cicada plebeia", without authorship. This indication has often been taken to refer to Cicada plebeja Scopoli, 1763 [6] [5] (a European species now in subfamily Cicadinae), although a different Cicada plebeja might have been intended, a Cicadinae species defined by Linnaeus in 1767. Acceptance of the argument that neither Latreille's nor Berthold's publication made the name available to nomenclature would lead to the conclusion that Tibicen was correctly founded on a later publication of the name, one also authored by Latreille (1829) [10] but based on a different Scopoli species, Cicada haematodes Scopoli, 1763 (a cicada now in subfamily Tibicininae). Disagreement over the nomenclatural validity of Tibicen Berthold, 1827 (or Latreille, 1825) versus Tibicen Latreille, 1829 meant that the genus name as well as the family group names based upon it (e.g., Tibiceninae) held different biological meanings depending on the author's opinion of the correct type species. Furthermore, since the stem of the name Tibicen differs by just one letter from that of the cicada genus Tibicina Kolenati, 1857, for which Cicada haematodes Scopoli was also assigned type status, additional confusion was created by different authors misspelling the involved generic and family group names.

In 1984, Melville and Sims petitioned the International Commission on Zoological Nomenclature to alleviate the longstanding confusion within cicada taxonomy by suppressing the generic name Tibicen Berthold, 1827 for the purposes of the Principle of Priority (Case 239). [11] This change would eliminate the problem of higher level taxa with similar spellings and allow the cicadas allied with Cicada plebeja Scopoli, 1763 at the genus level to be included under an unambiguously defined junior name, Lyristes Horváth, a synonym which had been created in 1926. [12]

Several decades passed before the Commission responded to the Melville and Sims petition. In 2014, several authors renewed the push to resolve the Tibicen question, albeit with differing opinions as to the validity of the original 1825/1827 definition of the name. [13] Finally, in 2021, the Commission issued Opinion 2475 which suppressed the generic name Tibicen Berthold, 1827 for the purposes of the Principle of Priority and placed it on the Official Index of Rejected and Invalid Generic Names in Zoology. [3] This decision was facilitated by the prior removal to new genera of all formerly Tibicen species from Asia and the Americas, prompted in part by new molecular genetic data. [14] [15] [16] [17] Because related cicadas in the European species group were already included under Lyristes by many authors, suppression of the name Tibicen also conserved current usage. [18] [19]

As an officially rejected name, Tibicen is now an item of history. All species associated at the generic level with its type species are currently listed under genus Lyristes Horváth, 1926. [4] The family group names based on Tibicen – namely Tibicenina (subtribe), Tibicenini (tribe), Tibiceninae (subfamily), Tibicenidae (family), and Tibicenoidea (superfamily) – are also no longer available for use (Article 39, Code of Zoological Nomenclature). [20] Tibicenini, which was named by Distant (1889), previously held date priority as the oldest name for the current tribal concept that includes Cicada plebeja Scopoli. This group is now commonly referred to with the name Cryptotympanini Handlirsch, 1925. [21] 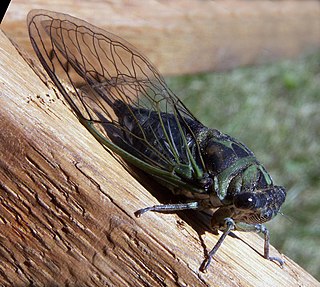 Cicadas of the genus Neotibicen are large-bodied insects of the family Cicadidae that appear in summer or early fall in eastern North America. Common names include cicada, harvestfly, jar fly, and the misnomer locust. In 2015, these species were moved from the genus Tibicen, which was redefined in the twenty-first century to include only a few European species, while species from the Western United States and Mexico are now placed in a separate genus, Hadoa. In addition, several former Neotibicen species have been moved to the genus Megatibicen.

The Cicadinae are a subfamily of cicadas, containing the translucent cicadas. They are robust cicadas and many have gaudy colors, but they generally lack the butterfly-like opaque wing markings found in many species of the related Tibiceninae.

Tibiceninae is a historical subfamily name from the insect family Cicadidae. It was first used by Distant (1889). As of 2021, the name became unavailable to zoological nomenclature due to the suppression of its type genus Tibicen Berthold, 1827 by the International Commission on Zoological Nomenclature. Cicada genera grouped at the subfamily level with genus Lyristes are generally referenced under the name Cicadinae Latreille, 1802. 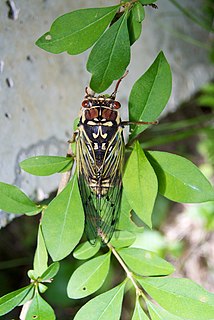 Cryptotympanini is a tribe of cicadas in the family Cicadidae. They are found in the Nearctic, Palearctic, Indomalaya, Oceania, and Afrotropics.

Tibicenini is a historical tribe name from the insect family Cicadidae, based on the family group taxon established by Distant (1889). As of 2021, the name became unavailable to zoological nomenclature due to the suppression of its type genus Tibicen Berthold, 1827 by the International Commission on Zoological Nomenclature. Cicada genera grouped at the tribe level with genus Lyristes are generally referenced under the name Cryptotympanini Handlirsch, 1925. 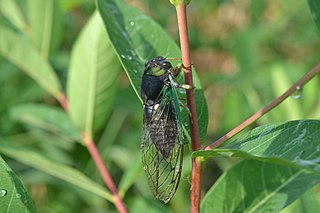 Neotibicen tibicen, known generally as the swamp cicada or morning cicada, is a species of cicada in the family Cicadidae. It is widespread across much of the eastern and central United States and portions of southeastern Canada. There are two subspecies, N. tibicen tibicen and N. tibicen australis, with the latter replacing subspecies tibicen in portions of Florida, Georgia, and Alabama. 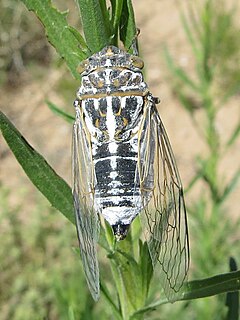 The genus Hadoa comprises large-bodied Cicadidae occurring in Western North America. Until recently, these species were in the genus Tibicen, which has now been redefined so as to include only a few European species, while most species from the Eastern and Central US are now placed in Neotibicen and Megatibicen.

Megatibicen is a genus of cicadas in the family Cicadidae, with about 10 described species. Until 2016, these species were included in the genus Tibicen and then briefly in Neotibicen. The species formerly of genera Ameritibicen Lee, 2016 and Gigatibicen Lee, 2016 are now considered species of Megatibicen Sanborn & Heath, 2016.

Neotibicen superbus, the superb dog-day cicada, is a species of cicada in the family Cicadidae. It is the greenest cicada in the neotibicen genus. It has reduced black patterning and looks different than most other cicadas in its genus. Its song is a soft buzz that reaches a crescendo. 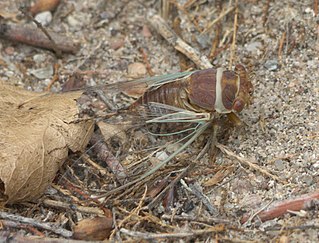 Diceroprocta is a genus of scrub cicadas in the family Cicadidae. There are at least 60 described species in Diceroprocta.

Diceroprocta azteca is a species of cicada in the family Cicadidae. It is found in Central America, North America, and South America.

Diceroprocta averyi is a species of cicada in the family Cicadidae. It is found in North America.

Diceroprocta aurantiaca is a species of cicada in the family Cicadidae. It is found in North America.

Cornuplura is a genus of cicadas in the family Cicadidae. There are at least three described species in Cornuplura.

Beameria is a genus of cicadas in the family Cicadidae. There are at least three described species in Beameria.

Diceroprocta texana is a species of cicada in the family Cicadidae. It is found in Central America and North America.

Diceroprocta marevagans is a species of cicada in the family Cicadidae. It is found in Central America and North America.

Cacama collinaplaga is a species of cicada in the family Cicadidae. It is found in North America.

Megatibicen resh, the resh cicada or western dusk singing cicada, is a species of cicada in the family Cicadidae, found in North America. 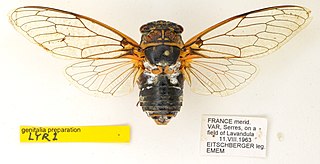 Lyristes is a genus of cicadas from Europe and the Middle East. It was described by G. Horvath in 1926.