Tibouchina heteromalla, known by the common name silverleafed princess flower [4] in English is a species of evergreen flowering plant in the genus Tibouchina of the family Melastomataceae. It is native to Brazil. [5]

Tibouchina heteromalla reaches an average height of 4–6 feet (1.2–1.8 m), with a maximum of about 8–10 feet (2.4–3.0 m) in its native habitat. The branching stem is woody and the large, silvery green leaves are simple, ovate, velvety in texture, and oppositely arranged. The inflorescence is a panicle of several purple flowers with five petals. The plant has 4–6 inches (10–15 cm) long leaves, with prominent veins that are puffed up in the middle and old leaves will often turn a beautiful orange color just prior to dropping off. [6]

The plant is cultivated as an ornamental for its showy foliage and purple flowers. It is sensitive to cold but can tolerate a light frost.

Rosa multiflora is a species of rose known commonly as multiflora rose, baby rose, Japanese rose, many-flowered rose, seven-sisters rose, Eijitsu rose and rambler rose. It is native to eastern Asia, in China, Japan and Korea. It should not be confused with Rosa rugosa, which is also known as "Japanese rose", or with polyantha roses which are garden cultivars derived from hybrids of R. multiflora. 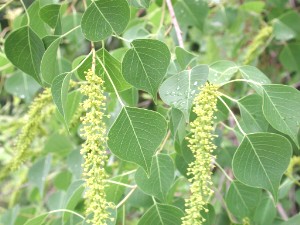 Triadica sebifera, the Chinese tallow, Chinese tallowtree, Florida aspen, chicken tree, gray popcorn tree, or candleberry tree, is a tree native to eastern Asia. It is native to eastern China, and Taiwan, and introduced to Japan in Edo period. The waxy coating of the seeds is used for candle and soap making, and the leaves are used as herbal medicine to treat boils. The plant sap and leaves are reputed to be toxic, and decaying leaves from the plant are toxic to other species of plants. The specific epithets sebifera and sebiferum mean "wax-bearing" and refer to the tallow that coats the seeds.

Tibouchina Aubl. is a Neotropical flowering plant genus in Melastomataceae Juss. that contains approximately 240 species. Species of this genus are herbs, shrubs or trees and typically have purple flowers. They are native to Mexico, the Caribbean, and South America where they are found as far south as northern Argentina. Members of this genus are known as glory bushes, glory trees or princess flowers. The name Tibouchina is adapted from a Guianan indigenous name for a member of this genus [2]. A recent systematic study has shown that this genus is paraphyletic.

Dictamnus is a genus of flowering plant in the family Rutaceae, with a single species, Dictamnus albus, which has several geographical variants. It is also known as burning bush, dittany, gas plant, and fraxinella. It is a herbaceous perennial, native to warm, open woodland habitats in southern Europe, north Africa and much of Asia.

Chilopsis is a monotypic genus of flowering plants containing the single species Chilopsis linearis. It is known commonly as desert willow or desert-willow because of its willow-like leaves, but it is not a true willow – being instead a member of the catalpa family.

Nandina domestica commonly known as nandina, heavenly bamboo or sacred bamboo, is a species of flowering plant in the family Berberidaceae, native to eastern Asia from the Himalayas to Japan. It is the only member of the monotypic genus Nandina. It is widely grown in gardens as an ornamental plant since it has a number of cultivars that display bright-red fall foliage in the cool months with attractive new foliage growth in spring.

Rubus cockburnianus, the white-stemmed bramble, is a species of flowering plant in the family Rosaceae. It is endemic to China. 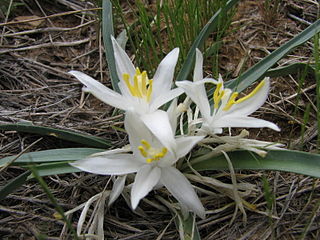 Leucocrinum montanum, commonly known as the sand lily, common starlily or mountain lily, is the only species in the monotypic genus Leucocrinum, placed in the family Asparagaceae, and subfamily Agavoideae. It is native to the western United States, primarily in the Rocky Mountains and the Great Basin. 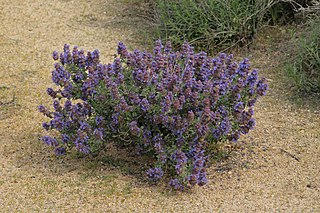 Salvia dorrii, the purple sage, Dorr's sage, fleshy sage, mint sage, or tobacco sage, is a perennial spreading shrub in the family Lamiaceae. It is native to mountain areas in the western United States and northwestern Arizona, found mainly in the Great Basin and southward to the Mojave Desert, growing in dry, well draining soils. 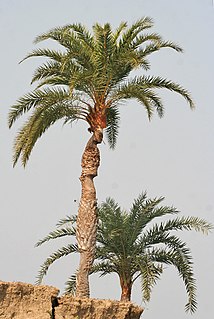 Phoenix sylvestris also known as silver date palm, Indian date, sugar date palm or wild date palm, is a species of flowering plant in the palm family native to southern Pakistan, most of India, Sri Lanka, Nepal, Bhutan, Burma and Bangladesh. It is also reportedly naturalized in Mauritius, the Chagos Archipelago, Puerto Rico and the Leeward Islands. Growing in plains and scrubland up to 1300 m above sea level, the fruit from this palm species is used to make wine and jelly. The sap is tapped and drunk fresh or fermented into toddy. The fresh sap is boiled to make palm jaggery in West Bengal state of India and Bangladesh. 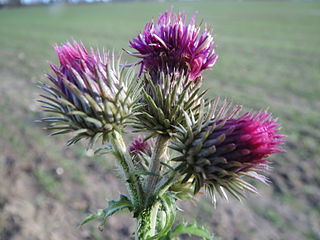 Carduus acanthoides, known as the spiny plumeless thistle, welted thistle, or plumeless thistle, is a biennial plant species of thistle in the sunflower family (Asteraceae). The plant is native to Europe and Asia and introduced in many other areas, where it is sometimes considered an invasive species.

Sambucus racemosa is a species of elderberry known by the common names red elderberry and red-berried elder.

Salvia longispicata is a perennial shrub native to southwestern Mexico, growing between 1,000 and 6,500 feet elevation. The specific epithet "longispicata" gives the impression that the plant has "long spikes", but instead refers to the many projecting clusters of short flowering spikes that resemble small ears of corn. 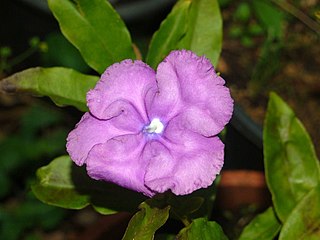 Brunfelsia grandiflora is a flowering shrub in the nightshade family. It is native to South America. In English is known by the common names royal purple brunfelsia, kiss-me-quick, and yesterday-today-and-tomorrow. In Peru it is known by the Spanish-Quechua name chiricsanango. 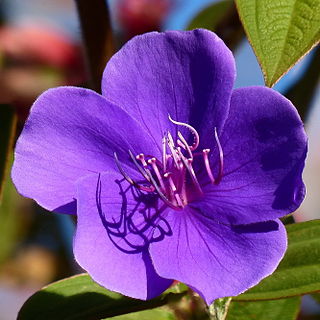 Tibouchina urvilleana is a species of flowering plant in the family Melastomataceae, native to Brazil. Growing to 3–6 m (10–20 ft) tall by 2–3 m (7–10 ft) wide, it is a sprawling evergreen shrub with longitudinally veined, dark green hairy leaves. Clusters of brilliant purple flowers up to 10 cm (4 in) in diameter, with black stamens, are borne throughout summer and autumn.

Bougainvillea spectabilis, also known as great bougainvillea, is a species of flowering plant. It is native to Brazil, Bolivia, Peru, and Argentina's Chubut Province. 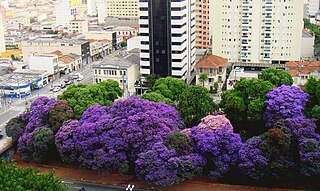