Tickell's blue flycatcher (Cyornis tickelliae) is a small passerine bird in the flycatcher family. This is an insectivorous species which breeds in tropical Asia, from the Indian Subcontinent eastwards to Bangladesh and western Myanmar. The Indochinese blue flycatcher was formerly considered conspecific. They are blue on the upperparts and the throat and breast are rufous. They are found in dense scrub to forest habitats.

The name commemorates the wife of the British ornithologist Samuel Tickell who collected in India and Burma. [2]

Tickell's blue flycatcher is about 11–12 cm long. It sits upright and forages mainly in the overgrowth. The male's upper parts are bright blue, its throat and breast are red, and the rest of the underparts are white. The female is duller blue with a brighter blue brow, shoulder, rump, and tail. It hybridizes with the pale-chinned blue flycatcher (Cyornis poliogenys) in the Eastern Ghats of India and these hybrids have sometimes been called the subspecies vernayi. The juvenile is streaked and has a spotted mantle, scaly brown upperparts, head and breast, with just the wings and tail being blue. [3]

They have sometimes been known to feed even after dusk. [4] Apart from flying insects they have been noted to occasionally glean crawling insects. [5]

The species shows regional variations in plumage and size and several of these populations have been designated with subspecies names. The nominate form is found in India, Nepal and Myanmar. The Sri Lankan population is separated as jerdoni (or nesea/mesaea said to be darker [6] ) [7] [8]

In the past this species has been considered as a subspecies of the blue-throated blue flycatcher (Cyornis rubeculoides) which resembles this but has a blue throat. [9]

The metallic song of the bird includes a series of clicks followed by five or six notes that end abruptly. [6] The metallic song consists of short clicks followed by five or six notes resembling that of the Spot-breasted fantail. Alarm calls include churr and clicking notes. [3] It is a wary bird and is easily observed in small gardens too. It is a forest-loving species which is found in thick cover and shade, and particularly haunts the banks of wooded streams.

They feed mainly by capturing insects in flight but their prey include other insects such as termites and earwigs that may be gleaned or picked from the ground. Now they are being observed inhabiting garbage places. [10] During the breeding season, they may take larger prey including small vertebrates. A bush frog has been reported as prey in Sri Lanka. [11] 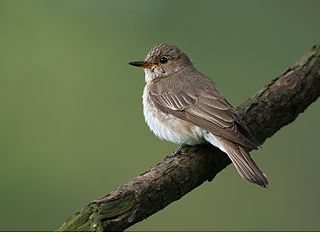 The spotted flycatcher is a small passerine bird in the Old World flycatcher family. It breeds in most of Europe and in the Palearctic to Siberia, and is migratory, wintering in Africa and south western Asia. It is declining in parts of its range. 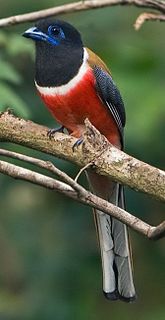 The Malabar trogon is a species of bird in the trogon family. It is found in the forests of Sri Lanka and peninsular India. In India it is mainly found in the Western Ghats, hill forests of central India and in parts of the Eastern Ghats. They are insectivorous and although not migratory, may move seasonally in response to rain in hill forest regions. Like in other trogons, males and females vary in plumage. The birds utter low guttural calls that can be heard only at close quarters and the birds perch still on a branch under the forest canopy, often facing away from the viewer making them easy to miss despite their colourful plumage.

The Indian white-eye, formerly the Oriental white-eye, is a small passerine bird in the white-eye family. It is a resident breeder in open woodland on the Indian subcontinent. They forage in small groups, feeding on nectar and small insects. They are easily identified by the distinctive white eye-ring and overall yellowish upperparts. The range previously extended eastwards to Southeast Asia, Indonesia and Malaysia but when the taxa in these regions were assigned to other species, the English name was changed.

The grey-breasted prinia or Franklin's prinia is a wren-warbler belonging to the family of small passerine birds found mainly in warmer southern regions of the Old World. This prinia is a resident breeder in the Indian subcontinent, Sri Lanka and southeast Asia. Like other prinias, it often holds the tail upright but it is easily told by a smoky grey band across the breast which contrasts with a white throat. The beak is all black while the legs are pink. The tail is graduated as in other prinias and the grey feathers are tipped in white. In the breeding plumage the upperparts are grey while non-breeding birds are pale above with rufous wings and a weak supercilium. It is found in scrub, forest clearings and other open but well vegetated habitats. It can be confused with the rufescent prinia.

The crested treeswift is a kind of tree swift. It was for some time considered the same species as its eastern relative, the grey-rumped treeswift, but they do not interbreed where their ranges overlap. It is distinct in flight, with long, bowed wings and a deeply forked tail that usually appears narrow and pointed.

The Indian nightjar is a small nightjar which is a resident breeder in open lands across South Asia and Southeast Asia. Like most nightjars it is crepuscular and is best detected from its characteristic calls at dawn and dusk that have been likened to a stone skipping on a frozen lake - a series of clicks that become shorter and more rapid. They are sometimes spotted on roads when their eyes gleam red in the spotlight of a vehicle. There is considerable plumage variation across its range and can be hard to differentiate from other nightjars in the region especially in the field. 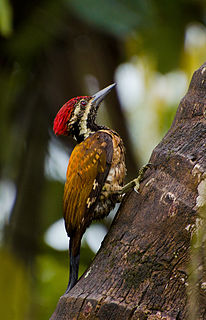 The Kashmir flycatcher is a small passerine bird in the flycatcher family Muscicapidae. At one time it was considered to be a subspecies of the red-breasted flycatcher, Ficedula parva.

The white-bellied blue flycatcher is a small passerine bird in the flycatcher family Muscicapidae. It is endemic to the Western Ghats of southwest India. Males are dark blue with a lighter shade of blue on the brow and have a greyish white belly. Females have a rufous breast, a white face and olive grey above. 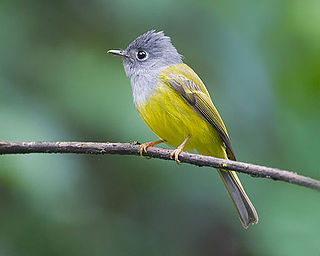 The grey-headed canary-flycatcher, sometimes known as the grey-headed flycatcher, is a species of small flycatcher-like bird found in tropical Asia. It has a square crest, a grey hood and yellow underparts. They are found mainly in forested habitats where they often join other birds in mixed-species foraging flocks. Pairs are often seen as they forage for insects by making flycatcher-like sallies and calling aloud. Several subspecies are recognized within their wide distribution range. In the past the genus Culicicapa was considered to be an Old World flycatcher but studies have found them to belong to a new family designated as the Stenostiridae or fairy flycatchers that include the African genera Stenostira and Elminia. 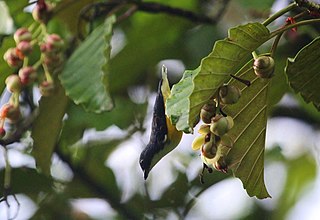 Legge's flowerpecker or the white-throated flowerpecker , is a small passerine bird. It is an endemic resident breeder in Sri Lanka. It is named after the Australian ornithologist William Vincent Legge.

The bar-winged flycatcher-shrike is a small passerine bird usually placed in the Vangidae. It is found in the forests of tropical southern Asia from the Himalayas and hills of southern India to Indonesia. Mainly insectivorous it is found hunting in the mid-canopy of forests, often joining mixed-species foraging flocks. They perch upright and have a distinctive pattern of black and white, males being more shiny black than the females. In some populations the colour of the back is brownish while others have a dark wash on the underside. 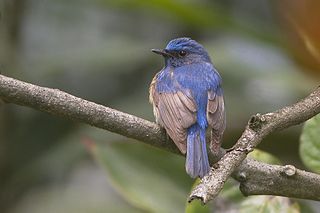 The blue-throated blue flycatcher is a small passerine bird in the flycatcher family, Muscicapidae. It resembles Cyornis tickelliae but easily separated by the blue throat. The habitat of this species is a thicker forest than other species of flycatchers. The blue-throated flycatcher is found in much of the Indian Subcontinent, all through the Himalayas, the plains and Western Ghats of India in the cold months, and also extends eastwards into Bangladesh, and to Arakan and the Tenasserim Hills in Myanmar.

The brown-breasted flycatcher or Layard's flycatcher is a small passerine bird in the flycatcher family Muscicapidae. The species breeds in north eastern India, central and Southern China and northern Burma and Thailand, and migrates to southern India and Sri Lanka. It forages for insects below the forest canopy, often close to the forest floor.

The dark-sided flycatcher is a small passerine bird belonging to the genus Muscicapa in the Old World flycatcher family Muscicapidae. It has a wide breeding distribution in the East Palearctic with northern birds migrating south for the winter. It is also known as the Siberian flycatcher or sooty flycatcher, the latter name is also used for the sooty flycatcher of Africa. 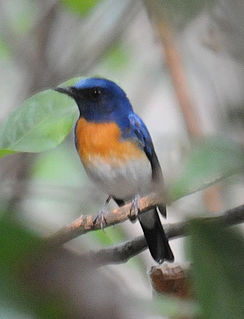 Cyornis is a genus of birds in the Old World flycatcher family Muscicapidae most of which are native to Southeast Asia. 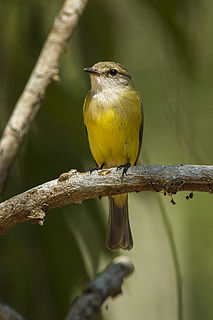 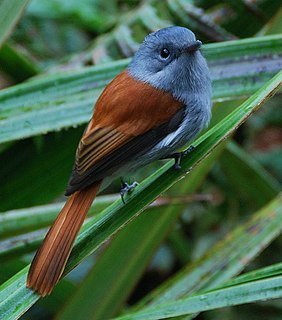 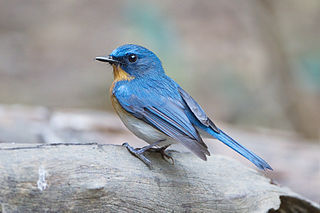 The Indochinese blue flycatcher is a species of bird in the family Muscicapidae. It is found from southern Myanmar and the Malay Peninsula to Indochina and northeastern Sumatra. It was previously considered conspecific with Tickell's blue flycatcher.

Wikimedia Commons has media related to Cyornis tickelliae .
This page is based on this Wikipedia article
Text is available under the CC BY-SA 4.0 license; additional terms may apply.
Images, videos and audio are available under their respective licenses.