Last updated August 08, 2022
This article is about the ships that entered service from 2017. For the Cold War tankers, see Tide-class replenishment oiler.

The Tide-class tanker (formerly the Military Afloat Reach and Sustainability (MARS) project) is a class of four fast fleet tankers that entered service with the British Royal Fleet Auxiliary from 2017. The 37,000 t ships provide fuel, food, fresh water, ammunition and other supplies to Royal Navy vessels around the world. Norway ordered a similar 26,000 t version with a 48-bed hospital and greater solid stores capacity, but reduced liquid capacity; it was delivered in November 2018 as HNoMS Maud two years after originally planned. The two classes are very similar, but are not directly comparable due to large variance in capabilities delivered.

The two variants are both based on the AEGIR design from Britain's BMT Defence Services but were built by Daewoo in South Korea with final outfitting in the UK and Norway respectively. Britain ordered four ships in February 2012 at a cost of £452m for the building of the hulls, but in the end became £550m.

On 22 February 2012 an order for four tankers was placed with Daewoo at a contract cost of £452m, plus an additional £150m to be spent in Britain, making a total cost for the four ships slightly over £600 million. [5] Building ships in South Korea caused controversy in Britain, but no British yards tendered for the order. [5] On 14 November 2012 it was announced that the new class would revive names from the Cold War Tide-class oilers - Tidespring (A136), Tiderace (A137), Tidesurge (A138), and the new name Tideforce (A139). [6] The previous Tidespring earned a battle honour in 1982 for her service during the Falklands War, which included transporting a company of Royal Marines to recapture South Georgia. The board carrying the honour and the ship's badge were both taken to Korea for installation in the new Tidespring. [7]

The Tide class are a 200.9 m (659 ft 1 in), 39,000 t [8] derivative of BMT Defence Services' AEGIR-26 design, [9] whose origins lie in a civilian tanker from Skipskonsulent of Norway. [10] They are double-hulled to reduce or prevent oil being lost by damage to the outer hull, in line with the MARPOL regulations for civilian tankers (from which military tankers are partially exempt). As well as being safer, this means that Tides can go to places that discouraged their single-hulled predecessors - the recently decommissioned Rover-class vessels and Leaf-classtankers. [11]

There are three stations for replenishment at sea (RAS) abeam, of diesel oil, aviation fuel and fresh water. There is also a rig for astern replenishment. The flight deck and helicopter hangar allow vertical RAS. [1] The flight deck is large and strong enough for a Chinook helicopter to land on. [12] Propulsion uses medium-speed diesel engines driving twin shafts [13] in a hybrid combined diesel-electric or diesel (CODELOD) arrangement [14] designed for fuel efficiency across a wide range of speeds.

All four ships can be armed with two 30 mm cannons and two Phalanx CIWS. [15] The 30 mm cannons are fitted aft, directed starboard, and port. One of the CIWS mounts is located forward, and the other aft. Only when a vessel is on a high-risk deployment are Phalanx CIWS and 30 mm fixtures likely to be fitted. This policy is common among RFA vessels and follows that when a ship is deployed to more dangerous theatres, such as east of Suez, heavy dedicated armament is warranted. When in home waters and carrying out more superficial tasks such as FOST, there is little need for the vessels to be equipped with heavy armaments. [16] For instance, as of June 2021, RFA Tidespring has currently been fitted with her fore and aft Phalanx CIWS fixtures and both 30 mm cannons whilst deployed worldwide with CSG21.

The design has been entered in a number of competitions, but as of March 2016 [update] the only foreign order has been for an AEGIR-18R derivative from the Royal Norwegian Navy in 2013 (see below). The AEGIR-18A, a derivative of the AEGIR-18R like the Norwegian ship but with among other things better air-conditioning, was offered to Australia for Project SEA 1654 Phase 3, a requirement for two supply ships to replace HMAS Success and HMAS Sirius. [17] In June 2014 it was shortlisted along with the Buque de Aprovisionamiento en Combate, which would be built in Spain by Navantia, [17] who have built most of Australia's recent warships. In March 2016 Australia announced it would be buying the Spanish ship. [18] In March 2016 Daewoo also lost out to Hyundai in a competition to supply New Zealand with a tanker. [19] A 2014 Daewoo presentation points out that India, Singapore and Brazil all need new supply ships in the near future. [20]

First steel was cut on 24 June 2014 for RFA Tidespring, [7] and she was named in a ceremony on 7 October 2015. [21] She was expected to arrive in Falmouth in spring 2016 to allow A&P Group to fit military equipment such as communications gear. [22] Following sea trials, Tidespring was to enter service in the fourth quarter of 2016, [23] with her three sister ships following at six-month intervals. [24] In August 2016 it was reported that RFA Tidespring was still undergoing trials with builder Daewoo Shipbuilding and Marine Engineering (DSME) in South Korea; [25] procurement minister Harriett Baldwin has blamed "delays in finalising elements of electrical design and the installation of Multi-Cable Transit insulation in accordance with new legislative regulations" which have now been resolved. [26] Tidespring reached the UK in spring 2017, docking at Falmouth on 2 April for seventeen weeks to fit weapons and communications gear. [27] Four months of acceptance trials will follow; [27] her sisters will enter service by the end of 2018. [26]

First steel for Maud was cut on 14 April 2015. [20] Delivery was planned for 30 September 2016 followed by acceptance trials in Norway in early 2017, and then FOST in the UK and other exercises before full entry into service in January 2018. [20] However, delivery was postponed due to technical problems and the vessel was finally commissioned in Norway in May 2019. [38] 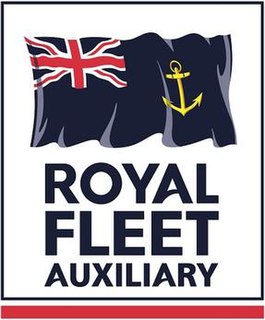 The Royal Fleet Auxiliary (RFA) is a naval auxiliary fleet owned by the UK's Ministry of Defence. It provides logistical and operational support to the Royal Navy and Royal Marines. The RFA ensures the Royal Navy is supplied and supported by providing fuel and stores through replenishment at sea, transporting Royal Marines and British Army personnel, providing medical care and transporting equipment and essentials around the world. In addition the RFA acts independently providing humanitarian aid, counter piracy and counter narcotic patrols together with assisting the Royal Navy in preventing conflict and securing international trade. They are a uniformed civilian branch of the Royal Navy staffed by British merchant sailors. 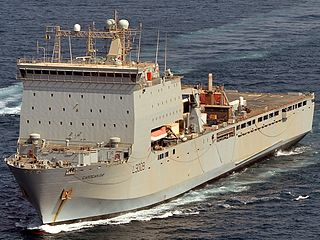 RFA Cardigan Bay is a Bay-class landing ship dock of the Royal Fleet Auxiliary (RFA). Built by BAE Systems, the ship was dedicated into the RFA at the end of 2006.

HMAS Supply was a Tide-class replenishment oiler of the Royal Fleet Auxiliary (RFA) and the Royal Australian Navy (RAN). Originally named Tide Austral and intended to be the first ship of a post-World War II Royal Australian Fleet Auxiliary, manpower and financial shortages meant that when the Belfast-built ship was launched in 1955, she could not be accepted into Australian service. Instead, she was loaned to the RFA, operating RFA Tide Austral (A99). In August 1962, the ship was commissioned directly into the RAN, then renamed a month later to HMAS Supply. Supply operated as part of the RAN until her decommissioning at the end of 1985.

The Wave-class tankers are a class of fast fleet tankers in service with the Royal Fleet Auxiliary. The class is tasked with providing fuel, food, fresh water, ammunition and other supplies to Royal Navy vessels around the world. There are two ships in the class, RFA Wave Knight and RFA Wave Ruler. The ships were ordered to replace the aging Ol-class tankers RFA Olna and RFA Olwen. The two vessels have seen service in a number of locations, including anti-drug and hurricane relief operations in the Caribbean Sea, anti-piracy activities around the Horn of Africa, and deterrent patrols in the South Atlantic. As of early 2022, both ships were earmarked for "extended readiness" status. 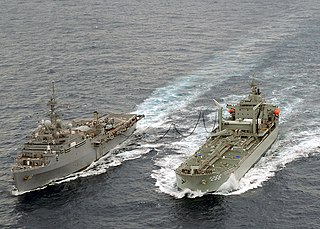 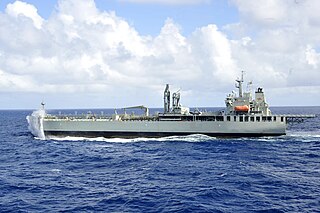 HMAS Sirius was a commercial tanker purchased by the Royal Australian Navy and converted into a fleet replenishment vessel to replace HMAS Westralia. She was named in honour of HMS Sirius of the First Fleet. Launched in South Korea on 2004, and converted in Western Australia, Sirius was commissioned in 2006; three years before a purpose-built vessel would have been built, and at half the cost. The tanker was decommissioned in 2021. 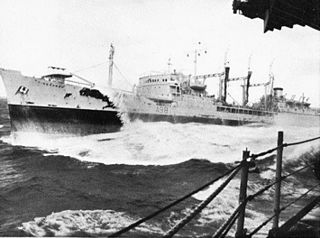 The Tide class was a series of six replenishment oilers used by the British Royal Fleet Auxiliary (RFA), the Royal Australian Navy (RAN), and the Chilean Navy.

RFA Wave Knight is a Wave-class fast fleet tanker of the Royal Fleet Auxiliary (RFA) of the United Kingdom tasked with providing fuel, food, fresh water, ammunition and other supplies to Royal Navy vessels around the world.

Daewoo Shipbuilding & Marine Engineering Co., Ltd is one of the "Big Three" shipbuilders of South Korea, along with Hyundai and Samsung. 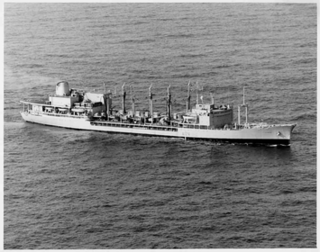 A Fleet Solid Support Ship is a type of Royal Fleet Auxiliary (RFA) ship designed to supply solids, such as ammunition, explosives and food, to Royal Navy ships at sea. The term can also refer to the programme to replace the RFA's existing solid support ships, the Military Afloat Reach and Sustainability (MARS) Fleet Solid Support (FSS) programme.

RFA Tiderace is a Tide-class replenishment tanker of the British Royal Fleet Auxiliary (RFA). Ordered from DSME in 2012, she was officially named on 1 December 2016 and was accepted by the Ministry of Defence in June 2017. Tiderace entered service on 2 August 2018. 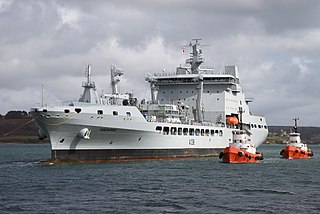 RFA Tidesurge is a Tide-class replenishment tanker of the British Royal Fleet Auxiliary (RFA). Built by DSME in 2017, she entered service with the RFA on 20 February 2019.

HMNZS Aotearoa, formerly the Maritime Sustainment Capability project, is an auxiliary ship of the Royal New Zealand Navy. Builder Hyundai Heavy Industries delivered the ship to the Navy in June 2020, and she was commissioned into service on 29 July 2020. Full operational capability was expected to be achieved in 2021. It will serve as a replenishment oiler, and has replaced HMNZS Endeavour, the Navy’s last fleet oiler, which was decommissioned in December 2017.

RFA Tideforce is a Tide-class replenishment tanker of the British Royal Fleet Auxiliary (RFA). Launched in 2017, the ship entered service with the RFA in 2019.

HNoMS Maud is a replenishment oiler constructed at Daewoo Shipbuilding & Marine Engineering in South Korea. She was built on behalf of the Norwegian Defense Materials Agency Forsvarsmateriell, for service in the Royal Norwegian Navy. 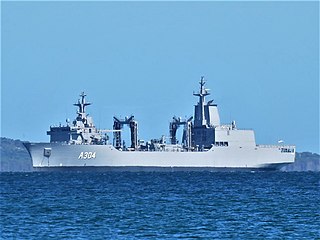 The Supply class is a class of replenishment oilers of the Royal Australian Navy, a role that combines the missions of a tanker and stores supply ship. As such they are designated auxiliary oiler replenisher (AOR). They are tasked with providing ammunition, fuel, food and other supplies to Royal Australian Navy vessels around the world. There are two ships in the class, Supply and Stalwart. The project is expected to cost anywhere between $1 and $2 billion. Navantia were selected to build a design based on the Spanish Navy's current replenishment vessel Cantabria, which entered service in 2011.

Wikimedia Commons has media related to Tide class tanker .
This page is based on this Wikipedia article
Text is available under the CC BY-SA 4.0 license; additional terms may apply.
Images, videos and audio are available under their respective licenses.