Not to be confused with emoticon.

The enotikon (ἑνωτικόν, henōtikón, lit. "uniter", from ἑνωτικός "a serving to unite or unify"), papyrological hyphen, or Greek hyphen was a low tie mark found in late Classical and Byzantine papyri. [1] In an era when Greek texts were typically written scripta continua , the enotikon served to show that a series of letters should be read as a single word rather than misunderstood as two separate words. (Its companion mark was the hypodiastole, which showed that a series of letters should be understood as two separate words. [2] ) Although modern Greek now uses the Latin hyphen, the Hellenic Organization for Standardization included mention of the enotikon in its romanization standard [3] and Unicode is able to reproduce the symbol with its characters U+203F  ‿UNDERTIE and U+035C ͜ COMBINING DOUBLE BREVE BELOW. [2] [4]

The enotikon was also used in Greek musical notation, as a slur under two notes. When a syllable was sung with three notes, this slur was used in combination with a double point and a diseme overline. [4]

In musical score engraving, the undertie symbol is called an "elision slur" or "lyric slur", [5] and is used to indicate synalepha: the elision of two or more spoken syllables into a single note; this is in contrast to the more common melisma, the extension of a single spoken syllable over multiple sung notes. Although rare in English texts, synalepha is often encountered in musical lyrics written in the Romance languages.

In use, the undertie is placed between the words of the lyric that are to be sung as one note to prevent the space between them being interpreted as a syllable break. For example, in the printed lyric "the‿im - mor - tal air", the undertie between "the" and "im-" instructs the singer to elide these two syllables into one, thus reducing five spoken syllables into four sung notes.

The International Phonetic Alphabet uses two type of ties: the ligature tie (IPA #433), above or below two symbols and the undertie (IPA #509) between two symbols.

The ligature tie, also called double inverted breve, is used to represent double articulation (e.g. [k͡p]), affricates (e.g. [t͡ʃ]) or prenasalized consonant (e.g. [m͡b]) in the IPA. It is mostly found above but can also be found below when more suitable (e.g. [k͜p]).

On computers, it is encoded with characters U+0361  ͡COMBINING DOUBLE INVERTED BREVE and, as an alternative when raisers might be interfering with the bow, U+035C  ͜COMBINING DOUBLE BREVE BELOW.

The undertie is used to represent linking (absence of a break) in the International Phonetic Alphabet. For example it is used to indicate liaison (e.g. /vuz‿ave/) but can also be used for other types of sandhi.

On computers, the character used is U+203F‿UNDERTIE. This is a spacing character, not to be confused with the alternative (below-letter) form of the ligature tie (a͜b U+035C͜COMBINING DOUBLE BREVE BELOW), which is a combining character. [6]

The Uralic Phonetic Alphabet uses several forms of the tie or double breve: [7] [8]

The double breve is used in the phonetic notation of the American Heritage Dictionary in combination with a double o, o͝o, to represent the near-close near-back rounded vowel (ʊ in IPA). [9]

The triple breve below is used in the phonetic writing Rheinische Dokumenta for three-letter combinations. [10]

In proofreading, the undertie was used to indicate that word in a manuscript had been divided incorrectly by a space. (See Hyphen#Origin and history). The indicator used in modern practice is convention is U+2050⁐CLOSE UP.

Unicode has characters similar to the tie:

An interpunct, ·, also known as an interpoint, middle dot, middot and centered dot or centred dot, is a punctuation mark consisting of a vertically centered dot used for interword separation in ancient Latin script.. It appears in a variety of uses in some modern languages and is present in Unicode as code point U+00B7·MIDDLE DOT.

A caron, háček or haček also known as a hachek, wedge, check, kvačica, strešica, mäkčeň, paukščiukas, inverted circumflex, inverted hat, or flying bird, is a diacritic (ˇ) commonly placed over certain letters in the orthography of some Baltic, Slavic, Finnic, Samic, Berber, and other languages to indicate a change in the related letter's pronunciation. 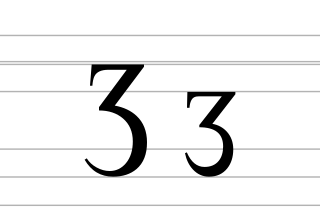 Ezh, also called the "tailed z", is a letter whose lower case form is used in the International Phonetic Alphabet (IPA), representing the voiced postalveolar fricative consonant. For example, the pronunciation of "si" in vision and precision, or the "s" in treasure. See also the letter Ž as used in many Slavic languages, the Persian alphabet letter ژ, the Cyrillic letter Ж, and the Esperanto letter Ĵ.

Ou is a ligature of the Greek letters ο and υ which was frequently used in Byzantine manuscripts. This ligature is still seen today on icon artwork in Greek Orthodox churches, and sometimes in graffiti or other forms of informal or decorative writing.

The Uralic Phonetic Alphabet (UPA) or Finno-Ugric transcription system is a phonetic transcription or notational system used predominantly for the transcription and reconstruction of Uralic languages. It was first published in 1901 by Eemil Nestor Setälä, a Finnish linguist. 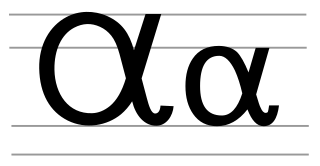 L, or l, is the 12th letter of the modern English alphabet and the ISO basic Latin alphabet. Its name in English is el, plural els.

The International Phonetic Alphabet (IPA) requires specific names for the symbols and diacritics used in the alphabet.

Unicode supports several phonetic scripts and notations through the existing writing systems and the addition of extra blocks with phonetic characters. These phonetic extras are derived of an existing script, usually Latin, Greek or Cyrillic. In Unicode there is no "IPA script". Apart from IPA, extensions to the IPA and obsolete and nonstandard IPA symbols, these blocks also contain characters from the Uralic Phonetic Alphabet and the Americanist Phonetic Alphabet.

The double grave accent is a diacritic used in scholarly discussions of the Serbo-Croatian and sometimes Slovene languages. It is also used in the International Phonetic Alphabet.

Unicode equivalence is the specification by the Unicode character encoding standard that some sequences of code points represent essentially the same character. This feature was introduced in the standard to allow compatibility with preexisting standard character sets, which often included similar or identical characters.

Inverted breve or arch is a diacritical mark, shaped like the top half of a circle ( ̑ ), that is, like an upside-down breve (˘). It looks similar to the circumflex (ˆ), but the circumflex has a sharp tip; the inverted breve is rounded: compare Ȃ ȃ Ȇ ȇ Ȋ ȋ Ȏ ȏ Ȗ ȗ versus Â â Ê ê Î î Ô ô Û û (circumflex).