Wollaston Islands
class=notpageimage|
Location of Punta Arenas and some of the principal gold findings.

Between 1883 and 1906 Tierra del Fuego experienced a gold rush attracting many Chileans, Argentines and Europeans to the archipelago, including many Dalmatians. The gold rush led to the formation of the first towns in the archipelago and fueled economic growth in Punta Arenas. After the gold rush was over, most gold miners left the archipelago, while the remaining settlers engaged in sheep farming and fishing. Indigenous Selk'nam populations declined sharply during the rush.

Early attempts to find gold centered in the rivers next to Punta Arenas which drain Brunswick Peninsula to the Strait of Magellan. Small finds occurred in 1869, and in 1870 the governor of Magallanes Óscar Viel sent a 35-gram gold nugget to Chilean president José Joaquín Pérez as a gift. [1] From April 1870 to April 1871 at least 15 kg gold were mined near Punta Arenas. [1] Most gold ended up in Valparaíso and the ships that engaged in commerce in the increasingly busy port of Punta Arenas. [1] In the 1870s a few settlers of the Falkland Islands moved to Punta Arenas to search for gold, as did John G. Hamilton and Federico Shanklin two well-known English veteran miners of California and Australia. [1] Their efforts did however appear to have failed. [1] In 1879 an expedition led by Chilean Navy officer Ramón Serrano Montaner discovered gold in some watercourses of western Tierra del Fuego. [2] [3] In 1880-1881 enterprises and mining camps at the gold fields discovered by Montaner's expedition were established. [1]

The gold rush was triggered in 1884. On the night of 23 to 24 September that year the French steamship Arctique ran aground on the northern coast of Cape Virgenes, in Argentina near the border with Chile. [2] [1] An expedition sent for its rescue discovered gold in a place called Zanja a Pique. [2] When news reached Punta Arenas many inhabitants left for Zanja a Pique. [2] There were various reports of extraordinary gold findings in Zanja a Pique, where individual Frenchmen, Germans and Chileans extracted more than ten kilograms in less than one month. [1] From Punta Arenas the news then reached Buenos Aires. [2] When the miners who acquired the Argentine mining rights for the location arrived to Zanja a Pique, almost no gold was left with miners based in Chile having already abandoned the place. [1]

The rush and Julius Popper expedition

In Buenos Aires the press compared the gold findings to the rushes of Australia and California. [2] In that city many companies were formed for the purpose of extracting gold. [2] Julio Popper, a mining engineer, was contracted by one of these companies in Buenos Aires. Popper then proceeded to recruit a number of Dalmatians from the many immigrants that lived in Buenos Aires those years. [2] With these workers Popper set out to exploit the findings of El Páramo in San Sebastián Bay. [2] Another camp was established in Sloggett Bay at the southern coast of Isla Grande de Tierra del Fuego. [2]

The gold rush reached the Chilean islands south of Beagle Channel so that by 1893 over one thousand men, most of them Dalmatians, lived there. However, by 1894 gold extraction begun to decline in these islands and deposits became gradually depleted. [2] [4] A number of enterprises formed in the 1900s to extract gold from the islands south of Beagle Channel ended with meager results. [4]

During his work in Tierra del Fuego Popper was involved in the killings of native Selk'nam, which came later to be known as the Selk'nam genocide. [5] [6]

Around the island gold diggers, sheep herders and "even police" are reported to have assaulted Indian camps to acquire their women. [3] This created a shortage of women among Fuegian tribes. [3] The capture and control of women in the main island worsened conflicts between rival groups. [3] There are also reports of trade of women during deals between men. [3] By 1894 Porvenir consisted of five houses, two of them liquor stores and a third one a brothel. [3]

The Dalmatians involved in the gold rush gradually left mining activities either to return to Dalmatia or Buenos Aires or establish themselves in Punta Arenas. [2] The gold rush caused an improvement in the geographical knowledge of the poorly known islands south of Beagle Channel and linked them to Punta Arenas. [4] Gold extracted in Isla Grande de Tierra del Fuego generally left the zone without improving much the economy of southernmost South America, but in the case of the gold extracted in from the islands south of Beagle Channel much of it ended up in Punta Arenas where it fueled economic growth. [4] 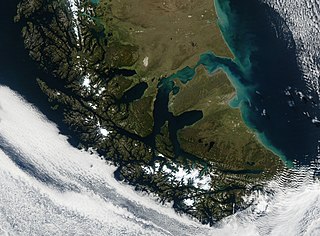 The Strait of Magellan, also called the Straits of Magellan, is a navigable sea route in southern Chile separating mainland South America to the north and Tierra del Fuego to the south. The strait is considered the most important natural passage between the Atlantic and Pacific oceans. It was discovered and first traversed by the Spanish expedition of Ferdinand Magellan in 1520, after whom it is named. Prior to this, the strait had been navigated by canoe-faring indigenous peoples including the Kawésqar. 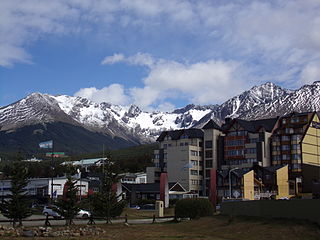 Ushuaia is the capital of Tierra del Fuego, Antártida e Islas del Atlántico Sur Province, Argentina, and the southernmost city of the country. With a population of nearly 75,000 and a location below the 54th parallel south latitude, Ushuaia claims the title of world's southernmost city. A much smaller municipality of less than 3,000 people, Puerto Williams in Chile, is nearer to the 55th parallel south, at a latitude of 54°56' S compared to Ushuaia at 54°48' S. 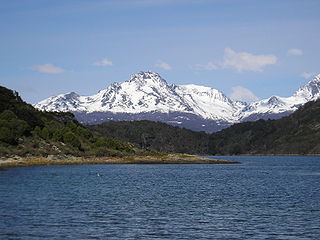 The Selk'nam, also known as the Onawo or Ona people, are an indigenous people in the Patagonian region of southern Argentina and Chile, including the Tierra del Fuego islands. They were one of the last native groups in South America to be encountered by migrant Europeans in the late 19th century. In the mid-19th century, there were about 4000 Selk'nam; by 1919 there were 297, and by 1930 just over 100.

The Yahgan are a group of indigenous peoples in the Southern Cone. Their traditional territory includes the islands south of Isla Grande de Tierra del Fuego, extending their presence into Cape Horn, making them the world's southernmost human population. 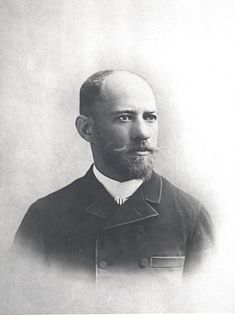 Julius Popper, also known in Spanish as Julio Popper, was a Wallachian-born Romanian-Argentine engineer, adventurer, and explorer. Popper was one of the perpetrators of the genocide against the native Selk'nam people.

Anne MacKaye Chapman was a Franco-American ethnologist who focused on the people of Mesoamerica writing several books, co-producing movies, and capturing sound recordings of rare languages from the Northern Triangle of Central America to Cape Horn in South America.

Esteban Lucas Bridges was an Anglo-Argentine author, explorer, and rancher. After fighting for the British during World War I, he married and moved with his wife to South Africa, where they developed a ranch with her brother. 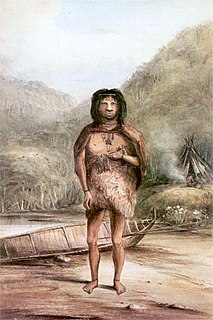 Argentine postage stamps were first issued in 1858 by the Argentine Confederation and nationally by the new Republic's National Postal Service in 1862. Due to the continuing civil wars, a number of provinces and territories, particularly in the then-remote far north and far south, continued to issue their own postage brands and stamps for some time, afterwards; some of these issues have since become collectors' items.

Mount Tarn is a small mountain located on the southernmost part of the Strait of Magellan, in Brunswick Peninsula, about 70 km south of Punta Arenas, Chile. It is in the southern extreme of continental Chile very close to Cape Froward, surrounded by historic places such as Fort Bulnes and Puerto del Hambre.

The region of the Beagle Channel, explored by Robert FitzRoy in the 1830s, was one of the last to be colonized by Chile and Argentina. The cold weather, the long distances from other inhabited regions, and the shortage of transport and subsistence, kept it far from the governmental task. 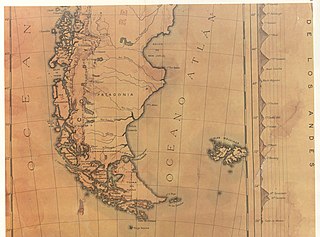 The Boundary Treaty of 1881 between Argentina and Chile was signed on 23 July 1881 in Buenos Aires by Bernardo de Irigoyen, on the part of Argentina, and Francisco de Borja Echeverría, on the part of Chile, with the aim of establishing a precise and exact border between the two countries based on the uti possidetis juris principle. Despite dividing largely unexplored lands, the treaty laid the groundwork for nearly all of Chile's and Argentina's 5600 km current border.

José Menéndez Menéndez (1846–1918) was a Spanish businessman based in Argentina and Chilean Patagonia. He was the initiator of large companies that remain to this day.

The Selk'nam genocide was the genocide of the Selk'nam people, one of three indigenous tribes populating the Tierra del Fuego in South America, from the second half of the 19th to the early 20th century. The genocide spanned a period of between ten and fifteen years. The Selk'nam had an estimated population of 4,000 people around the 1880s but saw their numbers reduced to 500 by the early 1900s.

Thomas Bridges was an Anglican missionary and linguist, the first to set up a successful mission to the indigenous peoples in Tierra del Fuego, an archipelago shared by Argentina and Chile. Adopted and raised in England by George Pakenham Despard, he accompanied his father to Chile with the Patagonian Missionary Society. After an attack by indigenous people, in 1869 Bridges' father, Despard, left the mission at Keppel Island of the Falkland Islands, to return with his family to England. At the age of 17, Bridges stayed with the mission as its new superintendent. In the late 1860s, he worked to set up a mission at what is now the town of Ushuaia along the southern shore of Tierra del Fuego Island.

Mateo Martinić Beroš is a Chilean historian, politician and lawyer. He has primarily dealt with the history of Magallanes Region. He entered the University of Chile in 1953 studying briefly pedagogy before moving on to study law and then continued his law studies in the Catholic University of Chile. He finally became a lawyer in 1983. From 1964 to 1970 he served as intendant of Magallanes Region. He received the National History Award in 2000. 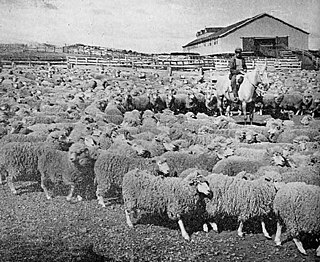 The Sociedad Explotadora de Tierra del Fuego was a historically important company operating within the Chilean and Argentine region of Patagonia. It was founded in 1893 and cultivated over 1 million hectares land for sheep farming and private factories like Puerto Bories to process, freeze and export sheep meat. 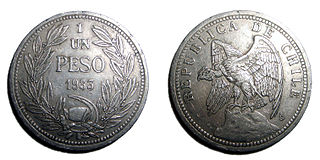