The Tony Award for Best Orchestrations is awarded to acknowledge the contributions of musical orchestrators in both musicals and plays. The award has been given since 1997.

The Pulitzer Prize for Drama is one of the seven American Pulitzer Prizes that are annually awarded for Letters, Drama, and Music. It is one of the original Pulitzers, for the program was inaugurated in 1917 with seven prizes, four of which were awarded that year. It recognizes a theatrical work staged in the U.S. during the preceding calendar year.

The Tony Award for Best Musical is given annually to the best new Broadway musical, as determined by Tony Award voters. The award is one of the ceremony's longest-standing awards, having been presented each year since 1949. The award goes to the producers of the winning musical. A musical is eligible for consideration in a given year if it has not previously been produced on Broadway and is not "determined... to be a 'classic' or in the historical or popular repertoire", otherwise it may be considered for Best Revival of a Musical.

Jonathan Tunick is an American orchestrator, musical director, and composer, one of sixteen people to have won all four major American show business awards: the Tony Awards, Academy Awards, Emmy Awards and Grammy Awards. He is best known for his work with Stephen Sondheim, starting in 1970 with Company and continuing to the present day.

The Tony Award for Best Conductor and Musical Director was awarded to acknowledge the contributions of conductors and musical directors in both musicals and operas. The award was first presented in 1948, and later discontinued after 1964.

Simon Hale is a British composer, arranger, and keyboardist.

The 54th Annual Tony Awards was held at Radio City Music Hall on June 4, 2000 and broadcast by CBS. "The First Ten" awards ceremony was telecast on PBS television. The event was hosted by Rosie O'Donnell, with special guest Nathan Lane. O'Donnell has hosted a total of three times: 1997, 1998, and 2000. 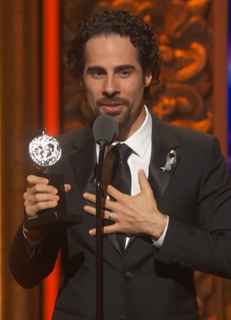 Thomas Robert Kitt is an American composer, conductor, orchestrator, and musician. For his score for the musical Next to Normal, he shared the 2010 Pulitzer Prize for Drama with Brian Yorkey. He has also won two Tony Awards and an Outer Critics Circle Award for Next to Normal, as well as Tony and Outer Critics Circle nominations for If/Then and SpongeBob SquarePants. He has been nominated for eight Drama Desk Awards, finally winning for Jagged Little Pill.

Bruce Coughlin is an American orchestrator and musical arranger. He has won a Tony Award, a Drama Desk Award, and an Obie Award.

Bill Sherman is an American composer, producer, arranger, and orchestrator. He is known for his work on In the Heights, Hamilton, and Sesame Street.