Too Much to Ask

"Too Much to Ask" is a song recorded by Irish singer and songwriter Niall Horan. It was written by Horan and Jamie Scott, with production handled by Greg Kurstin. The song was released by Capitol Records on 15 September 2017, as the third single from Horan's debut studio album, Flicker (2017). Commercially, "Too Much to Ask" reached the top 10 in Hungary, Ireland, and Scotland as well as the top 20 in Australia, Belgium, Lebanon, Malaysia, the Netherlands, and Slovakia.

Horan expressed in tweets that the song is "very special" to him and it stands out as one of his favourites on the album. [1] [2] He said of the song in an interview with BBC News: "I would obviously like it to go to number one, that would be the dream, but it is what it is. If it's getting a lot love and jumps in at number two or number three, I don't mind." [3] In the single's promotional post on social media, Horan was pictured standing on the left on the escalator in the London Underground. [4] "It's a special one. I actually wrote this song the day after I wrote 'This Town' so I felt like it got off to an alright start when I started writing the album. It's a very nice, beautiful song and means a lot to me. I just can't wait for people to hear it. Hopefully fingers cross that people are going to like it, obviously a lot different to 'Slow Hands'," Horan explained in a Smallzy's Surgery interview. [5]

Mike Wass of Idolator was positive about the song, saying: "Niall Horan's solo career continues to go from strength to strength with the arrival of 'Too Much To Ask.' A tender ballad about hankering for an ex, the track showcases the Irishman's simple, heartfelt approach." And went on to call it "a beautifully crafted song" with a "melancholy piano arrangement". [7] Rianne Houghton from Digital Spy was also positive about the song, and said: "Gird your loins, and your tear ducts 1D fans! Niall has released his latest single and it's definitely a tear-jerker. Seriously Niall, who hurt you?" [8]

Niall uploaded the official audio on day of release to his YouTube Vevo account and then the official music video six days later on 21 September 2017. It was directed by Malia James. Jon Blistein of Rolling Stone explained the video in his review about the song's video, writing:

"The Malia James-directed clip finds Horan grappling with lost love as he sings the poignant and nostalgic lyrics in an empty room and watches a couple flirt and kiss on the tube. Horan finds solace while sharing a pint and playing the tune with his mates, though the clip ends with the musician contending with loneliness as he wanders the streets of London." [9]

Flicker is the debut studio album by Irish singer Niall Horan. It was released on 20 October 2017 through Neon Haze Music and Capitol Records. "This Town" was released on 29 September 2016 as the album's lead single, followed by "Slow Hands", "Too Much to Ask", "On the Loose" and "Seeing Blind". 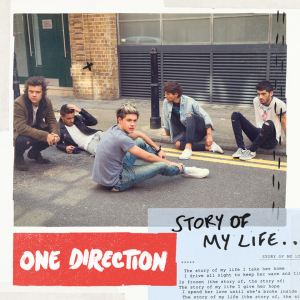 "Story of My Life" is a song recorded by English-Irish boy band One Direction. It was released on 28 October 2013 by Syco Music and Columbia Records as the second single from the group's third studio album, Midnight Memories (2013). Written by band members Niall Horan, Zayn Malik, Harry Styles, Liam Payne, and Louis Tomlinson, along with Julian Bunetta, Jamie Scott, John Ryan, and Hanoch Dagan. The lyrics speak of a tumultuous relationship leading to lament and heartbreak. 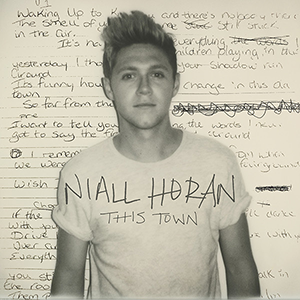 "This Town" is the debut solo single by Irish singer Niall Horan, released on 29 September 2016 by Capitol Records as the lead single from debut solo album Flicker (2017). An accompanying music video of a live performance was released the same day. The song was written by Horan, Jamie Scott, Mike Needle, Daniel Bryer, Ruairi Sheridan, Aodhán Dorrian and produced by Greg Kurstin. It is Horan's first solo single, as well as the second solo single released by any of One Direction's remaining members, following the hiatus of the band, which was announced earlier in 2016. It peaked at number 9 on the UK Singles Chart, and number 20 on the US Billboard Hot 100. 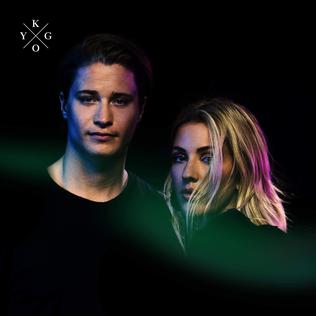 "First Time" is a song by Norwegian DJ Kygo and English singer Ellie Goulding. It was released on 28 April 2017, as the second single from Kygo's first EP, Stargazing (2017). 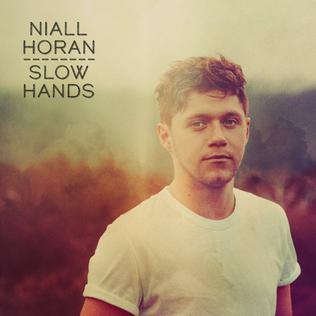 "Slow Hands" is a song recorded by Irish singer and songwriter Niall Horan, released as a single on 4 May 2017 by Capitol Records. The song was written by Horan, Alexander Izquierdo, John Ryan, Julian Bunetta, Ruth Anne Cunningham and Tobias Jesso Jr., while the production was handled by Bunetta. It was serviced to US contemporary hit radio on 9 May 2017 as the second single from Horan's debut solo album Flicker (2017). 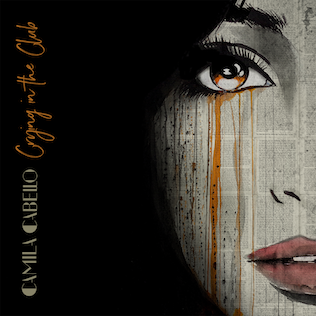 "Crying in the Club" is the debut solo single by Cuban-American singer Camila Cabello, released on May 19, 2017. It was written by Cabello, Sia, Benny Blanco and produced by Blanco, Happy Perez and Cashmere Cat. The song samples Christina Aguilera's "Genie in a Bottle". A mid-tempo tropical pop and dance track which incorporates elements from R&B, it was originally intended to be the lead single of Cabello's debut studio album, which was originally titled The Hurting. The Healing. The Loving. It was later removed from the track listing and featured on the Side A of the 7-inch eponymous extended play released on July 14, 2017. The song reached number three in Bulgaria, as well as the top forty in eleven additional countries. "Crying in the Club" is certified Platinum in the US, UK, Canada, Australia, and Italy. It is the first single since her departure from American girl group Fifth Harmony.

"Came Here for Love" is a song by English DJ and record producer Sigala and English singer-songwriter Ella Eyre. It was written by Klingande, Bryn Christopher and Scott Wild, with the song's production handled by Sigala, Klingande and White N3rd. It was released to digital retailers on 9 June 2017, through Ministry of Sound Group and B1 Recordings.

"Instruction" is a song by English DJ and record producer Jax Jones, featuring American singer Demi Lovato and English rapper Stefflon Don. It was written by MNEK, Stefflon Don, Demi Lovato and Jax Jones, with the song's production handled by Jax Jones and Mark Ralph. It was released on 16 June 2017, through Polydor Records. "Instruction" is included on the deluxe edition of Lovato's sixth studio album, Tell Me You Love Me.

"On the Loose" is a song recorded by Irish singer and songwriter Niall Horan from his debut studio album Flicker. It was written by Horan, John Ryan and its producer Julian Bunetta. The song was released to the US Mainstream Top 40 radio on 20 February 2018 as the album's fourth single. An alternate version was released on 16 February 2018.

"Bank Account" is a song by Atlanta-based rapper 21 Savage. It was serviced to rhythmic and urban radio on August 8, 2017, as the lead single from his debut studio album Issa Album. 21 Savage wrote and co-produced the song along with Metro Boomin. A music video was released on November 10, 2017. 21 referred to the song as the de facto single of Issa Album. The song contains a sample from the soundtrack album of The Education of Sonny Carson. 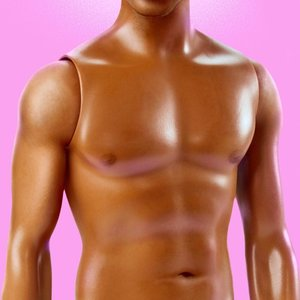 "Boys" is a single by English singer Charli XCX, released on 26 July 2017 by Asylum Records and Atlantic Records UK. The song was originally intended to be the second single of her then-upcoming third studio album XCX World, but due to the leak of the album, it was not included. The song makes frequent use of a sample from the Nintendo video game Super Mario Bros.

"Silence" is a song by American music producer and DJ Marshmello, featuring guest vocals from American singer-songwriter Khalid. Written and produced by Marshmello, with additional writing from Khalid, it was released by RCA Records on August 11, 2017.

"Friends" is a song by Canadian singer Justin Bieber and American record producer and songwriter BloodPop. It was written by Bieber, Julia Michaels, Justin Tranter and BloodPop, with production handled by BloodPop. The song was released through Genpop Corporation, RBMG Records, School Boy Records, Def Jam Recordings and Republic Records on August 17, 2017. It is Bieber's first single credited as lead artist to be released in over a year, the previous being "Company", which was released in March 2016 for his studio album Purpose (2015). "Friends" peaked at number two on the UK Singles Chart and number 20 on the Billboard Hot 100. On October 20, 2017, Bieber and BloodPop released a remix version of the song featuring American singer-songwriter, Julia Michaels.

"Too Good at Goodbyes" is a song by English singer Sam Smith. It was written by James Napier, Tor Hermansen, Mikkel Eriksen and Smith, and produced by Napes, Steve Fitzmaurice and StarGate. It was released on 8 September 2017 through Capitol Records, as the lead single from their second studio album, The Thrill of It All (2017). 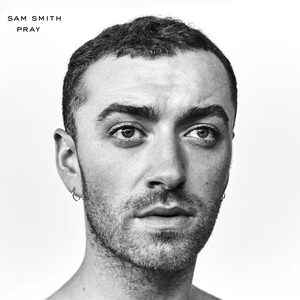 "Pray" is a song by English singer and songwriter Sam Smith. It was written by Smith, Larrance Dopson, Darryl Pearson, Timbaland, Jose Valasquez and Jimmy Napes, with production handled by Timbaland, Napes and Steve Fitzmaurice. The song was released on 6 October 2017 through Capitol Records, as a promotional single from Smith's second studio album, The Thrill of It All (2017). A new version of the song featuring American rapper Logic was released as the third single from the album on 29 March 2018.

"Thunderclouds" is a song by pop music supergroup LSD. It was released on August 9, 2018, by Columbia Records as the third single from LSD's debut studio album of the same name, following "Genius" and "Audio". The song was written by Labrinth, Sia, Diplo, King Henry, and Jr Blender; while being produced by Labrinth, Diplo, and Jr Blender. 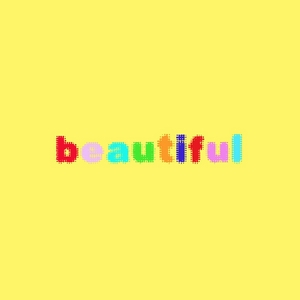 "Beautiful" is a song by American singer Bazzi. The song was initially self-released digitally on July 2, 2017. The song was later featured as the 13th track on the album Cosmic, which was released on April 12, 2018. 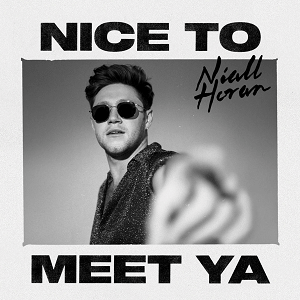 "Nice to Meet Ya" is a song by Irish singer Niall Horan, released through Capitol Records as the lead single from his second studio album Heartbreak Weather on 4 October 2019. Horan co-wrote the track with Ruth-Anne Cunningham in one day.