The toothless catfish (Anodontiglanis dahli) is a species of catfish (order Siluriformes) of the family Plotosidae. [1] [2] This fish originates from northern Australia, including Fitzroy, Daly, East Alligator, Roper, Mitchell, and Archer Rivers, in lentic and lotic freshwater habitats. [1] It grows up to about 40.0  centimetres (15.7  in) TL. [3]

The toothless catfish lives in clear, flowing waters. It has been reported to be solitary, but it also often forms aggregations around log snags or in deeper rock pools. It also occurs in sandy bottoms around the cover of woody debris and in flooded lagoons. This fish feeds on aquatic insects, mollusks, prawns, and bottom detritus by thrusting its snout into the sandy bottom. Nothing is specific is known about the breeding biology, but it probably spawns early in the wet season. This fish most definitely does not have teeth. [3]

The eeltail catfish are a family (Plotosidae) of catfish whose tails are elongated in an eel-like fashion. These catfishes are native to the Indian Ocean and western Pacific from Japan to Australia and Fiji. The family includes about 41 species in 10 genera. About half of the species are freshwater, occurring in Australia and New Guinea.

Trichomycteridae is a family of catfishes commonly known as pencil catfishes or parasitic catfishes. This family includes the candiru fish, feared by some people for its alleged habit of entering into the urethra of humans. Another species is the life monsefuano which was important to the Moche culture and still an important part of Peruvian cuisine.

Akysis is the largest genus of catfishes of the family Akysidae.

The gilded catfish or jau is a South American catfish of the family Pimelodidae. Also known as manguruyu or black manguruyu. 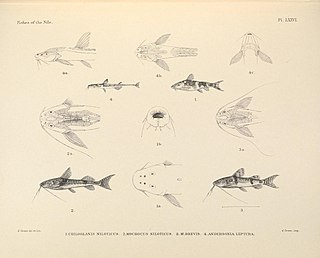 Andersonia leptura is a species of catfish of the family Amphiliidae, and is the only species of the genus Andersonia. This fish grows to about 50.0 cm (19.7 in) in total length; it is found in the Omo, Niger, and Upper Nile Rivers and the Lake Chad basin, and is also known from Lake Debo. Although previously considered to be toothless on the lower jaw, dentition has been found on the premaxilla and the dentary. The teeth are embedded in the mucous sheath that covers the head and extends into the oral cavity, which makes the teeth difficult to see with the naked eye.

Paracanthopoma parva is a species of catfishes of the family Trichomycteridae. P. parva grows to about 2.7 centimetres (1.1 in) SL and is endemic to Brazil where it occurs in the Amazon and Essequibo River basins.

Pareiodon microps is a species of catfish of the family Trichomycteridae, and the only species of the genus Pareiodon. It is endemic to Brazil where it occurs in the Amazon Basin.

Paravandellia is a genus of pencil catfishes native to South America.

Trichogenes longipinnis, is a species of catfish of the family Trichomycteridae. T. longipinnis is endemic to coastal streams in the Atlantic forest between Rio de Janeiro and São Paulo States in southeastern Brazil.

Microcambeva is a genus of catfishes of the family Trichomycteridae. 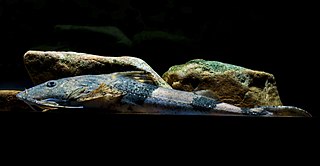 Bagarius is an Asian genus of catfishes of the family Sisoridae. It includes five to six extant species and potentially one extinct fossil species, B. gigas.

The freshwater cobbler, Tandanus bostocki, is a species of catfish of the family Plotosidae. The freshwater cobbler originates from coastal drainages of southwestern Australia, from the Frankland River to the Moore River. The species may reach about 50 centimetres (20 in) total length.

Euristhmus is a genus of eeltail catfishes native to the eastern Indian-western Pacific Oceans around Australia, New Guinea and Indonesia.

Micromyzon akamai is a species of catfish in the family Aspredinidae.

Batrachocephalus mino, the beardless sea catfish, is the only species of catfish in the genus Batrachocephalus of the family Ariidae. This species occurs in marine and brackish waters of Bay of Bengal, and parts of the western central Pacific, in coastal waters, estuaries, and lower reaches of rivers. It is distributed from Pakistan, India, Sri Lanka, Bangladesh, Myanmar, Malaysia, Thailand, to Indonesia.

Siluranodon auritus is the only species in the genus Siluranodon of the catfish family Schilbeidae.

Ketengus typus, the bigmouth sea-catfish, is the only species in the sea catfish genus Ketengus.