Top Shelf Coffee, Inc. is a US privately owned and operated coffee company. Top Shelf Coffee was founded in 1994 as Top Shelf Coffee and Foods. The company was a medium scale business, operating mostly within Ohio; serving local factories, restaurants and coffee shops both small and large. [1]

Einstein Bros. Bagels is an American bagel and coffee chain.

Iced coffee is a type of coffee beverage served chilled, brewed variously with the fundamental division being cold brew – brewing the coffee cold, yielding a different flavor, and not requiring cooling – or brewing normally (hot) and then cooling, generally by simply pouring over ice or into ice cold milk. In hot brewing, sweeteners and flavorings are often mixed into the hot coffee before cooling, due to faster dissolution in hot water. Alternatively, syrup may be used, particularly gum syrup.

Bruegger's Enterprises, Inc. is a restaurant operator and subsidiary of the Luxembourg-based company JAB Holding Company. It and its wholly owned subsidiary Threecaf Brands Canada, Inc., are franchisers and operators of Bruegger's bakery-cafés, and Michel's Baguette.

Caribou Coffee Company is an American coffee company and coffeehouse chain. Caribou Coffee was founded in Edina, Minnesota, in 1992. As of May 2015, the company operates 603 locations worldwide.

Top Shelf Productions is an American publishing company founded in 1997, originally owned and operated by Chris Staros and Brett Warnock and a small staff. Now an imprint of IDW Publishing, Top Shelf is based in Marietta, Georgia.

Roasting coffee transforms the chemical and physical properties of green coffee beans into roasted coffee products. The roasting process is what produces the characteristic flavor of coffee by causing the green coffee beans to change in taste. Unroasted beans contain similar if not higher levels of acids, protein, sugars, and caffeine as those that have been roasted, but lack the taste of roasted coffee beans due to the Maillard and other chemical reactions that occur during roasting.

Gloria Jean's Coffees is a franchised specialty coffeehouse company that has opened more than 1,000 coffee houses across 39 markets worldwide, including over 460 in Australia. In 2014 Gloria Jeans was purchased by the Retail Food Group for $163.5 million.

Saputo Inc. is a Montreal-based Canadian dairy company founded in 1954 by the Saputo family. Currently, Saputo produces, markets, and distributes a wide array of dairy products, including cheese, fluid milk, extended shelf-life milk and cream products, cultured products and dairy ingredients. It is one of the top ten dairy processors in the world. After growing in its home region of Quebec, the company has expanded predominantly through mergers and acquisitions.

Van Houtte Inc. is a company based in Montreal, Quebec, Canada that processes, distributes and sells coffee and coffee related goods. It was founded by Albert-Louis Van Houtte.

Keurig is a beverage brewing system for home and commercial use. It is manufactured by the American company Keurig Dr Pepper via its east-coast headquarters in Burlington, Massachusetts. The main Keurig products are: K-Cup pods, which are single-serve coffee containers; other beverage pods; and the proprietary machines that brew the beverages in these pods.

Keurig Dr Pepper, formerly Keurig Green Mountain (2014–2018) and originally Green Mountain Coffee Roasters (1981–2014), is a publicly traded American beverage and beverage-maker conglomerate with dual headquarters in Burlington, Massachusetts and Plano, Texas. Its east-coast division sells coffee and other beverages, and Keurig brewers. As of July 2018, the newly merged conglomerate also sells sodas, juices, and other soft drinks via its Dr Pepper Snapple division based in Texas.

Pick-N-Pay Supermarkets was a chain of supermarkets which operated in the Greater Cleveland, Ohio area. The company's origin can be traced to the year 1928 and the opening of a small dairy store in Cleveland Heights, Ohio by Edward Silverberg who then expanded his operation and created a chain of such stores which he called Farmview Creamery Stores. In 1938, Mr. Silverberg opened a supermarket on E. 185th Street which he called Pick-N-Pay. In 1940, he changed the name of all his stores to Pick-N-Pay Supermarkets. He grew the chain to a total of 10 stores and in 1951 sold the company to Cook Coffee Company. Under Cook Coffee's ownership, the chain continued to grow through expansion and through Pick-N-Pay's acquisition of the Foodtown supermarkets in 1959. In 1972, it was sold to a group of private investors led by Julius Kravitz, who continued the use of the brand for the newly independent company. Principal competitors in the Greater Cleveland market were the Fisher-Fazio-Costa, Stop-N-Shop, and Heinen's grocery chains.

A well drink or rail drink is an alcoholic beverage served using the lower-cost liquors stored within easy reach of the bartender in the counter "speed rail" or well. Well drinks differ from "call" drinks in that the former are offered when a customer does not specify a particular brand of liquor when ordering a mixed drink. The terms "well drink" and "rail drink" come from the name for a bartender's workspace, known as either the well or the rail. In any given establishment, the rail/well liquors available may be known as the "house pours" or "house brands". 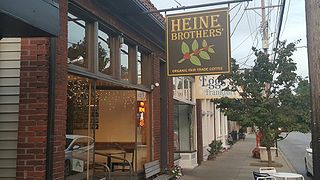 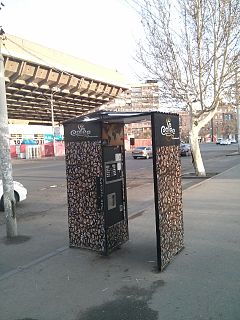 The coffee vending machine is a vending machine that dispenses hot coffee and other coffee beverages. Older models used instant coffee or concentrated liquid coffee and hot or boiling water, and provided condiments such as cream and sugar. Some modern machines prepare various coffee styles such as mochas and lattes and use ground drip coffee, and some fresh-grind the coffee to order using a grinder in the machine.