The Topeka shiner (Notropis topeka) is a North American species of cyprinid freshwater fish. The Topeka shiner is a type of minnow that does not grow longer than a few inches. This minnow is a shiny silver color its main physical characteristic is the black colored stripe that runs along the side of the body.

It is distributed in the Mississippi River basin, from southern Minnesota and southeastern South Dakota south to central Missouri and southern Kansas.

Minnow is the common name for a number of species of small freshwater fish, belonging to several genera of the family Cyprinidae. They are also known in Ireland as pinkeens. 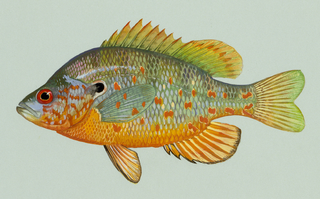 The orangespotted sunfish is a North American species of freshwater fish in the sunfish family (Centrarchidae) of order Perciformes. These fish are widely distributed across the middle and eastern United States, from the Rocky Mountains to the east, from the Great Lakes south into the Gulf Coast. The orangespotted sunfish is ecologically unique and thrives in turbid, shallow systems that have few predators and low oxygen contents. The species prefers vegetated areas in sluggish backwaters or lakes, and can also be found in turbid rivers. The orangespotted sunfish can extend its range in lower-quality waters, which is not characteristic to other sunfish. Orangespotted sunfish vary in total length and age for different river basin originations, but can be found to live four to seven years, and recorded lengths are up to 15 cm (5.9 in).

The Cape Fear shiner is a North American species of freshwater fish in the family Cyprinidae. It is endemic to the central part of the state of North Carolina in the southeastern United States, and is only found in the shallow streams of the Cape Fear River basin. The fish is small and yellow with black lips and a black stripe that runs down the middle of the fish's side. This shiner is normally found in mixed schools with other minnow species. It is unique amongst its genus because it has elongated intestines that are specifically adapted to a primarily herbivorous diet. It can breed twice a year and normally lives for only two or three years in the wild. The males and females are normally similar in appearance but become different colors in the spawning season. This species of shiner was not discovered until 1962.

The sharpnose shiner is a species of ray-finned fish in the family Cyprinidae, the carps and minnows. It is endemic to Texas in the United States, where it is limited to the upper Brazos River basin. In 2013 it became a candidate for federal listing as an endangered species of the United States.

The bridle shiner is a member of the minnow family (Cyprinidae). This species has been identified as being of Special Concern by the Committee on the Status of Endangered Wildlife in Canada (COSEWIC).

The sand shiner is a widespread North American species of freshwater fish in the family Cyprinidae. Sand shiners live in open clear water streams with sandy bottoms where they feed in schools on aquatic and terrestrial insects, bottom ooze and diatoms.

The comely shiner is a small species of North American fish belonging to the family Cyprinidae.

The pugnose shiner is a species of ray-finned fish in the genus Notropis. It is in the family Cyprinidae which consists of freshwater carps and minnows. Cyprinidae is the largest fish family which consists of about 369 genera and 3,018 species. Its distribution has been decreasing due to the removal of aquatic plants in order to create swimming beaches and boating access in freshwater lakes and is now mostly found in Minnesota, Wisconsin, and Michigan.

The popeye shiner is a North American species of freshwater cyprinid fish.

The bigeye shiner is a species of ray-finned fish in the genus Notropis. This fish is a slender, silvery minnow with a dusky lateral stripe and a maximum total length of about 80 mm. Its distinct characteristic is its large-diameter eyes. It is a common species in upland streams of the middle Mississippi River system. Bigeye shiners prefer warm, quiet pools with clear water and silt-free substrates. Siltation, channelization, and gravel dredging are all threats to bigeye shiner populations. During spawning season, typically late April to August, bigeye shiners have several clutches of eggs. State agencies and the EPA have both played a role in the surveying of bigeye shiner populations. Populations have decreased in Ohio due mostly to habitat destruction. In addition to habitat destruction by humans, habitat alteration of the small streams and dried pools has also had a significant effect on abundance. Rivers and streams should not be channelized or modified in any way, which is becoming an increasingly popular trend in urban locations. Agricultural areas and properties within the watershed should adhere to regulations to prevent runoff into the streams.

The blackchin shiner is an abundant North American species of freshwater fish from the family Cyprinidae. Described by Edward Drinker Cope in 1865, it is not a well-known species. It is a close relative of the blacknose shiner. Chiefly occurring now in the Great Lakes and occasionally in upper Mississippi River drainages, the blackchin once ranged commonly as far south as Illinois and Ohio. This fish resides over sandy bottoms in cool waters that provide a lot of cover for the small minnow. Omnivorous, it eats worms and small arthropods as well as plant material. Blackchin shiners are unique because of their anatomical features, such as the black coloring, the incomplete lateral line, and a distinctive dental arrangement.

The spottail shiner or spottail minnow is a small- to medium-sized freshwater minnow. It can be found as far north as Canada and as far south as the Chattahoochee River in Georgia. These shiners live in lakes, rivers, and creeks. They occupy the rocky or sandy shorelines and bottoms of the water. One of the defining features of a spottail shiner is the black spot found at the base of the caudal fin. These shiners generally spawn from late June through July.

The mimic shiner is a species of North American cyprinid freshwater fish in the genus Notropis. The genus Notropis is commonly known as the eastern shiners. It is native to areas of the Hudson Bay drainage, Great Lakes drainage, much of the Mississippi River basin including areas of Tennessee, Virginia, North Carolina, and regions of the Gulf of Mexico extending from Mobile Bay to the drainage of Texas. However, this particular species can be found in other places such as the Atlantic Coast drainage in Connecticut and Housatonic rivers. This genus is usually characterized by almost all having a complete lateral line, 8 dorsal fin rays, a premaxillae protactile, and a silvery or speckled peritoneum. As the common name indicates, this species is difficult to classify in the wild because it looks similar to many other shiners. In fact, some even hypothesize that this species is actually a complexity of many cryptic species. While this is the case, it is important to take more caution to not misidentify this species and to understand its impact on introduced areas. 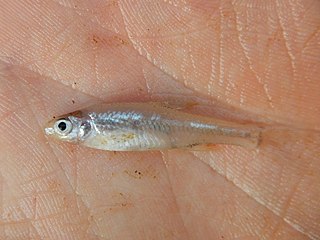 The ghost shiner is a North American species of freshwater fish of the family Cyprinidae. It is generally characterized as being a small bodied, silvery and fusiform shaped cyprinid. Notropis buchanani is morphologically similar to and often mistaken for the Mimic Shiner, which is evident by its former classification as a subspecies of Notropis volucellus.

The red shiner or red-horse minnow is a North American species of freshwater fish in the family Cyprinidae. They are deep-bodied and laterally compressed, and can grow to about three inches in length. For most of the year, both males and females have silver sides and whitish abdomens. Males in breeding coloration, though, have iridescent pink-purple-blue sides and a red crown and fins.

The scarlet shiner is a freshwater fish native to the eastern United States.

The bigmouth shiner, is one of the 324 fish species found in Tennessee. It is a common minnow species found in the midwest region, but found as far as the east coast. There has been little information researched about this unremarkable minnow outside of the general body plan and habitat. They are often found along with common shiner in streams.

The bleeding shiner is a freshwater ray-finned minnow in the family Leuciscidae, which was recently changed to distinguish between North American and Asian minnows. It occurs in tributaries of Ozark-draining tributaries of the Missouri, and Mississippi rivers in southern Missouri and northeastern Arkansas. Its preferred habitat is rocky and sandy pools and runs of headwaters, creeks and small rivers.