Torit is the capital and largest city of Eastern Equatoria State in South Sudan.

On 18 August 1955, the Equatoria Corps mutinied at Torit, starting the First Sudanese Civil War. [2] In 1964 the military government in Khartoum closed "all the Christian mission schools" in the area. [3] Torit was upgraded to Municipality status administered by a mayor on August 19, 2013. [4]

Equatoria International University temporarily opened in Torit on 21 June 2019, although the university is building a permanent site south of the city. [9]

The following points of interest are found in Torit: 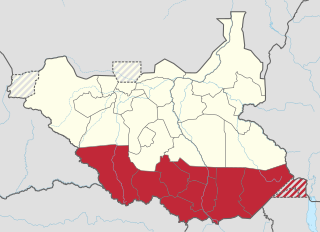 Equatoria is a region of southern South Sudan, along the upper reaches of the White Nile. Originally a province of Anglo-Egyptian Condominium, it also contained most of northern parts of present-day Uganda, including Lake Albert and West Nile. It was an idealistic effort to create a model state in the interior of Africa that never consisted of more than a handful of adventurers and soldiers in isolated outposts. 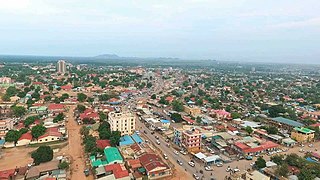 Juba is the capital and largest city of South Sudan. The city is situated on the White Nile and also serves as the capital of Central Equatoria State. It is the world's newest capital city, and had a population of 525,953 in 2017. It has an area of 52 km2 (20 sq mi), with the metropolitan area covering 336 km2 (130 sq mi).

Wau is a city in northwestern South Sudan, on the western bank of the Jur River, that serves as capital for Western Bahr el Ghazal. It lies approximately 650 kilometres (400 mi) northwest of the capital Juba. A culturally, ethnically and linguistically diverse urban center and trading hub, Wau is also the former headquarters of Western Bahr el Ghazal.

Yambio is a city in South Sudan.

The Roman Catholic Diocese of Torit is a diocese located in Torit in the Ecclesiastical province of Juba in South Sudan.

Torit Airport is an airport serving the town of Torit, in South Sudan. 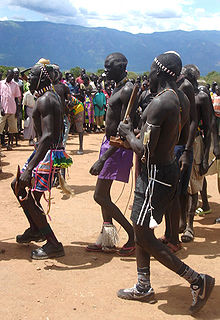 Kapoeta is a town in South Sudan. It is located in Kapoeta South County, in Eastern Equatoria State, in southeastern South Sudan. 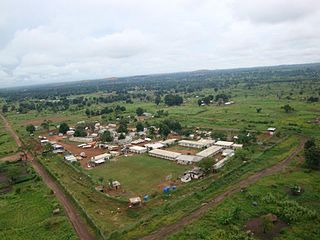 Maridi is a town in South Sudan. 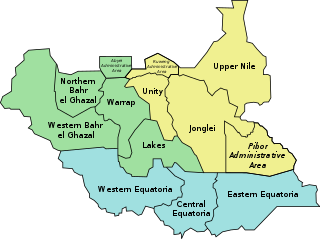 The States of South Sudan were created out of the three historic former provinces of Bahr el Ghazal (northwest), Equatoria (southern), and Greater Upper Nile (northeast). The states are further divided into 180 counties.

Torit County is an administrative region in Torit State of South Sudan, with headquarters in the town of Torit, which is also the state capital.

Kapoeta South County is an administrative region in Eastern Equatoria State. The county logo is a ram with horns and slightly bent tail. The county includes the Kapoeta Town, Machi and Namorunyang Payams.

Saturnino Ohure Hilangi, or Saturnino Lohure was a Roman Catholic priest and a politician who played an important role in the early movement for secession of South Sudan.

Imatong State was a state in South Sudan that existed between 2 October 2015 and 22 February 2020. It was located in the Equatoria region and it bordered Yei River to the southwest, Jubek to the west, Terekeka and Jonglei to the northwest, Boma to the northeast, Namorunyang to the east, and Uganda to the south.

Terekeka State was a state in South Sudan that existed between 2 October 2015 and 22 February 2020. It was located in the Equatoria region and it bordered Amadi, Eastern Lakes, Imatong, Jonglei, and Jubek. It has an estimated population of 176,030 in 2014, and the capital and largest city of the state is Terekeka, South Sudan.

This article lists events from the year 2019 in South Sudan

The COVID-19 pandemic in South Sudan is part of the ongoing worldwide pandemic of coronavirus disease 2019 caused by severe acute respiratory syndrome coronavirus 2. The virus was confirmed to have reached South Sudan on 5 April 2020. The first four confirmed cases were all UN workers.