Trinity and Beyond: The Atomic Bomb Movie is a 1995 American documentary film directed by Peter Kuran and narrated by William Shatner. [3]

Using restored archive footage, the film traces the development of nuclear weapons and their testing, from America's Trinity test of 1945 (hence the title) to the first Chinese atomic bomb test in 1964. Kuran's commentary on the DVD version claims that the DVD replaces some of the original footage with better-quality versions. There are some short special effects sequences too. The film has also since been released on Blu-ray. [4]

Included is footage of nuclear tests starting with the May 1945 trial run to Trinity (the first atomic bomb), a 100-ton TNT blast used to scale and calibrate the Trinity device, and ending with the last U.S. atmospheric nuclear detonation (called Tightrope) of the Nike Hercules air defense missile in 1963. Also included are test series in the South Pacific, footage of the firing of the U.S. Army's atomic cannon at the Nevada Test Site in 1953, and color images of multi-megaton high altitude air bursts over Johnston Island just before the limited test ban treaty went into effect (banning all except underground detonations) in 1963. [5]

The film's publicity claims that much of the American footage is newly declassified and previously unseen. Kuran's research brought him into contact with many of the cameramen who photographed the American tests, leading to the production of another documentary, Atomic Filmmakers which featured their reminiscences of working on the program. A new patented image restoration process was used for the first time to improve considerably the image quality of old and fading film stock. [6]

The film's music (composed by William T. Stromberg) was performed by the Moscow Symphony Orchestra, symbolizing the end of the cold war.

Footage from a Soviet documentary about the Tsar Bomba is featured in Trinity and Beyond, where it is referred to as the Russian monster bomb. [7] 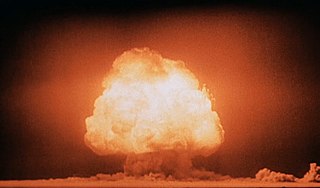 Trinity was the code name of the first detonation of a nuclear device. It was conducted by the United States Army at 5:29 a.m. on July 16, 1945, as part of the Manhattan Project. The test was conducted in the Jornada del Muerto desert about 35 miles (56 km) southeast of Socorro, New Mexico, on what was then the USAAF Alamogordo Bombing and Gunnery Range, now part of White Sands Missile Range. The only structures originally in the vicinity were the McDonald Ranch House and its ancillary buildings, which scientists used as a laboratory for testing bomb components. A base camp was constructed, and there were 425 people present on the weekend of the test. 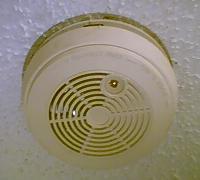 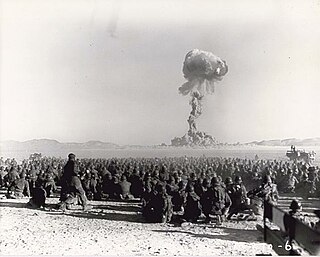 The Nevada National Security Site, known as the Nevada Test Site (NTS) until August 23, 2010, is a United States Department of Energy (DoE) reservation located in southeastern Nye County, Nevada, about 65 miles (105 km) northwest of the city of Las Vegas. Formerly known as the Nevada Proving Grounds, the site was established on January 11, 1951 for the testing of nuclear devices, covering approximately 1,360 square miles (3,500 km2) of desert and mountainous terrain. Nuclear weapons testing at the Nevada Test Site began with a 1-kiloton-of-TNT (4.2 TJ) bomb dropped on Frenchman Flat on January 27, 1951. Over the subsequent four decades, over one thousand nuclear explosions were detonated at the NTS. Many of the iconic images of the nuclear era come from the NTS. NNSS is operated by Mission Support and Test Services, LLC.

The Atomic Age, also known as the Atomic Era, is the period of history following the detonation of the first nuclear weapon, The Gadget at the Trinity test in New Mexico, on July 16, 1945, during World War II. Although nuclear chain reactions had been hypothesized in 1933 and the first artificial self-sustaining nuclear chain reaction had taken place in December 1942, the Trinity test and the ensuing bombings of Hiroshima and Nagasaki that ended World War II represented the first large-scale use of nuclear technology and ushered in profound changes in sociopolitical thinking and the course of technological development. 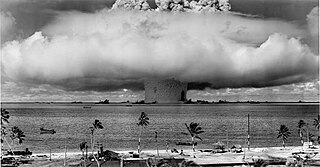 Nuclear weapons tests are experiments carried out to determine the effectiveness, yield, and explosive capability of nuclear weapons. Testing nuclear weapons offers practical information about how the weapons function, as well as how detonations are affected by different conditions; and how personnel, structures, and equipment are affected when subjected to nuclear explosions. However, nuclear testing has often been used as an indicator of scientific and military strength, and many tests have been overtly political in their intention; most nuclear weapons states publicly declared their nuclear status by means of a nuclear test. 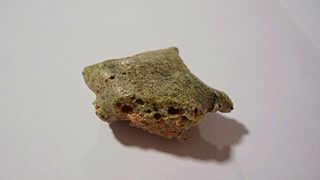 Trinitite, also known as atomsite or Alamogordo glass, is the glassy residue left on the desert floor after the plutonium-based Trinity nuclear bomb test on July 16, 1945, near Alamogordo, New Mexico. The glass is primarily composed of arkosic sand composed of quartz grains and feldspar that was melted by the atomic blast. It was first academically described in American Mineralogist in 1948. 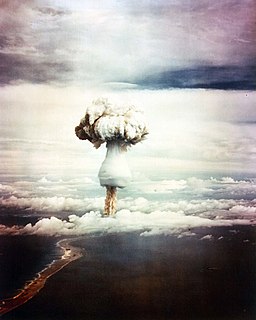 Operation Greenhouse was the fifth American nuclear test series, the second conducted in 1951 and the first to test principles that would lead to developing thermonuclear weapons. Conducted at the new Pacific Proving Ground, on islands of the Enewetak Atoll, all of the devices were mounted in large steel towers, to simulate air bursts. This series of nuclear weapons tests was preceded by Operation Ranger and succeeded by Operation Buster-Jangle. 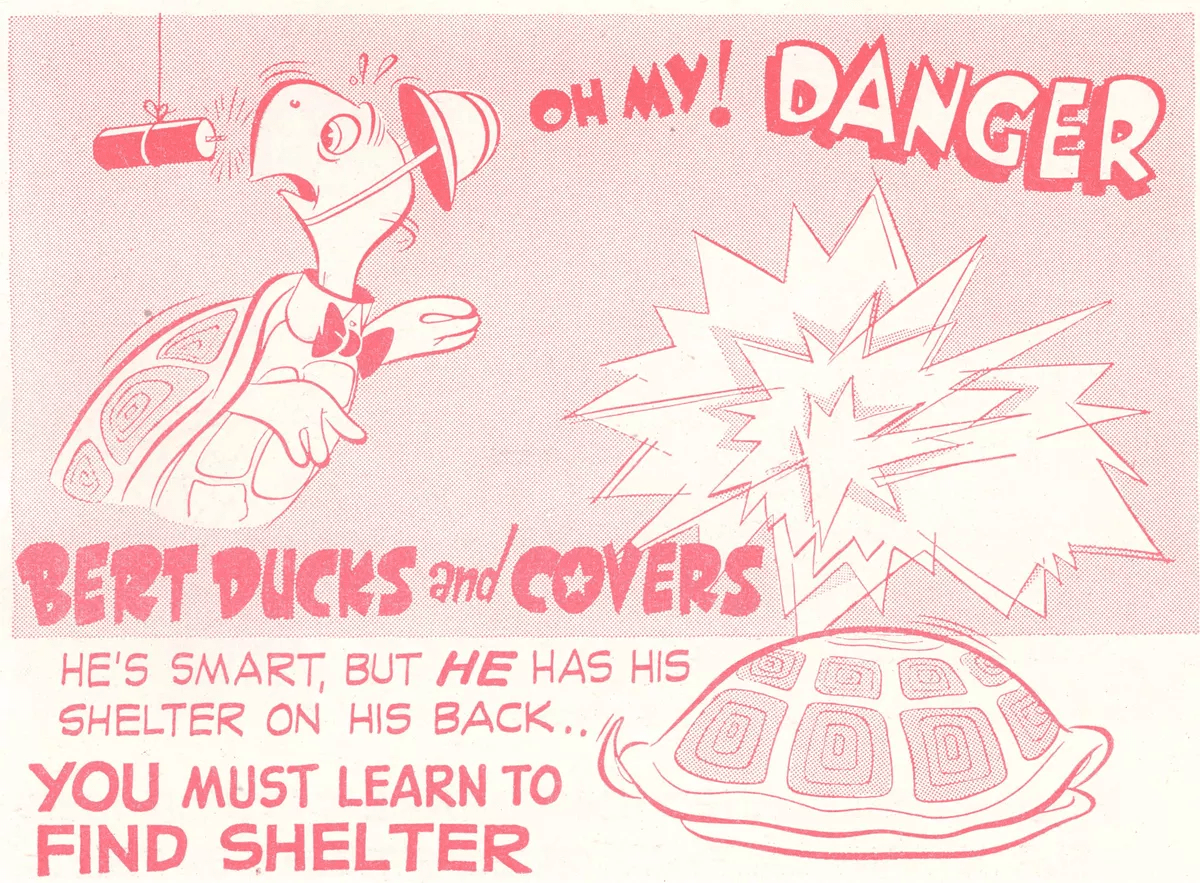 Duck and Cover is a 1952 civil defense animated live-action social guidance film that is often popularly mischaracterized as propaganda. 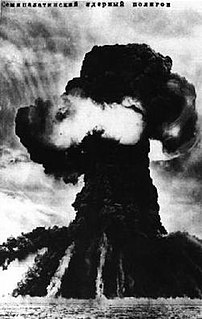 Chagan (Чага́н) was a Soviet underground nuclear test conducted at the Semipalatinsk Test Site on January 15, 1965.

Jack W. Aeby was an American environmental physicist most famous for having taken the only well-exposed color photograph of the first detonation of a nuclear weapon on July 16, 1945 at the Trinity nuclear test site in New Mexico. 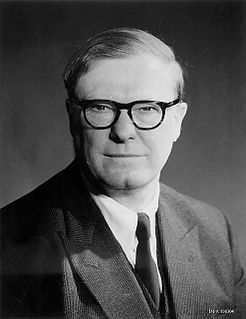 William George Penney, Baron Penney, was an English mathematician and professor of mathematical physics at the Imperial College London and later the rector of Imperial College. He had a leading role in the development of Britain's nuclear programme, a clandestine programme started in 1942 during World War II which produced the first British atomic bomb in 1952.

High-altitude nuclear explosions are the result of nuclear weapons testing within the upper layers of the Earth's atmosphere and in outer space. Several such tests were performed at high altitudes by the United States and the Soviet Union between 1958 and 1962. 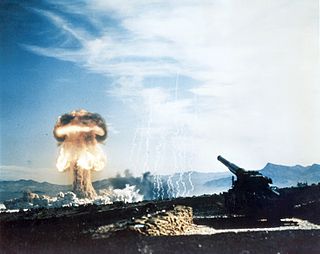 Upshot–Knothole Grable was a nuclear weapons test conducted by the United States as part of Operation Upshot–Knothole. Detonation of the associated nuclear weapon occurred 19 seconds after its deployment at 8:30am PDT on May 25, 1953, in Area 5 of the Nevada Test Site. The codename Grable was chosen because the letter Grable is phonetic for G, as in "gun", since the warhead was a gun-type fission weapon. As a shell, or artillery-fired atomic projectile (AFAP), the device was the first of its kind. The test remains the only nuclear artillery shell ever actually fired in the U.S. nuclear weapons test program.

The National Museum of Nuclear Science & History is a national repository of nuclear science information chartered by the 102nd United States Congress under Public Law 102-190, and located in unincorporated Bernalillo County, New Mexico, with an Albuquerque postal address. It is adjacent to both the Albuquerque city limits and Kirtland Air Force Base. 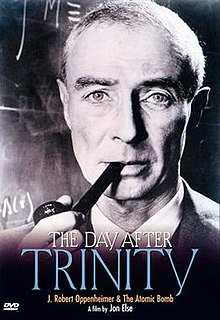 The Day After Trinity is a 1980 documentary film directed and produced by Jon H. Else in association with KTEH public television in San Jose, California. The film tells the story of J. Robert Oppenheimer (1904–1967), the theoretical physicist who led the effort to build the first atomic bomb, tested in July 1945 at Trinity site in New Mexico. Featuring candid interviews with several Manhattan Project scientists, as well as newly declassified archival footage, The Day After Trinity was nominated for an Academy Award for Best Documentary Feature of 1980, and received a Peabody Award in 1981.

How to Photograph an Atomic Bomb is a history and photography book written by Peter Kuran and published in 2006 by VCE. 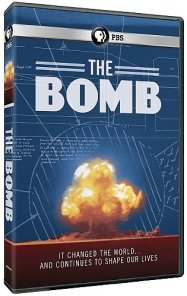 The Bomb is a 2015 American documentary film about the history of nuclear weapons, from theoretical scientific considerations at the very beginning, to their first use on August 6, 1945, to their global political implications in the present day. The two-hour PBS film was written and directed by Rushmore DeNooyer, who noted the project took a year and a half to complete, since much of the film footage and images was only recently declassified by the United States Department of Defense. According to DeNooyer, “It wouldn’t take very many bombs to really change life on Earth, ... The idea that there are thousands of them sitting around is pretty scary. I don’t think people today realize that. They don’t think about it. I don’t think they are scared. But in a way, they should be.” Mark Dawidziak, of the Cleveland Plain Dealer, summarized the film as follows: "The Bomb moves swiftly to cover Hiroshima and Nagasaki, the Cold War, the arms race, the Red Scare, the witch hunt, the Cuban Missile Crisis, test-ban treaties, the "Star Wars" initiative, the anti-nuke movement, the collapse of the Soviet Union and the rise of new nuclear threats." According to historian Richard Rhodes, “The invention [of 'The Bomb'] was a millennial change in human history: for the first time, we were now capable of our own destruction, as a species.”