Tristaniopsis collina, known as hill water gum or hill kanuka, is a tree of eastern Australia.

The natural range of T. collina is from near Mount Gulaga (36° S) in the south of New South Wales to the border with the state of Queensland at the McPherson Range (28° S). The usual habitat is rainforest away from streams on shallow soils at high altitude. However, it can occasionally be seen at low altitudes such as at Seal Rocks and Chatswood West. T. collina is remarkably similar to the related T. laurina (Water Gum), but the latter species is strictly riparian.

Tristaniopsis collina is a small to medium tree, up to 35 m (115 ft) in height and up to 75 cm (30 in) in trunk diameter. The trunk is irregular, not cylindrical. The bark is grey or creamy, very thin, with papery fibres that come off to touch. Branchlets are coloured purple and angular in cross section. The alternate simple leaves are around 5 to 8 cm (2 to 3 in) long, with a long thin tip, and numerous oil dots of varying sizes. The midrib is sunken on the top surface, but raised below.

Yellow flowers form in cymes from November to January. The fruit is a dry capsule maturing from April to July. The fruit is practically identical to that of T. laurina. The winged seeds are 5 mm (0.2 in) long and 2 mm (0.08 in) broad.

Eupomatia laurina, commonly named bolwarra or sometimes native guava or copper laurel, is a species of shrubs to small trees, of the Australian continent ancient plant family Eupomatiaceae. They often grow between 3 and 5 m tall, larger specimens may attain 15 m (50 ft) and a trunk diameter of 30 cm (12 in). They grow naturally in eastern Australia and New Guinea. In Australia, they grow as far south as Nowa Nowa in the humid forests of the warm temperate east of the state of Victoria through eastern New South Wales and Queensland north to tropical Cape York Peninsula. They are one of the ancient lineages of flowering plants, usually growing as part of an understorey in rainforests or humid Eucalypt forests.

Kanuka may refer to:

Tristaniopsis laurina, the water gum or kanooka, is a tree species native to Australia. It usually grows near the eastern coastline and along the banks of streams, where the trunks and branches tend to be shaped in the direction of the current and give an indication of the flood height. 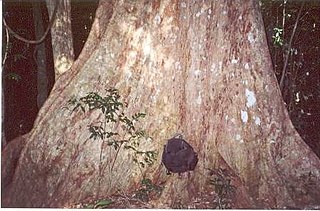 Syzygium francisii is a native Australian tree, common on the eastern sea board, between Morisset, New South Wales and Gladstone, Queensland. Common names include giant water gum, rose satinash, and Francis water gum. The habitat of Syzygium francisii is rainforest on basaltic or fertile alluvial soils. 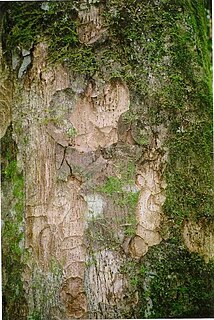 Litsea reticulata is a common Australian tree, growing from near Milton, New South Wales to the Bunya Mountains, Queensland. Common names include bollygum, bolly wood and brown beech. The habitat of the bollygum is rainforest of most types, except the dryer forms. 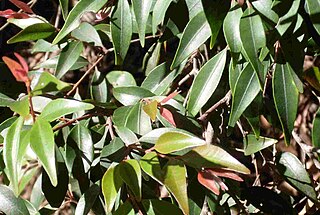 Uromyrtus australis, commonly known as the peach myrtle, is a small tree growing around Nightcap National Park, New South Wales, Australia. It is endangered by extinction. The delicate foliage, pink flowers and appealing fruit makes this a particularly beautiful tree. 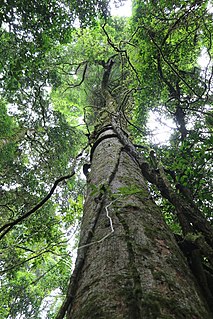 Beilschmiedia obtusifolia is a rainforest laurel indigenous to eastern Australia. It ranges, roughly, from the Manning River in New South Wales to the Daintree River in Queensland, within tropical and sub tropical rainforests, usually on the more fertile basaltic sites, but sometimes close to the sea. Its common names include blush walnut, hard bolly gum, and nut wood. 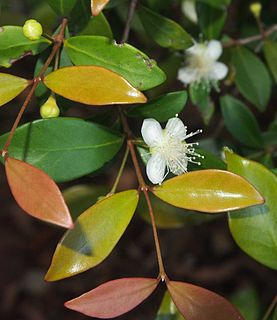 Gossia bidwillii, known as the python tree is a rainforest myrtle of eastern Australia. The usual habitat is the drier rainforest areas. The range of natural distribution is from the Hunter River in New South Wales to Coen in far northern Queensland. 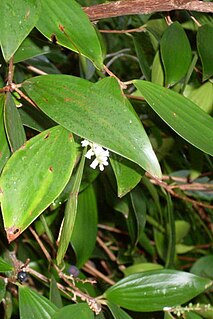 Trochocarpa laurina is an Australian shrub or small tree. It occurs from near Bermagui in southern coastal New South Wales to the Wet Tropics in Queensland. It grows at the summit of Mount Bellenden Ker, which has an average annual rainfall of 8312 mm. The minimum annual rainfall requirement is 1200 mm.

Stenocarpus salignus, known as the scrub beefwood is an Australian rainforest tree in the family Proteaceae. Found in warmer rainforests on the coast and ranges. It is often found in warm temperate rainforest on poorer sedimentary soils, or on volcanic soils above 750 metres above sea level. It was originally described by the botanist Robert Brown in 1810.

Hedycarya angustifolia, also known as the native mulberry or Australian mulberry, is a rainforest plant of south and eastern Australia. Its habitat is cool gullies and moist temperate forests, often at high altitude. Occasionally it is seen bordering sclerophyll forests.

Polyosma cunninghamii, known as the featherwood, is a small rainforest tree of eastern Australia. It grows in many different types of rainforest, however seldom found in the drier rainforests. It is often seen in the cooler rainforests at high altitude. The range of natural distribution is from Kioloa near Batemans Bay in southern New South Wales, to Maleny in south eastern Queensland. 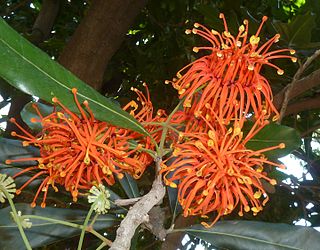 Stenocarpus sinuatus, known as the firewheel tree, is an Australian rainforest tree in the Protea family. The range of natural distribution is in various rainforest types from the Nambucca River in New South Wales to the Atherton Tableland in tropical Queensland. Stenocarpus sinuatus is widely planted as an ornamental tree in other parts of Australia and in different parts of the world.

Bedfordia arborescens, known as the blanket leaf, is a shrub or small tree of south eastern Australia. It occurs in or around temperate rainforests in areas of high altitude. The natural range of distribution on the mainland is from the Otway Ranges and Wilsons Promontory in the far south east of the Australian continent to Monga National Park near Braidwood, New South Wales. There is also an isolated occurrence in Tasmania on Cape Barren Island. Other common names are blanket bush, flannel leaf and tree blanketleaf. 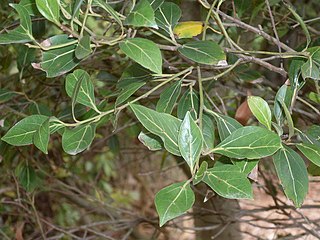 Cryptocarya foveolata, known as the mountain walnut is a rainforest tree growing at high altitude in eastern Australia. Despite the common name, it belongs to the laurel family. 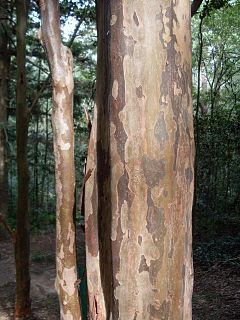 Backhousia subargentea is a rare Australian rainforest tree, growing near Mullumbimby in north eastern New South Wales and from Boonah to Imbil in south eastern Queensland.

Croton verreauxii known as the green native cascarilla is a small tree or shrub growing in dry rainforest and rainforest margins in eastern Australia.

Trochocarpa montana, the mountain tree heath, is an Australian shrub or small tree. It occurs at high altitude from the Barrington Tops to the Dorrigo region of northern New South Wales.

Pittosporum lancifolium, known as the narrow-leaved orange thorn or sticky orange thorn, is a shrub or tree growing in eastern Australia. Often found at altitudes above 500 metres above sea level; from Mallanganee National Park in New South Wales in the south to Yarraman in south east Queensland in the north.