It lives throughout the North Island and the top half of the South Island down to Christchurch. It often lives inside houses and is seen sunning itself on walls, fences and garden plants. [2]

Jumping spiders or the Salticidae are a family of spiders. As of 2019, it contained over 600 described genera and over 6000 described species, making it the largest family of spiders at 13% of all species. Jumping spiders have some of the best vision among arthropods and use it in courtship, hunting, and navigation. Although they normally move unobtrusively and fairly slowly, most species are capable of very agile jumps, notably when hunting, but sometimes in response to sudden threats or crossing long gaps. Both their book lungs and tracheal system are well-developed, and they use both systems. Jumping spiders are generally recognized by their eye pattern. All jumping spiders have four pairs of eyes, with the anterior median pair being particularly large.

Portia is a genus of jumping spider that feeds on other spiders. They are remarkable for their intelligent hunting behaviour, which suggests that they are capable of learning and problem solving, traits normally attributed to much larger animals. 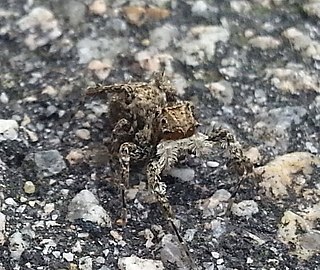 Portia labiata is a jumping spider found in Sri Lanka, India, southern China, Burma (Myanmar), Malaysia, Singapore, Java, Sumatra and the Philippines. In this medium-sized jumping spider, the front part is orange-brown and the back part is brownish. The conspicuous main eyes provide vision more acute than a cat's during the day and 10 times more acute than a dragonfly's, and this is essential in P. labiata′s navigation, hunting and mating. 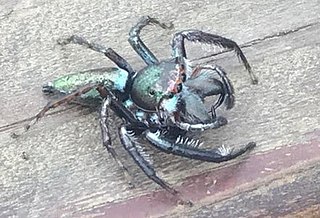 Ascyltus are a genus of jumping spiders in the family Salticidae that was first described by Ferdinand Anton Franz Karsch in 1878. As of December 2020, the genus contained 10 species. Ascyltus spiders utilize their vision in courtship, hunting, and navigation. They are typically large to medium sized salticids and often move relatively slowly. However, they are capable of agile jumps when moving, hunting, or to avoid predators. They have well developed book lungs and tracheal systems, and they are capable of utilizing both systems. Ascyltus have four pairs of eyes, with the anterior median pair being the most prominent. One distinguishable characteristic of the genus is their antero-lateral carapace, which is iridescently colored.

Clynotis is a genus of spiders in the family Salticidae, or jumping spiders, contained within the subfamily Marpissinae. They are found across Australia and New Zealand, with some species occupying the Auckland Islands and one found exclusively on Snares Island. There are eight species currently described within the genus, the earliest noted being the type species Clynotis severus, first described in Queensland, New South Wales, Australia in 1879 by Ludwig Carl Christian Koch. The most recent was described in 1931 by Lucien Berland. Two other species previously held within the genus were subsequently reclassified into the genus Tara. 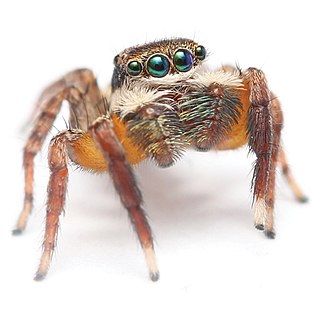 Jotus is a spider genus of the family Salticidae, native to Australia, New Zealand, and Indonesia. There are thought to be many as yet undescribed species in southern Australia.

Laufeia is a spider genus of the jumping spider family, Salticidae, with a mainly Asian distribution, where they are found on tree trunks and branches or among leaf litter.

Margaromma is a spider genus of the jumping spider family, Salticidae. The eight described species occur mostly in Australia and New Zealand, with several other species on Pacific islands. One species is found in Cameroon.

Omoedus is a genus of jumping spiders.

Paraphilaeus is a genus of the jumping spiders found in Queensland and New South Wales. It contains only one species, Paraphilaeus daemeli. Though it has been known for a long time, in 2003, closer investigation showed that it represents a new genus and is neither related to Plexippus nor Trite. The genus name is derived from Ancient Greek para "alongside" and the salticid genus Philaeus. 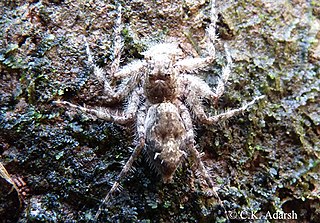 Phaeacius is a spider genus of the family Salticidae, found in sub-tropical China and between India and the Malay Peninsula, including Sri Lanka, Sumatra and the Philippines. Although other spiders can jump, salticids including Phaeacius have significantly better vision than other spiders, and their main eyes are more acute in daylight than a cat's and 10 times more acute than a dragonfly's. The main eyes focus accurately on an object at distances from approximately 2 centimetres (0.79 in) to infinity, and in practice can see up to about 75 centimetres (30 in). They do not spin webs.

Trite is a genus of jumping spiders first described by Eugène Simon in 1885. Most of the 18 described species occur in Australia and New Zealand, with several spread over islands of Oceania, one species even reaching Rapa in French Polynesia.

New Zealand has 1134 described spider species, with an estimated total fauna of 2000 species. Over 90 per cent are endemic, and the rest have been introduced through human activities or were natural wind-borne introductions.

Barbara Maria Patoleta is a Polish arachnologist who specialises in the taxonomy, evolution and zoogeography of jumping spiders in the Pacific Islands.

Lyssomanes viridis, commonly known as the magnolia green jumper, is a species of jumping spider of the genus Lyssomanes, for which it is the type species. The species is native to the United States, being found in much of the Southeastern United States and Texas. It has also been reported from parts of Mexico, with sightings as far south as Guatemala and as far north as Delaware.

Trite simoni is a jumping spider species in the genus Trite. It was first identified in 2014 by Polish arachnologist Barbara Maria Patoleta.

Trite guilberti is a jumping spider species in the genus Trite. The male was first identified in 2014 by Barbara Maria Patoleta.

Trite caledoniensis is a jumping spider species in the genus Trite. The male was first identified in 2014 by Barbara Maria Patoleta.