Trithuria inconspicua is a small aquatic herb of the family Hydatellaceae that is only found in New Zealand. [3] [4]

Trithuria inconspicua is a small (~4 cm) fresh water lily endemic to New Zealand. This lily grows in 5–7 meters of water and is restricted to the fresh water lakes of Northland and Fiordland regions of the North and South Island, respectively. Consisting of multiple 20–40 mm small tussocks and fibrous roots the plant is often partially buried under sediment or algae with only the leaf tips exposed. [1] As the plant is Monoicous individual male and female flowers are found on the same plant, however, in nature plants containing flowers of both sexes are rare. [5] The male flowers consist of bright red 10 mm long filaments, whilst the female flowers are yellow-brown and contain 5-10 styles bunched at the apex. [1]

Based on molecular data from a single plastid gene (rbcL)T. inconspicua was originally believed to a monocot. [6] However, a more recent study using multiple genetic loci, supported by a subsequent re-evaluation of morphological characteristics, now places T. inconspicua as a sister group with the water lilies (Nymphaeales). [7] This new placement of T. inconspicua means only a single lineage of flowering plant is thought to be older, that being the woody New Caledonian shrub Amborella trichopoda . [8]

The predominant view that Amborella represents the oldest flowering plant was recently challenged in a study by Goremykini et al (2013), [9] who showed that when highly variable sites were removed from the dataset, T. inconspicua was consistently identified as the oldest angiosperm lineage. This proposal has attracted criticism from Drew et al (2014), who argued that the basal placement of T. inconspicua is an artifact of the variable site filtering method used by Goremykini et al (2013). [10] One of the main reasons why people are interested in this question is that placing T. inconspicua at the base of the angiosperm lineage would suggest the first angiosperms were soft bodied aquatic plants, rather than a woody terrestrial plants like Amborella . These competing theories have been given the light hearted monikers "wet and wild" and "dark and disturbed". [10] [11] [12]

Trithuria inconspicua is seriously threatened [1] due to the competition by the introduced bladder wort ( Utricularia gibba ) as well as other fresh water weeds.

Flowering plants are plants that bear flowers and fruits, and form the clade Angiospermae, commonly called angiosperms. The term "angiosperm" is derived from the Greek words angeion and sperma ('seed'), and refers to those plants that produce their seeds enclosed within a fruit. They are the most diverse group of land plants with 64 orders, 416 families, approximately 13,000 known genera and 300,000 known species. Angiosperms were formerly called Magnoliophyta. 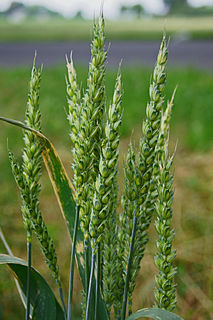 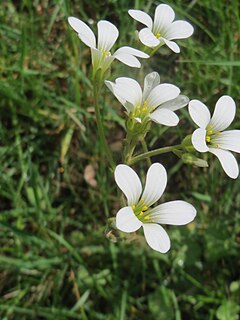 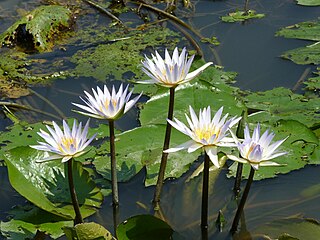 Nymphaeaceae is a family of flowering plants, commonly called water lilies. They live as rhizomatous aquatic herbs in temperate and tropical climates around the world. The family contains five genera with about 70 known species. Water lilies are rooted in soil in bodies of water, with leaves and flowers floating on or emergent from the surface. Leaves are round, with a radial notch in Nymphaea and Nuphar, but fully circular in Victoria and Euryale.

Amborella is a monotypic genus of understory shrubs or small trees endemic to the main island, Grande Terre, of New Caledonia. The genus is the only member of the family Amborellaceae and the order Amborellales and contains a single species, Amborella trichopoda. Amborella is of great interest to plant systematists because molecular phylogenetic analyses consistently place it as the sister group to all other flowering plants.

The Embryophyta, or land plants, are the most familiar group of green plants that comprise vegetation on Earth. Embryophyta is a clade within the Phragmoplastophyta, a larger clade that also includes several groups of green algae including the Charophyceae and Coleochaetales. Within this larger clade the embryophytes are sister to the Zygnematophyceae/Mesotaeniaceae and consist of the bryophytes plus the polysporangiophytes. Living embryophytes therefore include hornworts, liverworts, mosses, lycophytes, ferns, gymnosperms and flowering plants.The land plants have diplobiontic life cycles and is shown that the Charophycean green algae gave rise to land plants.

The Limnanthaceae are a small family of annual herbs occurring throughout temperate North America. There are eight species and nineteen taxa currently recognized. Members of this family are prominent in vernal pool communities of California. Some taxa have been domesticated for use as an oil seed crop. Some members are listed as threatened or endangered and have been the focus of disputes over development plans

The Cabombaceae are a family of aquatic, herbaceous flowering plants. A common name for its species is water shield. The family is recognised as distinct in the Angiosperm Phylogeny Group IV system (2016). The family consists of two genera of aquatic plants, Brasenia and Cabomba, totalling six species.

Hydnoroideae is a subfamily of parasitic flowering plants in the order Piperales. Traditionally, and as recently as the APG III system it given family rank under the name Hydnoraceae. It is now submerged in the Aristolochiaceae. It contains two genera, Hydnora and Prosopanche:

Hydatellaceae are a family of small, aquatic flowering plants. The family consists of tiny, relatively simple, plants occurring in Australasia and India. It was formerly considered to be related to the grasses and sedges, but has been reassigned to the order Nymphaeales as a result of DNA and morphological analyses showing that it represents one of the earliest groups to split off in flowering-plant phylogeny, rather than having a close relationship to monocots, which it bears a superficial resemblance to due to convergent evolution. The family includes only the genus Trithuria, which has at least 13 species, although species diversity in the family has probably been substantially underestimated.

Huerteales is the botanical name for an order of flowering plants. It is one of the 17 orders that make up the large eudicot group known as the rosids in the APG III system of plant classification. Within the rosids, it is one of the orders in Malvidae, a group formerly known as eurosids II and now known informally as the malvids. This is true whether Malvidae is circumscribed broadly to include eight orders as in APG III, or more narrowly to include only four orders. Huerteales consists of four small families, Petenaeaceae, Gerrardinaceae, Tapisciaceae, and Dipentodontaceae.

Trithuria is a genus of small aquatic herb, which represent the only members of the family Hydatellaceae found in India, Australia, and New Zealand. Most of the 12 formally characterised species of Trithuria are found in Australia, with the exception of T. inconspicua and T. konkanensis, which are found in New Zealand and India, respectively. Until genetic testing proved otherwise, these plants were believed to be Monocots related to the grasses (Poaceae). They are unique in being the only plants besides Lacandonia schizmatica and L. braziliana in which the stamens are in the center of the flower while the pistels are circled in a ring around them. 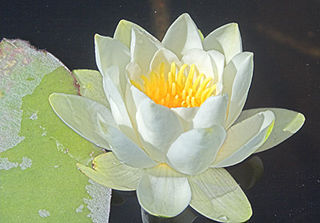 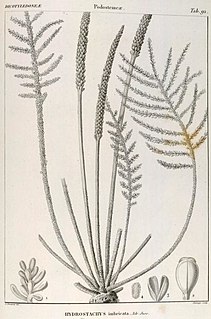 Hydrostachys is a genus of about 22 species of flowering plants native to Madagascar and southern and central Africa. It is the only genus in the family Hydrostachyaceae. All species of Hydrostachys are aquatic, growing on rocks in fast-moving water. They have tuberous roots, usually pinnately compound leaves, and highly reduced flowers on dense spikes.