USS Point Cruz (CVE-119) was a Commencement Bay-class escort carrier of the United States Navy. Originally named Trocadero Bay until 5 June 1944 when it was renamed after the Honiara suburb Point Cruz, [ citation needed ] which was an important location during the Guadalcanal Campaign. She was laid down on 4 December 1944 by Todd-Pacific Shipyards Incorporated, Tacoma, Washington; launched on 18 May 1945, sponsored by Mrs. Earl R. DeLong; and commissioned on 16 October 1945, with Captain Douglas T. Day in command.

Following acceptance and shakedown, she conducted pilot qualifications off the West Coast from October 1945 to March 1946. Thereafter she ferried aircraft to forward bases in WestPac. (Captain Donald S. McMahan took command 27 November 1946, serving until 22 April 1947 when he was replaced by Commander William A. Smyth.) She entered Puget Sound Naval Shipyard on 3 March 1947 for inactivation; was decommissioned on 30 June 1947 and entered the Pacific Reserve Fleet, Bremerton, Washington.

After the start of hostilities in Korea the ship was activated and recommissioned on 26 July 1951, with Captain Horace Butterfield in command. (He was replaced by Captain J.W. Davison in December 1951, and Captain C.C. Marcy became commanding officer in November 1952.) Point Cruz departed Bremerton on 4 January 1953 after coastal operations and an extensive overhaul modifying her for use as an anti-submarine warfare Hunter-Killer Group carrier. During the transit to San Diego, Point Cruz was damaged in a severe Pacific storm and repairs required several months.

Based at Sasebo, Japan, Point Cruz patrolled the Korean coast in the spring of 1953.(Captain John T. Hayward took command in July 1953.) After the armistice, she served as base for a helicopter squadron that took part in "Operation Platform", airlifting Indian troops to the Panmunjom buffer zone to supervise the prisoner of war exchange. (The incident on which the television movie A Thousand Men and a Baby was based took place during Operation Platform.)

The CVE returned to San Diego in late December 1953, and after training and additional overhaul deployed to WestPac again on April 1954, under the command of Captain John T. Hayward. Captain Frederick J. Brush assumed command of the ship in May 1954. In the Far East the carrier served as command ship for Carrier Division 17 under Rear Admiral James S. Russell.

The ship returned to San Diego in November 1954, and deployed again on 24 August 1955 (shortly after Captain Brush was relieved by Captain A.R. Matter) .While in the Pacific operating with the 7th Fleet, she served as flagship of Carrier Division 15. Point Cruz departed Yokosuka on 31 January 1956 and arrived at Long Beach, California, in early February for inactivation at Puget Sound Naval Shipyard. Decommissioned on 31 August 1956, CVE-119 was placed in the Bremerton Group of the Pacific Reserve Fleet. While in a reserve status, she was redesignated an aircraft transport, AKV-19, on 17 May 1957.

Point Cruz was reactivated on 23 August 1965 and placed under the operational control of the Military Sea Transportation Service (MSTS) as USNS Point Cruz (T-AKV-19) in September 1965. Commencing service as an aircraft ferry for MSTS, Point Cruz provided logistical support for American forces in South East Asia.

USS Badoeng Strait (CVE-116) was a Commencement Bay-class escort carrier of the United States Navy during the Korean War.

USS Rabaul (CVE/CVHE/AKV-21) was a Commencement Bay-class escort carrier of the United States Navy. She was delivered on 30 August 1946, but never commissioned. After spending 26 years in reserve, she was scrapped in 1973. 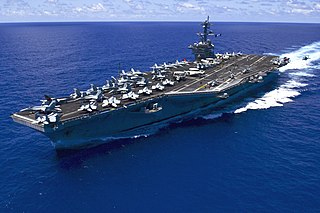 USS Carl Vinson (CVN-70) is the United States Navy's third Nimitz-class supercarrier. She is named for Carl Vinson, a Congressman from Georgia, in recognition of his contributions to the U.S. Navy. The ship was launched in 1980, undertook her maiden voyage in 1983, and underwent refueling and overhaul between 2005 and 2009. Carl Vinson's call sign is "Gold Eagle".

USS Arnold J. Isbell (DD-869), a Gearing-class destroyer, was the only ship of the United States Navy to be named for Arnold J. Isbell, an aircraft carrier captain during World War II.

USS Wright (CVL-49) was a Saipan-class light aircraft carrier of the U.S. Navy, later converted to the command ship CC-2. It is the second ship named "Wright". The first Wright (AV-1) was named for Orville Wright; the second honored both Wright brothers: Orville and Wilbur.

USS Tinian (CVE-123) was a Commencement Bay-class escort carrier of the United States Navy. Ordered and constructed during World War II, Tinian never entered active service and was assigned to the Pacific Reserve Fleet after being completed. In June 1955, the ship was reclassified a helicopter carrier and in May 1959, a cargo ship and aircraft ferry. The ship remained in reserve for her entire career and was struck from the Naval Vessel Register on 1 June 1970 and sold for scrap.

USS Mindoro (CVE-120) was a Commencement Bay-class escort carrier launched during World War II, but was completed too late to see active service. After service in the Caribbean, Atlantic and the Mediterranean during the early Cold War, the carrier was stricken from the Navy List on 1 December 1959 and scrapped. 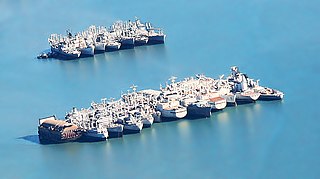 The United States Navy maintains a number of its ships as part of a reserve fleet, often called the "Mothball Fleet". While the details of the maintenance activity have changed several times, the basics are constant: keep the ships afloat and sufficiently working as to be reactivated quickly in an emergency.

USS Commencement Bay (CVE-105), the lead ship of her class, was an escort carrier and later helicopter carrier of the United States Navy, used mostly as a training ship.

USS Vermillion Bay (CVE-108) was an Commencement Bay-class escort carrier of the United States Navy. She was renamed Kula Gulf on 6 November 1943; laid down by Todd-Pacific Shipyards, Inc., Tacoma, Wash. on 16 December 1943; launched on 15 August 1944; sponsored by Miss Dorothy Mott; completed by Willamette Iron & Steel Corp., Portland, Oregon; and commissioned at Portland on 12 May 1945, Captain J. W. King in command.

USS Siboney (CVE-112/AKV-12) was a Commencement Bay-class escort carrier of the United States Navy. She was the second ship named for Siboney, Cuba, the Cuban Village near which troops of Theodore Roosevelt's Rough Riders fought during the Spanish–American War.

USS Hollandia (CVE-97) was a Casablanca-class escort carrier of the United States Navy. She was named after the Battle of Hollandia, a successful amphibious operation during the New Guinea campaign. Launched in April 1944, and commissioned in June, she served in support of the Battle of Okinawa. Postwar, she participated in Operation Magic Carpet. She was decommissioned in January 1947, when she was mothballed in the Pacific Reserve Fleet. Ultimately, she was sold for scrapping in December 1960.

USS Gilmore (DE-18) was an Evarts-class short-hull destroyer escort in the service of the United States Navy, named after Commander Walter William Gilmore, Supply Corps, killed on 8 May 1942 while serving as the supply officer of the Lexington (CV-2) in the Battle of Coral Sea.

Rear Admiral William Francis Petrovic was a preeminent naval engineer and ship builder in the United States Navy, serving from 1935 to 1972. 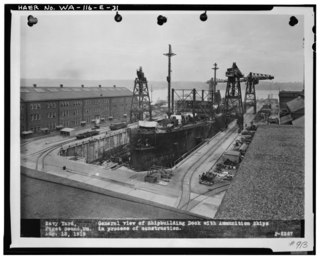 Puget Sound Naval Shipyard is a large military-industrial complex located in Bremerton, Washington along the north shore of Sinclair Inlet, which opens to Puget Sound. This large shipyard is 1.5 miles (2.4 km) in length along the shore and over a half-mile in width at its greatest distance across. The shipyard has nearly 1,000 facilities such as shipfitters shops, repair shops, drydocks, piers, cranes, crane rails, railways, and tunnels. In addition to the industrial facilities, supporting structures include: residences for officers and enlisted personnel, recreation facilities, boiler, electrical substations, fuel tanks, medical facilities, and canteens. The historic district is just over a tenth of the entire shipyard, 189 acres of the shipyard's 1,347 acres. Its greatest significance was during the Second World War when it repaired large warships damaged in the Pacific theater. It was designated a National Historic Landmark District in 1992.