Under Secretary of the Treasury for Terrorism and Financial Intelligence

The current Under Secretary is Sigal Mandelker, appointed by President Donald Trump, and confirmed to the position by the Senate on June 21, 2017. [1]

The Under Secretary heads the Office of Terrorism and Financial Intelligence (TFI), created under 31 USC 312, when the administration of President George W. Bush announced, on May 8, 2004, that the Executive Office of Terrorist Financing and Financial Crimes (TFFC), the Financial Crimes Enforcement Network (FinCEN), the Office of Foreign Assets Control (OFAC), and allocated resources from the Treasury Department would be brought under the new office's control. The Under Secretary for Terrorism and Financial Intelligence also possesses oversight of the Office of Intelligence and Analysis, created under 31 USC 311, [one of sixteen agencies in the United States Intelligence Community per 50 USC 3003]. [2] The Federal Reserve remains outside the jurisdiction of this office, and cannot be investigated by it.[ citation needed ]

Several of these agencies are now non-existent or have been moved into other federal departments. The Bureau of Alcohol, Tobacco, and Firearms was split into two separate bureaus, with one handling certain law enforcement aspects and the other handling tax collection aspects. The former was moved into the United States Department of Justice, while the latter was kept within the Department of the Treasury. [5] The U.S. Secret Service and the Federal Law Enforcement Training Center are now within the Department of Homeland Security. [6] [7] The U.S. Customs Service was moved into the Department of Homeland Security when it became part of the U.S. Customs and Border Protection. [8] However, under the Homeland Security Act of 2002 [9] Custom Service's "revenue functions" were retained by Treasury. This includes, among others, Customs duties, enforcing trade agreements, and counterfeit trademark detection and seizure. [10]

Former Under Secretaries include Jimmy Gurule, [3] James Johnson, [11] Raymond Kelly, [12] Ronald Noble, [13] Stuart A. Levey, and David Cohen. Adam Szubin was appointed Under Secretary under the Obama administration but was never confirmed by the Senate. 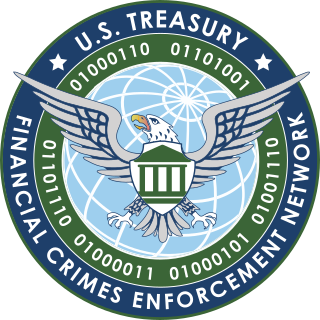 Financial intelligence (FININT) is the gathering of information about the financial affairs of entities of interest, to understand their nature and capabilities, and predict their intentions. Generally the term applies in the context of law enforcement and related activities. One of the main purposes of financial intelligence is to identify financial transactions that may involve tax evasion, money laundering or some other criminal activity. FININT may also be involved in identifying financing of criminal and terrorist organisations. Financial intelligence can be broken down into two main areas, collection and analysis. Collection is normally done by a government agency, known as a financial intelligence organisation or Financial Intelligence Unit (FIU). The agency will collect raw transactional information and Suspicious activity reports (SAR) usually provided by banks and other entities as part of regulatory requirements. Data may be shared with other countries through intergovernmental networks. Analysis, may consist of scrutinizing a large volume of transactional data using data mining or data-matching techniques to identify persons potentially engaged in a particular activity. SARs can also be scrutinized and linked with other data to try to identify specific activity.

James F. Sloan was an American intelligence official who served as the Assistant Commandant for Intelligence and Criminal Investigations for the United States Coast Guard and head of Coast Guard Intelligence from November 17, 2003 to February 27, 2009. He was responsible for directing, coordinating, and overseeing intelligence and investigative operations and activities that support all U.S. Coast Guard mission objectives, the national strategy for Homeland Security, and National Security objectives.

Operation Green Quest was a U.S. interagency investigative unit formed in October 2001 after the September 11 attacks. Sponsored by the United States Customs Service, it was concerned with the surveillance and interdiction of terrorist financing sources. It was disbanded in June 2003 pursuant to an agreement between the Department of Homeland Security and the Department of Justice.

Jimmy Gurulé is an American attorney, academic and government official, who is a Professor at Notre Dame Law School, teaching criminal law courses. He was the first Hispanic Assistant Attorney General in the United States.

David Aufhauser served as the General Counsel of the United States Treasury Department from 2001 to 2004. After 9/11, Aufhauser was a key player in disrupting and freezing further terrorist activity against the United States. He is best known for running the federal government's programs to go after terrorist financing, a major strategy in the war on terror. He ran the National Security Council Committee on Terrorist Financing; oversaw the legal departments of important agencies and divisions within the U.S. Treasury Department including International Banking, Domestic Banking, the U.S. Customs Service, IRS criminal and civil divisions, ATF, Financial Crimes and Money Laundering, and United States Secret Service; and supervised the federal government's multi-agency antiterrorism task force. In his numerous briefings before the House and Senate, he emphasized the importance of teaching tolerance and respect, often making clear distinctions between the vast majority of peaceful people in the Middle East and the practitioners of “counterfeit religion” who prayed on hopelessness to recruit terrorists. Sigal P. Mandelker is an American lawyer and government official who currently serves as Under Secretary of the Treasury for Terrorism and Financial Intelligence. In October 2019, she announced plans to step down from the position to pursue opportunities in the private sector. 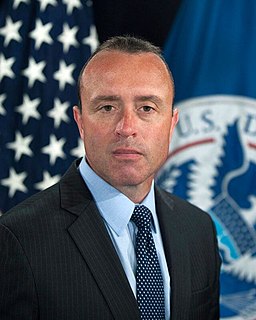 David J. Glawe was the Under Secretary of Homeland Security for Intelligence from January 2017 to May 2020 and is currently the President and CEO of the National Insurance Crime Bureau.

James A. "Jim" Dinkins is an American law enforcement officer and business executive who served as the first head of Homeland Security Investigations for U.S. Immigration and Customs Enforcement from 2010 to 2014. He is a senior vice president and director of operations of Enterprise Financial Crimes Compliance for U.S. Bancorp.