The hospital is on the south side of Euston Road and its tower faces Euston Square tube station on the east side. Warren Street tube station lies immediately west and the major Euston terminus station is beyond 200 metres east, just beyond Euston Square Gardens.

In 1826 the London University began emphasising the importance of having medical schools attached to hospitals. Before the hospital opened, only Oxford and Cambridge universities offered medical degrees, and as a consequence relatively few doctors actually had degrees. [2] The hospital was founded as the North London Hospital in 1834 in order to provide clinical training for the "medical classes" of the university, after a refusal by the governors of the Middlesex Hospital to allow students access to that hospital's wards. [3] It soon became known as University College Hospital. [3]

In 1835, Robert Liston became the first professor of clinical surgery at UCH, [4] [5] and the first major operation under ether in Europe was conducted at the hospital by Liston on 21 December 1846. [3] UCH was split from UCL in 1905, and a new hospital building designed by Alfred Waterhouse, known as the Cruciform Building, was opened in 1906 on Gower Street. UCH merged with the National Dental Hospital in 1914, and the Royal Ear Hospital in 1920. [3]

George Orwell married Sonia Brownell in 1949, and later died 21 January 1950, in room 65 of the hospital. [6] The hospital was run by the Camden and Islington Area Health Authority [7] from 1974. In 1994, UCH became part of the University College London Hospitals NHS Trust. [3] The hospital site at the Cruciform Building was closed in 1995, despite strikes and an occupation in 1993. [8] The building was purchased by UCL, for use as the home for the Wolfson Institute for Biomedical Research and the teaching facility for UCL bioscience and medical students UCL Medical School. [9]

A new 75,822 m2 hospital, procured under the Private Finance Initiative in 2000, designed by Llewelyn Davies Yeang [10] and built by a joint venture of AMEC and Balfour Beatty at a cost of £422 million, opened in 2005. [11] [12] The sculpture Monolith and Shadow made from a large polished piece of Brazilian granite was placed outside the main entrance to the new hospital in 2005. [13]

In October 2006, the hospital was nominated and made the Building Design shortlist for the inaugural Carbuncle Cup, awarded to "the ugliest building in the United Kingdom completed in the last 12 months", [14] which was ultimately awarded to Drake Circus Shopping Centre in Plymouth. [15] Facilities management services are provided by Interserve. [1]

In November 2008, the £70 million Elizabeth Garrett Anderson Wing was opened, allowing the hospital to offer all women's health services in one place (except some breast and gynaecology services). [16]

As of 2015 [update] the following services were provided at the hospital: [17]

The hospital has 665 in-patient beds, 12 operating theatres and houses the largest single critical care unit in the NHS. [1] [17] The Accident and Emergency department sees approximately 120,000 patients a year. [18] It is a major teaching hospital and a key location for the UCL Medical School. [19] It is also a major centre for medical research and part of both the UCLH/UCL Biomedical Research Centre and the UCL Partners academic health science centre. [20] [21]

The urology department moved to University College Hospital at Westmoreland Street, formerly the Heart Hospital, in 2015. [22] [23]

Middlesex Hospital was a teaching hospital located in the Fitzrovia area of London, England. First opened as the Middlesex Infirmary in 1745 on Windmill Street, it was moved in 1757 to Mortimer Street where it remained until it was finally closed in 2005. Its staff and services were transferred to various sites within the University College London Hospitals NHS Trust. The Middlesex Hospital Medical School, with a history dating back to 1746, merged with the medical school of University College London in 1987. 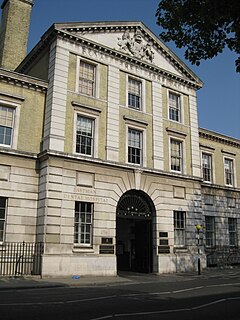 The Eastman Dental Hospital was based on Gray's Inn Road until it co-located with the University College London ear, nose, throat, balance and hearing services on Huntley Street, London as the Royal National ENT and Eastman Dental Hospitals in October 2019. The hospital continues to provide specialist dental treatment as well as ear, nose, throat, hearing, speech and balance services and is part of the University College London Hospitals NHS Foundation Trust.

The UCLH/UCL Biomedical Research Centre is a biomedical research centre based in London. It is a partnership between University College London Hospitals NHS Foundation Trust (UCLH), University College London (UCL) and the National Institute for Health and Care Research (NIHR) and was one of the original five Comprehensive Biomedical Research Centres established by the NIHR in April 2007.

The UCL Institute of Ophthalmology is an institute within the Faculty of Brain Sciences of University College London (UCL) and is based in London, United Kingdom. The institute conducts research and post-graduate teaching in the area of ophthalmology.

The Royal London Hospital for Integrated Medicine is a specialist alternative medicine hospital located in London, England and a part of University College London Hospitals NHS Foundation Trust. It is the largest public sector provider of complementary medicine in Europe. It is based in the Bloomsbury area of Central London, adjacent to Great Ormond Street Hospital. 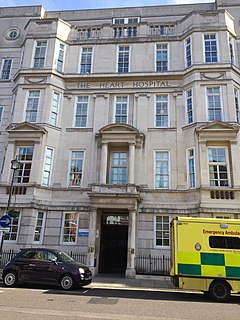 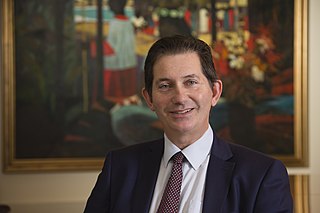 Ian Jacobs is an academic, medical doctor, gynaecological oncologist, charity founder and university leader from the UK, with dual British and Australian citizenship.

Ramani Moonesinghe OBE MD(Res) FRCP FRCA FFICM is Professor of Perioperative Medicine at University College London (UCL) and a Consultant in Anaesthetics and Critical Care Medicine at UCL Hospitals. Moonesinghe is Director of the National Institute for Academic Anaesthesia (NIAA) Health Services Research Centre and between 2016 and 2019 was Associate National Clinical Director for Elective Care for NHS England. In 2020 on she took on the role of National Clinical Director for Critical and Perioperative care at NHS England and NHS Improvement.

University College Hospital is a teaching hospital in London, England.

Martin Neil Rossor, is a British clinical neurologist with a specialty interest in degenerative dementias and familial disease.

Alan J. Thompson, MD, FMedSci, FRCP, FRCPI, is Dean of the Faculty of Brain Sciences at UCL; Pro-Provost for London at UCL; Garfield Weston Professor of Clinical Neurology and Neurorehabilitation at the UCL Queen Square Institute of Neurology. He is also a consultant neurologist at the University College London NHS Hospitals Foundation Trust working at the National Hospital for Neurology and Neurosurgery. He is Editor-in-Chief for Multiple Sclerosis Journal.

Rachel Louise Batterham is a British physician who is a professor of Obesity, Diabetes and Endocrinology at University College London. She established the University College London Hospitals NHS Foundation Trust Bariatric Centre for Weight Management and Metabolic Surgery. She has extensively studied obesity, and has contributed to clinical management and the understanding of obesity-related diseases.