Gower Street is a two-way street in Bloomsbury, central London, running from Euston Road at the north to Montague Place in the south. The street is continued from North Gower Street north of the Euston Road. To the south it becomes Bloomsbury Street.

Euston Square Underground station is located at the north end of Gower Street, at the corner of Euston Road.

Notable residents of Gower Street are listed in the Survey of London. [2] They have included the architect George Dance the Younger, painter William De Morgan, [3] and the Shaws. John Shaw Sr., and John Shaw Jr., formed a famous 19th century architectural partnership. Thomas Budd Shaw was a professor of English literature to the grand dukes of Russia.

The painter John Everett Millais had a studio here.[ citation needed ] North Gower Street was also the birthplace and childhood home of the artist Philip Zec and his eleven other siblings, although that was when it was still called George Street.

In March 1837, Giuseppe Mazzini (Italian politician, journalist and activist for the unification of Italy) moved to 187 North Gower Street (at the time, 9 George Street, and now used for the filming of Sherlock ) together with Italian poet and patriot Giovanni Ruffini, his brother Agostino Ruffini and Angelo Usiglio, living there for three years until 1840.

On 29 December 1838, Charles Darwin took the let of the furnished property at 12 Upper Gower Street (later 110 Gower Street), and wrote to tell his fiancée Emma Wedgwood of his delight at being the "possessor of Macaw Cottage". [4] As their daughter Etty later recalled, "He used to laugh over the ugliness of their house in Gower St, and the furniture in the drawing-room, which he said combined all the colours of the macaw in hideous discord", [5] and Darwin had christened the house "Macaw Cottage" in "allusion to the gaudy colours of the walls and furniture." [6] He moved in on 31 December, and with Emma moved in on the day of their marriage, 29 January 1839. The development of Darwin's theory of natural selection made progress in this house, and their children William Erasmus Darwin and Anne Darwin were born there. In 1842 the family moved to Down House in the Kent countryside, and the Gower Street house became part of the warehouse system of James Shoolbred and Company. On 13 December 1904 a London County Council blue plaque was put up, to "Charles Darwin Naturalist". The house suffered from bomb damage in 1941 during the Blitz, and was not repaired. In 1961 the site became part of the Biological Sciences building of University College London, with a new plaque. The long thin garden which backed on to Gower Mews North (later Malet Place) was incorporated into Foster Court car park in 1978. [7]

The etymologist and philologist Hensleigh Wedgwood, who was Charles Darwin's cousin and brother-in-law, lived at 94 Gower Street; he died there in 1891. [8]

From 1869 to 1892, 102 Gower Street was the home of the barrister William Belt who was best known for his erratic behaviour in later life which was widely reported by popular newspapapers for the amusement of their readers.

On the wall of the University College building, an elaborate wall plaque carries the legend: "Close to this place Richard Trevithick (Born 1771 - Died 1833) Pioneer of High Pressure Steam ran in the year 1808 the first steam locomotive to draw passengers." It was erected by "The Trevithick Centenary Memorial Committee". [9]

In 1823 Charles Dickens (aged 11) lived at 4 Gower Street North when his mother opened a school there. The building was later re-numbered 147 Gower Street; the site was occupied from 2005 by the Accident and Emergency department of University College Hospital.

The Pre-Raphaelite Brotherhood was founded in the Millais family house on Gower Street in the winter of 1848–49.[ citation needed ]

Millicent Fawcett, a leading figure in the constitutional wing of the British women's suffrage movement, lived at No. 2 Gower Street (and died there in 1929).

From 1976 until 1995 the headquarters of MI5 were an anonymous grey office block at 140 Gower Street, adjacent to the Euston Road. [10] [11] Since 2004 the site has been occupied by the western end of the Wellcome Trust's Gibbs Building.

Many of the Georgian houses on Gower Street have been converted into small hotels.

North Gower Street, the northern continuation of Gower Street beyond Euston Road, is not accessible from Gower Street at street level for vehicles or pedestrians. For pedestrians, the most direct access is via a subway along the concourse of Euston Square station.

From Euston Road, North Gower Street continues past Drummond Street and then ends, with a footpath continuing north to connect with the Hampstead Road. It is lined mostly with Georgian terraced houses now mostly converted into hotels and student accommodation or rebuilt, and council housing.

The BBC crime drama Sherlock has used 187 North Gower Street, posing as 221B Baker Street, for many external shots of Sherlock Holmes's flat. The location is instantly recognisable by the adjacent Speedy's cafe and sandwich shop which is also shown in most external shots in the series. The blue plaque for former resident Giuseppe Mazzini, clearly visible on Google Street View, is covered by a fake lamp for filming. 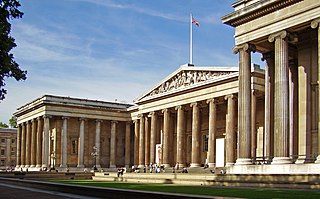 Bloomsbury is a district in the West End of London. It is considered a fashionable residential area, and is the location of numerous cultural, intellectual, and educational institutions.

Euston Road is a road in Central London that runs from Marylebone Road to King's Cross. The route is part of the London Inner Ring Road and forms part of the London congestion charge zone boundary. It is named after Euston Hall, the family seat of the Dukes of Grafton, who had become major property owners in the area during the mid-19th century.

Somers Town is an inner-city district in North West London. It has been strongly influenced by the three mainline north London railway termini: Euston (1838), St Pancras (1868) and King's Cross (1852), together with the Midland Railway Somers Town Goods Depot (1887) next to St Pancras, where the British Library now stands. 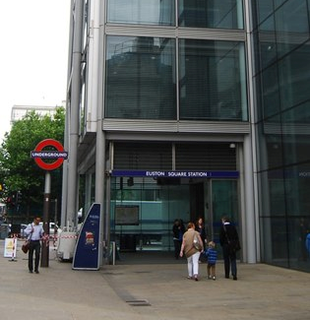 Euston Square is a London Underground station at the corner of Euston Road and Gower Street, just north of University College London – its main entrance faces the tower of University College Hospital. The multi-interchange Euston station is beyond Euston Square Gardens, which is one street east. The station is between Great Portland Street and King's Cross St Pancras on the Circle, Hammersmith & City and Metropolitan lines in Travelcard Zone 1.

Emma Darwin was an English woman who was the wife and first cousin of Charles Darwin. They were married on 29 January 1839 and were the parents of ten children, seven of whom survived to adulthood.

Henrietta Emma Litchfield was a daughter of Charles Darwin and his wife Emma Wedgwood.

The Darwin–Wedgwood family are members of two connected families, each noted for particular prominent 18th-century figures: Erasmus Darwin, a physician and natural philosopher, and Josiah Wedgwood, a noted potter and founder of the eponymous Wedgwood and Sons pottery company. The Darwin and Wedgwood families were on friendly terms for much of their history and members intermarried, notably Charles Darwin, who married Emma Wedgwood.

Josiah Wedgwood II, the son of the English potter Josiah Wedgwood, continued his father's firm and was a Member of Parliament (MP) for Stoke-upon-Trent from 1832 to 1835. He was an abolitionist, and detested slavery.

The inception of Darwin's theory occurred during an intensively busy period which began when Charles Darwin returned from the survey voyage of the Beagle, with his reputation as a fossil collector and geologist already established. He was given an allowance from his father to become a gentleman naturalist rather than a clergyman, and his first tasks were to find suitable experts to describe his collections, write out his Journal and Remarks, and present papers on his findings to the Geological Society of London.

Euston Square is a large square in the London Borough of Camden in Central London. It lies on Euston Road, and Euston railway station and Euston bus station are on its northernmost side. Although “Euston Square” strictly refers to the square, in day to day use the name is often used to refer to Euston Square tube station, whose entrance is at the junction of Euston Road and North Gower Street. The southern half of the square was built over in the 1920s, leaving Euston Square Gardens on the north side in front of Euston station.

Erasmus Alvey Darwin, nicknamed Eras or Ras, was the older brother of Charles Darwin, born five years earlier. They were brought up at the family home, The Mount House, Shrewsbury, Shropshire, England. He was the only other son besides Charles, the fourth of six children of Susannah and Robert Darwin, and the grandson of Erasmus Darwin and of Josiah Wedgwood, a family of the Unitarian church. He was a member of the semi-secretive Cambridge Apostles society, a debating club largely reserved for the brightest students.

Hensleigh Wedgwood was a British etymologist, philologist and barrister, author of A Dictionary of English Etymology. He was a cousin of Charles Darwin, whom his sister Emma married in 1839.

Frances Julia Wedgwood, also known as Florence Dawson, was an English feminist whose writing spanned philosophy, fiction, biography, history, religious studies and literary criticism. She was described as "a young woman of extreme passions and fastidious principles" and "at once a powerful reasoner and an inexorable critic of reason".

Chenies Street is a street in Bloomsbury, London, that runs between Tottenham Court Road and Gower Street. It is the location of a number of notable buildings such as Minerva House, the Drill Hall, and a memorial to The Rangers, 12th County of London Regiment. North Crescent starts and ends on the northern side of Chenies Street.

This is a list of the etymology of street names in the area of Regent's Park in London ; the area has no formal boundaries, though it generally thought to be delimited by Prince Albert Road to the north, Park Village East and Hampstead Road/the Euston railway line/Eversholt Street to the east, Euston Road and Marylebone Road to the south and Park Road and Baker Street to the west,