Upverter is an EDA system delivered in a web-browser which enables hardware engineers to design, share, and review schematics and printed circuit boards. It additionally features the ability to generate a bill of materials, Gerber files, and a 3D rendering. Upverter provides web-based tools for editing schematic diagrams and for laying out printed-circuit boards. It does not require payment for open-source projects.

The company was incubated through Y Combinator's startup program in 2011. [1] In September 2013, SparkFun Electronics released their open source design library on the platform. [2] [3]

In August 2017, Upverter was acquired by Altium, and was offered as a free-to-use product. [6] Altium announced on May 14, 2018 that CircuitMaker, Altium's free maker-oriented design tool and associated web content, would become part of the Upverter product, [7] with CircuitMaker forming the desktop client for offline editing, and Upverter.com forming both the browser based design editor along with content community and library. [8] However, in a blog post on May 11, 2019, Altium COO Ted Pawela stated that the plans had evolved, and the products would remain separate, with interoperability features for the design files. [9]

The company was recognized as Canada's Top 10 Up-and-Coming technology company by PwC in November 2014, [10] and Top 20 Hottest Innovative Company by the Canadian Innovation Exchange in 2013. [11]

Upverter was also selected as the 2013 PCB Design Tools Winner by DesignVision. [12]

Mentor is a US-based electronic design automation (EDA) multinational corporation for electrical engineering and electronics, headquartered in Wilsonville, Oregon. The company was founded in 1981 by Tom Bruggere.

Electronic design automation (EDA), also referred to as electronic computer-aided design (ECAD), is a category of software tools for designing electronic systems such as integrated circuits and printed circuit boards. The tools work together in a design flow that chip designers use to design and analyze entire semiconductor chips. Since a modern semiconductor chip can have billions of components, EDA tools are essential for their design; this article in particular describes EDA specifically with respect to integrated circuits (ICs). 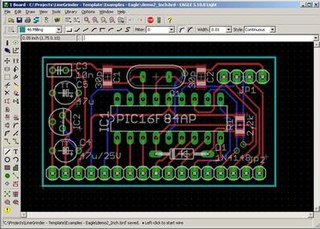 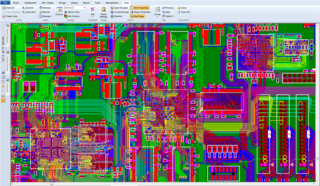 TARGET 3001! is a CAD computer program for EDA and PCB design, developed by Ing.-Büro Friedrich in Germany. It supports the design of electronic schematics, PCBs, and device front panels. It runs under Windows and is available in English, German and French. 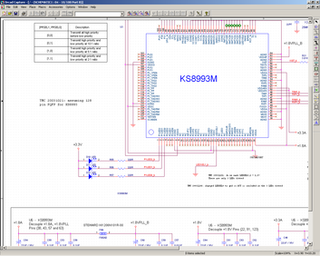 OrCAD Systems Corporation was a software company that made OrCAD, a proprietary software tool suite used primarily for electronic design automation (EDA). The software is used mainly by electronic design engineers and electronic technicians to create electronic schematics, perform mixed-signal simulation and electronic prints for manufacturing printed circuit boards. OrCAD was taken over by Cadence Design Systems in 1999 and was integrated with Cadence Allegro since 2005. 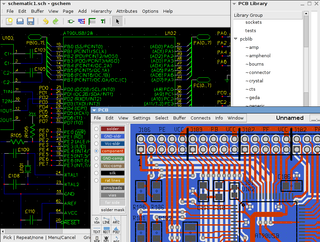 Zuken Inc. is a Japanese multinational corporation, specializing in software and consulting services for end-to-end electrical and electronic engineering. Zuken came into existence as a pioneer in the development of CAD systems in Japan to contribute to electronics manufacturing. The literal translation of Zuken is "graphics laboratory." Established in 1976 in Yokohama, Japan, it is listed on the Tokyo Stock Exchange; net sales amounted to US$216 million for the year 2011.

NI Multisim is an electronic schematic capture and simulation program which is part of a suite of circuit design programs, along with NI Ultiboard. Multisim is one of the few circuit design programs to employ the original Berkeley SPICE based software simulation. Multisim was originally created by a company named Electronics Workbench, which is now a division of National Instruments. Multisim includes microcontroller simulation, as well as integrated import and export features to the printed circuit board layout software in the suite, NI Ultiboard.

KiCad is a free software suite for electronic design automation (EDA). It facilitates the design of schematics for electronic circuits and their conversion to PCB designs. KiCad was originally developed by Jean-Pierre Charras. It features an integrated environment for schematic capture and PCB layout design. Tools exist within the package to create a bill of materials, artwork, Gerber files, and 3D views of the PCB and its components.

DesignSpark PCB is a free electronic design automation software package for printed circuit boards. Although there is no charge for the software, the user must register with the website to unlock the program and it displays advertisements which must be acknowledged before the user can begin working.

Pulsonix is an electronic design automation (EDA) software suite for schematic capture and PCB design. It is produced by WestDev, which is headquartered in Gloucestershire, England, with additional sales and distribution offices overseas. It was first released in 2001, and runs on Windows.

CircuitMaker is electronic design automation software application for printed circuit board designs targeted at the hobby, hacker, and maker community. CircuitMaker is available as freeware, and the hardware designed with it may be used for commercial and non-commercial purposes without limitations. It is currently available publicly as version 1.3 by Altium Limited, with the first non-beta release on January 17, 2016.

EasyEDA is a web-based EDA tool suite that enables hardware engineers to design, simulate, share - publicly and privately - and discuss schematics, simulations and printed circuit boards. Other features include the creation of a bill of materials, Gerber files and pick and place files and documentary outputs in PDF, PNG and SVG formats. 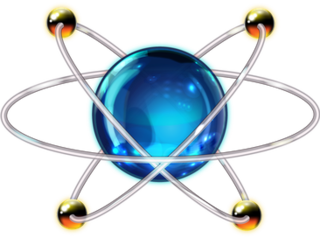