Weinmannia is a genus of trees and shrubs in the family Cunoniaceae. It is the largest genus of the family with about 150 species. It is also the most widespread genus, occurring in Central and South America including the Caribbean, Madagascar and surrounding islands, Malesia and the islands of the South Pacific. It is absent from mainland Africa and Australia, but some fossils have been attributed to Weinmannia in Australia. [1] Leaves are simple or pinnate, with a margin usually toothed, and interpetiolar stipules. Flowers are bisexual, white, arranged in racemes. The fruit is a capsule opening vertically from the top to the base. Seeds hairy without wings.

Cunoniaceae is a family of 27 genera and about 300 species of woody plants in the order Oxalidales, mostly found in the tropical and wet temperate regions of the Southern Hemisphere. The greatest diversity of genera are in Australia and Tasmania, New Guinea, and New Caledonia. The family is also present in Central America, South America, the Caribbean, Malesia, the island of the South Pacific, Madagascar and surrounding islands. the family is absent from mainland Asia except from Peninsular Malaysia, and almost absent from mainland Africa apart from two species from Southern Africa. Several of the genera have remarkable disjunct ranges, found on more than one continent, e.g. Cunonia, EucryphiaWeinmannia sect. Weinmannia.

Madagascar, officially the Republic of Madagascar, and previously known as the Malagasy Republic, is an island country in the Indian Ocean, approximately 400 kilometres off the coast of East Africa. At 592,800 square kilometres (228,900 sq mi) Madagascar is the world's 2nd largest island country. The nation comprises the island of Madagascar and numerous smaller peripheral islands. Following the prehistoric breakup of the supercontinent Gondwana, Madagascar split from the Indian subcontinent around 88 million years ago, allowing native plants and animals to evolve in relative isolation. Consequently, Madagascar is a biodiversity hotspot; over 90% of its wildlife is found nowhere else on Earth. The island's diverse ecosystems and unique wildlife are threatened by the encroachment of the rapidly growing human population and other environmental threats.

The genus has been divided into five sections: [2]

Weinmannia exigua is a species of plant in the family Cunoniaceae. It is endemic to Fiji. This scarce shrub or small tree occurs in an area with a high risk of fires.

Weinmannia fraxinea is a tree in the family Cunoniaceae. It grows up to 40 metres (130 ft) tall. The bark is grey to dark brown. Inflorescences bear up to three pairs of flowers. The specific epithet fraxinea is from the Latin meaning "ash tree", referring to the leaves' resemblance to those of the genus Fraxinus. In Malaysia's Sarawak state the leaves are used to make a dye. The tree grows in a wide variety of habitats from sea-level to 2,000 metres (6,600 ft) altitude. W. fraxinea is found widely in Malesia.

Weinmannia richii is a species of plant in the family Cunoniaceae. It is endemic to Fiji.

Weinmannia rutenbergii is a species of plant in the family Cunoniaceae endemic to Madagascar. The species is common and has a widespread distribution. It can be found from sea level to the summits at Marojejy National Park. The species does best in open, disturbed habitat, particularly on roadsides and areas recently burned. The species exhibits high morphological plasticity, ranging from being shrub-like with small leaves at high altitudes to being a large canopy tree with large leaves in lowland areas.

Weinmannia affinis is a species of plant in the family Cunoniaceae. It is endemic to Fiji.

Weinmannia ouaiemensis is a species of plant in the family Cunoniaceae. It is endemic to New Caledonia.

Weinmannia racemosa, commonly called kāmahi, is an evergreen small shrub to medium-sized tree of the family Cunoniaceae. It is the most abundant forest tree in New Zealand, occurring in lowland, montane, and subalpine forests and shrubland from the central North Island south to Stewart Island.

Bauhinia is a genus of more than 500 species of flowering plants in the subfamily Cercidoideae and tribe Bauhinieae, in the large flowering plant family Fabaceae, with a pantropical distribution. The genus was named after the Bauhin brothers Gaspard and Johann, Swiss-French botanists.

Canarium is a genus of about 100 species of tropical and subtropical trees, in the family Burseraceae. They grow naturally across tropical Africa, south and southeast Asia, Indochina, Malesia, Australia and western Pacific Islands; including from southern Nigeria east to Madagascar, Mauritius, Sri Lanka and India; from Burma, Malaysia and Thailand through the Malay Peninsula and Vietnam to south China, Taiwan and the Philippines; through Borneo, Indonesia, Timor and New Guinea, through to the Solomon Islands, New Caledonia, Fiji, Samoa, Tonga and Palau.

Vismia is a genus of flowering plants in the family Hypericaceae. Members of the genus are small trees and shrubs found in tropical and subtropical areas of Africa, Central America, and South America. 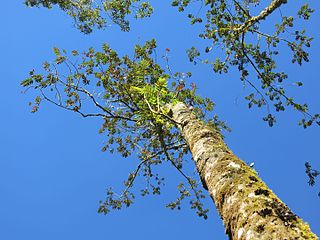 Brunellia is a genus of trees. They are distributed in the mountainous regions of southern Mexico, Central America, West Indies, and South America. Brunellia is the only genus in the family Brunelliaceae. As of 2001 there were about 54 species.

Geissois is a genus of trees and shrubs in the plant family Cunoniaceae. It includes about 19 species mostly found in New Caledonia, but also in Fiji, Vanuatu, and the Solomon Islands. Leaves are opposite, palmate with 3-9 leaflets, with entire margin and intrapetiolar stipules. The inflorescences are simple racemes and bottle-brush like. The flowers have four red sepals, lacking petals, with many long red stamens. The fruit is a capsule, the seeds flat and winged. The genus includes several nickel hyperaccumulator and one aluminum hyperaccumulator, Geissois polyphylla.

Pancheria is a genus of shrubs and trees in the family Cunoniaceae. It is to endemic to New Caledonia and contains 27 species. Leaves or whorled, simple or pinnate. The flowers are arranged in capitula, fruits are follicular. The species are dioecious. The genus is well diversified on ultramafic rocks and some species are nickel hyperaccumulators. It is related to Cunonia and Weinmannia. It was named after Jean Armand Isidore Pancher.

Picramnia, the bitterbushes, is a genus of plant considered to be in the family Picramniaceae, but sometimes placed in Simaroubaceae. The name is conserved against the genera Pseudo-brasiliumAdans., and TaririAubl., both which have been rejected. 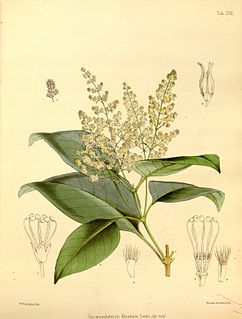 Spiraeanthemum is a genus of trees and shrubs in the family Cunoniaceae. it includes about 19 species from Australia, New Guinea, Solomon Islands, New Caledonia, Vanuatu, Fiji and Samoa. Leaves are simple, opposite or whorled, with toothed or entire margins. Inflorescences are paniculate, flowers unisexual or hermaphrodite, and the fruits are follicular with free carpels. It belongs to the tribe Spiraeanthemeae, and now includes the species formerly placed in Acsmithia.

Tournefortia, commonly known as soldierbush, is a genus of flowering plants in the borage family, Boraginaceae.

Ruurd Dirk Hoogland was a Dutch-born explorer and naturalist, who migrated to Australia and made numerous botanical expeditions to New Guinea, Oceania and Europe. He was an expert on the family Cunoniaceae.