Statistics of Veikkausliiga in the 1997 season.

It was contested by 10 teams, and HJK Helsinki won the championship.

Víctor Arturo Coello Paz is a Honduran footballer who plays as goalkeeper for Juticalpa in the Honduran Second Division.

Rio Branco Football Club, usually known simply as Rio Branco, is a Brazilian football club based in the city of Rio Branco in the Acre state of Brazil.

The Wales women's national football team represents Wales in international women's football. They have yet to qualify for the final stages of the World Cup or European Championships and are currently ranked 35th in the world and 20th in Europe. The team is run by the Welsh FA. 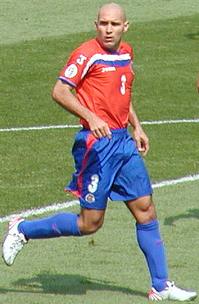 Luis Antonio Marín Murillo is a retired professional Costa Rican footballer and former national captain. He is currently the manager of San Carlos.

Beijing Sinobo Guoan F.C. is a professional Chinese football club that currently participates in the Chinese Super League under licence from the Chinese Football Association (CFA). The team is based in the Chaoyang District in Beijing and their home stadium is the Workers' Stadium with a seating capacity of 66,161. Their shareholders are the real estate company Sinobo Group (64%) and CITIC Limited (36%) of CITIC Group, a state-owned enterprise of China. Beijing Guoan F.C. was founded as a professional team by CITIC Guoan Group, which was a subsidiary of CITIC Group until 2014.

Ángel Oswaldo Fernández Vernaza is an Ecuadorian footballer. He played 77 games for the Ecuador national team between 1991 and 2004.

The 1997 Torneo Descentralizado was the 82nd season of the top category of Peruvian football (soccer). It was played by 14 teams. The national champion was Alianza Lima, their first title in 19 years.

Gilles Veissière is a football referee from France, best known for supervising two matches during the 2002 FIFA World Cup in Korea and Japan. He also led two matches at the 2000 and 2004 UEFA European Football Championship, and has refereed numerous UEFA Champions League matches. He was selected for the FIFA Europe vs. Rest of the World match to accompany the World Cup draw in Marseille in 1997.

The FIFA Intercontinental Futsal Cup is the international club championships for futsal. The tournament is similar to FIFA Club World Cup.

The 1996–97 Croatian First Football League was the sixth season of the Croatian top-level football league since its establishment.

The 1997–98 Croatian First Football League was the seventh season of the Croatian top-level football league since its establishment.

The 1997–98 Meistriliiga was the seventh season of the Meistriliiga, Estonia's premier football league. Flora won their third title.

This article is concerned with the Indonesian football results of Liga Indonesia in the season 1996/1997. The season involved with 33 teams, and Persebaya Surabaya won the championship.

In the 1997 season of the Russian Top League, the football team Spartak Moscow successfully defended the championship, winning their fifth Russian title.

The 1997 Finnish Cup was the 43rd season of the main annual association football cup competition in Finland. It was organised as a single-elimination knock–out tournament and participation in the competition was voluntary. The final was held at the Olympic Stadium, Helsinki on 25 October 1997 with FC Haka defeating TPS by 2-1 (aet) before an attendance of 4,107 spectators.