The African and Malagasy Union (AMU) (French : Union Africaine et Malgache (UAM)) was an intergovernmental organization created to promote cooperation among newly independent states in Francophone Africa. The organization derives its name from the name of the continent of Africa and from the former Malagasy Republic, now Madagascar. The organization disbanded in 1985. [1]

The organization was founded on 12 September 1961 in Antananarivo by members of the Brazzaville Group of French-Speaking States developing out of a meeting held in Brazzaville in December 1960. Twelve francophone countries agreed to maintain close relationships but also a special relationship with the former colonial power, France. The original aims were both economic and political: to adopt common stands on international issues, to promote economic and culture cooperation, and to maintain a common defense organization. However, this caused a problem: the organization would have to depend on France. The diversity, geography, and post-colonial problems of the different countries stopped the organization from ever becoming significant. [2]

In March 1964 the UAM changed its name to the Afro-Malagasy Union for Economic Cooperation (Union Africaine et Malgache de Coopération Économique; UAMCE). [3] Moktar Ould Daddah was elected as the president of the organisation while the city of Yaoundé was selected as the headquarters seat. [3] Subsequently, it confined itself to economic affairs and by 1966 had become inactive. [4]

The African and Malagasy Common Organization (Organization Commune Africaine et Malgache; OCAM) was the successor to the UAMCE. It was set up at Nouakchott in February 1965 and comprised the original 12 members of the UAM with the addition of Togo. In May 1965 its membership was increased by the admission of the former Belgian colonies of Congo (Kinshasa) and Rwanda. In June 1965, however, Mauritania withdrew. The remaining 14 then signed the new OCAM charter on 27 June at a meeting in Antananarivo, Madagascar. The aims of the organization were economic, social, technical, and cultural cooperation. OCAM dropped the political and defense objectives that its predecessor, the UAM, had attempted to embrace. It created the structures of an international organization: a Conference of Heads of State and Government, a Council of Ministers, a Secretariat and Secretary-General, and established its headquarters at Bangui in the Central African Republic. It developed a number of joint services and of these the most successful and most well known is the multinational airline Air Afrique. In 1979 the airline was separated from OCAM.

The organization's later history became increasingly troubled. Mauritius joined in 1970. Congo (Kinshasa), by then renamed Zaire, withdrew in 1972; Congo (Brazzaville) in 1973; Cameroon, Chad and Madagascar in 1974; Gabon in 1977. However, some of these countries retained their links with OCAM's various agencies. In 1982 OCAM held a summit at Abidjan, Côte d'Ivoire; it had then changed its name, though only to substitute Mauritius for Madagascar, to Organization Commune Africaine et Mauricienne. OCAM, also, has ceased to operate. [2] The organization officially became extinct in 1985. [1]

The Congo national football team represents the Republic of the Congo in men's association football and is governed by the Congolese Football Federation. They have never qualified for the World Cup, but did win the Africa Cup of Nations in 1972. They also won the All-Africa Games football tournament in 1965. The team is also a member of both FIFA and the Confederation of African Football (CAF). 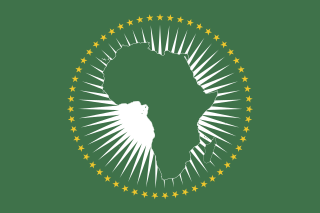 Jacques Foccart was a French businessman and politician, best known as a chief adviser to French presidents on African affairs. He was also a co-founder of the Gaullist Service d'Action Civique (SAC) in 1959 with Charles Pasqua, which specialized in covert operations in Africa. 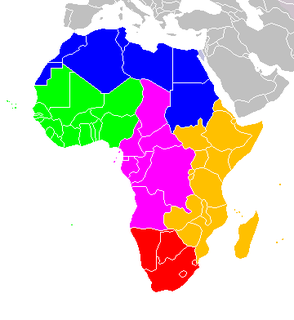 Annuaires Afrique (French), or AfricaPhonebooks (English), is a group of African online telephone directories owned by The Global Super Pages. It currently serves the following areas:

The African Union is a geo-political entity covering the entirety of the African continent. Its origin dates back to the First Congress of Independent African States, held in Accra, Ghana, from 15 to 22 April 1958. The conference aimed at forming the Africa Day to mark the liberation movement, each year, regarding the willingness of the African people to free themselves from foreign dictatorship, as well as subsequent attempts to unite Africa, including the Organisation of African Unity (OAU), which was established on 25 May 1963, and the African Economic Community in 1981. Critics argued that the OAU in particular did little to protect the rights and liberties of African citizens from their own political leaders, often dubbing it the "Dictators' Club".

Ancistrorhynchus is a genus of flowering plants from the orchid family Orchidaceae. It contains 16 species native to tropical Africa.

This page details the qualifying process qualifying for the 1992 African Cup of Nations in Senegal. Senegal, as hosts, and Algeria, as title holders, qualified automatically.

Cuviera is a genus of flowering plants in the family Rubiaceae native to tropical Africa. It was originally described by Augustin Pyramus de Candolle in 1807 and is named after the French naturalist Georges Cuvier.

This page details the qualifying process for the 1988 African Cup of Nations in Morocco. Morocco, as hosts, and Egypt, as title holders, qualified automatically.

This page details the qualifying process for the 1982 African Cup of Nations in Libya. Libya, as hosts, and Nigeria, as title holders, qualified automatically.

Craterispermum is a genus of flowering plants in the family Rubiaceae. It contains 16 species that occur in tropical Africa and Seychelles. It is the only genus in the tribe Craterispermeae, of which the divergence time is estimated at 34.8 million years ago.

This page details the process of qualifying for the 1972 African Cup of Nations.

This page details the process of qualifying for the 1974 African Cup of Nations which was held in Egypt in March 1974. Eight teams qualified for the finals, including Egypt as hosts and Congo as the holders of the title, having won the 1972 tournament in Cameroon.

Club MTV, formerly MTV Dance, is a European pay television music channel from ViacomCBS Networks EMEAA that was separated from the UK channel on 27 May 2014. It broadcasts electronica, dance and r'n'b music programming. The channel is widely available throughout Europe.