The Alamo Cenotaph, also known as The Spirit of Sacrifice, is a monument in San Antonio, Texas, United States, commemorating the Battle of the Alamo of the Texas Revolution, which was fought at the adjacent Alamo Mission. The monument was erected in celebration of the centenary of the battle, and bears the names of those known to have fought there on the Texas side. [2]

Although there had been previous plans for Alamo monuments, starting in the late 1800s, the Alamo Cenotaph was the first such erected in San Antonio. (There had been one previous monument in Austin, but it was lost in a Capitol fire.) During the 1936 Texas Centennial celebration, the state of Texas provided $100,000 for the monument, commissioned from local sculptor Pompeo Coppini. San Antonio mayor Maury Maverick held a dedication ceremony on November 11, 1940.

The shaft rises sixty feet from its base which is forty feet long and twelve feet wide. The monument was erected in grey Georgia marble and pink Texas granite. It was entitled The Spirit of Sacrifice and incorporates images of the Alamo garrison leaders and 187 names of known Alamo defenders, derived from the research of historian Amelia Williams. [3] Later research has shown some listed on the cenotaph were not there, and the total of Alamo combatants has risen with newer research. [4]

The marker on the cenotaph reads:

Erected in memory of the heroes who sacrificed their lives at the Alamo, March 6, 1836, in the defense of Texas. They chose never to surrender nor retreat; these brave hearts, with flag still proudly waving, perished in the flames of immortality that their high sacrifice might lead to the founding of this Texas. [5]

Battle of the Alamo

Main article: Battle of the Alamo

After putting down resistance in other regions of Mexico, in the spring of 1836 Santa Anna led a Mexican army back into Texas and marched on San Antonio, intending to avenge the humiliating defeat of Cos and end the Texian rebellion. Texian leader Sam Houston, believing that San Antonio could not be defended against a determined effort by the regular Mexican army, called for the Texian forces to abandon the city.

A volunteer force under the joint command of William Barrett Travis, newly arrived in Texas, and James Bowie, and including Davy Crockett and his company of Tennesseans, and Juan Seguin's company of Hispanic Texan volunteers occupied and fortified the deserted mission and determined to hold San Antonio against all opposition.

The defenders of the Alamo thus included both Anglo and Hispanic Texans who fought side by side under a banner that was the flag of Mexico with the numerals "1824" superimposed. This was meant to indicate that the defenders were fighting for their rights to democratic government under the Mexican constitution of that year. It was only during the siege that the Texas Congress declared an independent Republic of Texas.

The Battle of the Alamo took place from February 23 to March 6, 1836. At first the battle was primarily a siege marked by artillery duels and small skirmishes. After twelve days Santa Anna, tired of waiting for his heavy artillery and eager for a glorious victory to enhance his reputation, determined to take the Alamo by storm.

Before dawn on March 6, he launched his troops against the walls of the Alamo in three separate attacks. The third attack overwhelmed the defenses of the weak north wall. The defenders retreated to the now famous Long Barracks and the Chapel and fought to the last man. Most historians agree that a few of the defenders were captured but were executed as rebels on the specific orders of Santa Anna. The deaths of these "Martyrs to Texas Independence" inspired greater resistance to Santa Anna's regime, and the cry "Remember the Alamo" became the rallying point of the Texas Revolution.

In 1982, Ozzy Osbourne, while wearing his future wife's dress because she had hidden his clothes, drunkenly urinated on the Alamo Cenotaph, which is across the street from the actual building. A police officer arrested him, and Osbourne was subsequently banned from performing in San Antonio for a decade. [6]

The Alamo Mission in San Antonio, commonly called The Alamo and originally known as the Misión San Antonio de Valero, is a historic Spanish mission and fortress compound founded in the 18th century by Roman Catholic missionaries in what is now San Antonio, Texas, United States. It was the site of the Battle of the Alamo in 1836. Today it is a museum in the Alamo Plaza Historic District and a part of the San Antonio Missions World Heritage Site. 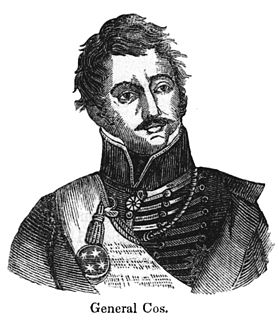 Martín Perfecto de Cos was a Mexican Army general and politician during the mid-19th century. Born in Veracruz, the son of an attorney, he became an army cadet at the age of 20, a lieutenant in 1821, and a brigadier general in 1833. 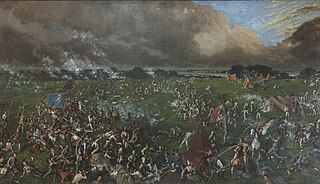 The Battle of San Jacinto, fought on April 21, 1836, in present-day Houston, Texas, was the decisive battle of the Texas Revolution. Led by General Samuel Houston, the Texan Army engaged and defeated General Antonio López de Santa Anna's Mexican army in a fight that lasted just 18 minutes. A detailed, first-hand account of the battle was written by General Houston from the headquarters of the Texan Army, San Jacinto, on April 25, 1836. Numerous secondary analyses and interpretations have followed. 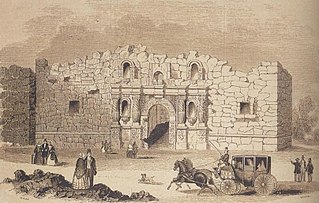 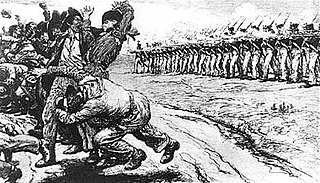 The Goliad massacre was an event of the Texas Revolution that occurred on March 27, 1836, following the Battle of Coleto; 425–445 prisoners of war from the Texian Army of the Republic of Texas were killed by the Mexican Army in the town of Goliad, Texas. Among those killed was commander Colonel James Fannin. The killing was carried out under orders from General and President of Mexico Antonio Lopez de Santa Anna. Despite the appeals for clemency by General José de Urrea, the massacre was reluctantly carried out by Lt. Colonel José Nicolás de la Portilla. 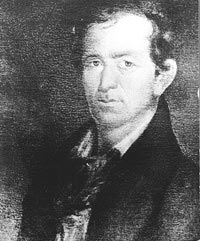 Erastus "Deaf" Smith was an American frontiersman noted for his part in the Texas Revolution and the Army of the Republic of Texas. He fought in the Grass Fight and the Battle of San Jacinto. After the war, Deaf Smith led a company of Texas Rangers. 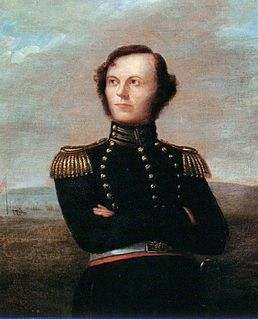 The Battle of Coleto, also known as the Battle of Coleto Creek, the Battle of the Prairie, and the Batalla del encinal del Perdido, was fought on March 19–20, 1836, during the Goliad campaign of the Texas Revolution. In February, General José de Urrea led a branch of the Mexican army up the Gulf Coast of Mexican Texas toward Goliad, where a large contingent of soldiers from the Texian Army were garrisoned under Colonel James W. Fannin. Simultaneously, Mexican president Antonio Lopez de Santa Anna led a larger force into the Texian interior, where on March 6 his troops won the Battle of the Alamo. After learning of the Alamo's defeat, Texian general Sam Houston ordered Fannin to retreat from Goliad and join the rest of the army in Victoria. 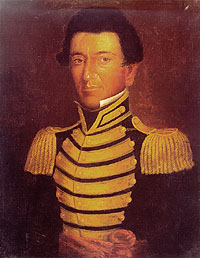 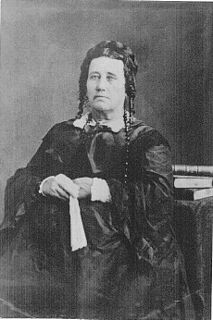 Susanna Wilkerson Dickinson and her infant daughter, Angelina, were among the few American survivors of 1836 Battle of the Alamo during the Texas Revolution. Her husband, Almaron Dickinson, and 185 other Texian defenders were killed by the Mexican Army.

The Immortal 32 was a relief force of thirty-two Texian Militia from the Gonzales Ranging Company who reinforced the Texians under siege at the Alamo. They are "immortalized" as the only unit to answer the To the People of Texas & All Americans in the World letter. Along with the other Alamo defenders, they were all killed and burned after the Battle of the Alamo.

Juana Gertrudis Navarro Alsbury was one of the few Texian survivors of the Battle of the Alamo during the Texas Revolution in 1836. As Mexican forces entered her hometown, San Antonio de Bexar, on February 23, Alsbury's cousin by marriage, James Bowie, brought her with him to the Alamo Mission so that he could protect her. Bowie, the co-commander of the Texian forces, collapsed from illness on the second day of the siege; Alsbury nursed him throughout the remainder of the siege. On March 4, Texian co-commander William Barret Travis sent her as an emissary to Mexican commander Antonio Lopez de Santa Anna to negotiate an honorable surrender for the Texian forces. She made no headway, and her visit likely increased Santa Anna's impatience to end the siege in a spectacular fashion. Santa Anna launched an early-morning assault on the Alamo on March 6.

Almaron Dickinson was a Texian soldier and defender during the Battle of the Alamo, fought during the Texas Revolution. Dickinson is best known as the artillery officer of the small garrison, and the husband of one of the only three non-Mexican survivors to live through the battle, Susanna Dickinson, as well as the father to their infant daughter Angelina, whose life was also spared. He is a member of the Immortal 32 and Old Eighteen. 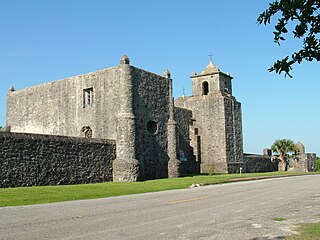 The Presidio Nuestra Señora de Loreto de la Bahía, known more commonly as Presidio La Bahía, or simply La Bahía is a fort constructed by the Spanish Army that became the nucleus of the modern-day city of Goliad, Texas, United States. The current location dates to 1747.

The Siege of the Alamo describes the first thirteen days of the Battle of the Alamo. On February 23, Mexican troops under General Antonio Lopez de Santa Anna entered San Antonio de Bexar, Texas and surrounded the Alamo Mission. The Alamo was defended by a small force of Texians and Tejanos, led by William Barrett Travis and James Bowie, and included Davy Crockett. Before beginning his assault on the Alamo, Santa Anna offered them one last chance to surrender. Travis replied by opening fire on the Mexican forces and, in doing so, effectively sealed their fate. The siege ended when the Mexican Army launched an early-morning assault on March 6. Almost all of the defenders were killed, although several civilians survived. 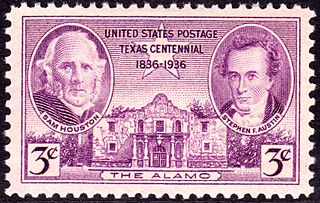 The Battle of the Alamo left a substantial legacy and influence within American culture and is an event that is told from the perspective of the vanquished.

The City of San Antonio is one of the oldest Spanish colonization of the European settlements in Texas and was, for decades, its largest city. Before Spanish colonization, the site was occupied for thousands of years by varying cultures of indigenous peoples. The historic Payaya Indians were likely those who encountered the first Europeans. 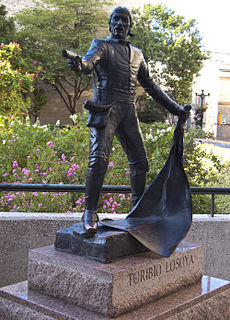 José Toribio Losoya, was a former Mexican soldier, a Texian military participant in the Siege of Bexar and Battle of the Alamo defender.