Ateji PX is an object-oriented programming language extension for Java. It is intended to facilliate parallel computing on multi-core processors, GPU, Grid and Cloud.

Ateji PX can be integrated with the Eclipse IDE, requires minimal learning of the additional parallel constructs and does not alter the development process.

Each || symbol introduces a parallel branch. Running this program will print either

depending on how the parallel branches happen to be scheduled.

The quantification (int i : N) creates one parallel branch for each value of i. The effect of this code is to increment all elements of array in parallel. This code is equivalent to

More complex quantifications are possible. The following example quantifies over the upper left triangle of a square matrix:

Code that performs a similar and typically small operation on a large collection of elements is called data parallel, and appears often in high-performance scientific applications. A typical representative of data-parallel languages for the C/C++ or Fortran ecosystems is OpenMP.

The term task parallelism is used when work can conceptually be decomposed into a number of logical tasks. In this example, tasks are created recursively:

Task parallelism is implemented in languages such as Cilk, and in libraries similar to the fork/join pair of Unix system calls.

Parallel branches have two ways of communicating; either by concurrently reading and writing shared variables, or by sending explicit messages. The operators ! and ? respectively send and receive a message on a channel.

A program is said to be data-flow when computation is initiated and synchronized by the availability of data in a flow. A typical example is an adder: it has two inputs, one output, and whenever the two inputs are ready, it sends their sum on the output.

Note the parallel read [ in1 ? value1; || in2 ? value2; ]. It means that the two input values can come in any order. Without it, the code may deadlock if values were coming in the wrong order. This shows that parallel primitives in a programming language are not only about performance, but also about the behavior of programs.

The adder by itself doesn't do anything, since it reacts on input data. It needs to be put in a context where other parts feed input values and read output values. The way to express this is to compose all pieces in a large parallel block:

Anything that can be thought of as a combination of logical gates or electrical circuits can readily be expressed in this way as a data-flow program.

In computer science, functional programming is a programming paradigm—a style of building the structure and elements of computer programs—that treats computation as the evaluation of mathematical functions and avoids changing-state and mutable data. It is a declarative programming paradigm in that programming is done with expressions or declarations instead of statements. In functional code, the output value of a function depends only on its arguments, so calling a function with the same value for an argument always produces the same result. This is in contrast to imperative programming where, in addition to a function's arguments, global program state can affect a function's resulting value. One of the key motivations for the development of functional programming is making a program easier to understand by eliminating changes in state that do not depend on function inputs which are called side effects.

Pike is an interpreted, general-purpose, high-level, cross-platform, dynamic programming language, with a syntax similar to that of C. Unlike many other dynamic languages, Pike is both statically and dynamically typed, and requires explicit type definitions. It features a flexible type system that allows the rapid development and flexible code of dynamically typed languages, while still providing some of the benefits of a statically typed language.

OpenMP is an application programming interface (API) that supports multi-platform shared memory multiprocessing programming in C, C++, and Fortran, on many platforms, instruction set architectures and operating systems, including Solaris, AIX, HP-UX, Linux, macOS, and Windows. It consists of a set of compiler directives, library routines, and environment variables that influence run-time behavior.

In computer science, a generator is a routine that can be used to control the iteration behaviour of a loop. All generators are also iterators. A generator is very similar to a function that returns an array, in that a generator has parameters, can be called, and generates a sequence of values. However, instead of building an array containing all the values and returning them all at once, a generator yields the values one at a time, which requires less memory and allows the caller to get started processing the first few values immediately. In short, a generator looks like a function but behaves like an iterator. 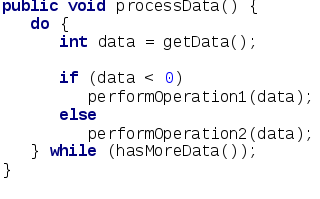 The syntax of the Java programming language is the set of rules defining how a Java program is written and interpreted. 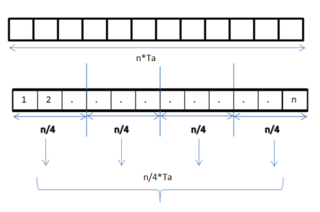 Software is said to exhibit scalable parallelism if it can make use of additional processors to solve larger problems, i.e. this term refers to software for which Gustafson's law holds. Consider a program whose execution time is dominated by one or more loops, each of that updates every element of an array --- for example, the following finite difference heat equation stencil calculation:

In computers, XC is a programming language for real-time embedded parallel processors, targeted at the XMOS XCore processor architecture.

Super Pascal is an imperative, concurrent computing programming language developed by Brinch Hansen. It was designed as a publication language: a thinking tool to enable the clear and concise expression of concepts in parallel programming. This is in contrast with implementation languages which are often complicated with machine details and historical conventions. It was created to address the need at the time for a parallel publication language. Arguably, few languages today are expressive and concise enough to be used as thinking tools.

OptimJ is an extension of the Java with language support for writing optimization models and abstractions for bulk data processing. The extensions and the proprietary product implementing the extensions were developed by Ateji which went out of business in September 2011. OptimJ aims at providing a clear and concise algebraic notation for optimization modeling, removing compatibility barriers between optimization modeling and application programming tools, and bringing software engineering techniques such as object-orientation and modern IDE support to optimization experts.

In software engineering, the module pattern is a design pattern used to implement the concept of software modules, defined by modular programming, in a programming language with incomplete direct support for the concept.