Augustus Does His Bit

Augustus Does His Bit: A True-to-Life Farce (1916) is a comic one-act play by George Bernard Shaw about a dim-witted aristocrat who is outwitted by a female spy during World War I.

In the small town of Little Pifflington, Lord Augustus Highcastle tells his secretary Horatio Beamish that the war is a very serious matter, especially as he has three German brothers-in-law. He soon learns that a female spy is after an important document in his possession. A glamorous woman visits him. After flattering him by saying how important he is, she tells him that she suspects her sister-in-law of being the spy. She explains that Augustus' brother, known as "Blueloo", has made a bet that Augustus can be easily tricked, and intends to use this woman to prove it. If she can get the document, a list of British gun emplacements, and take it to "Blueloo", Augustus's incompetence will be exposed.

Beamish enters holding the document, which Augustus had left on a coffee table in the hotel. The lady manages to switch the document for a fake one and leaves. Having secured the document before witnesses, she returns to telephone the War Office. She tells "Blueloo" that she easily outwitted Lord Augustus. Augustus then realises that she was the spy and the document he has is a fake.

The play was produced on 21 January 1917, at the Court theatre for the Stage Society. Like its predecessor The Inca of Perusalem it was originally presented anonymously, advertised as a "play in one Act by the author of The Inca of Perusalem." Shaw commented that some critics were not pleased by the satire of the war effort: "The shewing up of Augustus scandalized one or two innocent and patriotic critics, who regarded the prowess of the British Army as inextricably bound up with Highcastle prestige, but our Government Departments knew better. Their problem was how to win the war with Augustus on their backs, well meaning, brave, patriotic, but obstructively fussy, selfimportant and imbecile." [1] The play contains several typical Shavian themes: women outwitting men and the incompetence of the aristocratic ruling class, most notably. The references to the aristocracy's German family connections corresponds with the views Shaw expressed in his booklet Common Sense about the War. [2]

Arcadia is a 1993 play by Tom Stoppard concerning the relationship between past and present, order and disorder, certainty and uncertainty. It has been praised by many critics as the finest play from one of the most significant contemporary playwrights in the English language. In 2006, the Royal Institution of Great Britain named it one of the best science-related works ever written.

Lady Windermere's Fan, A Play About a Good Woman is a four-act comedy by Oscar Wilde, first performed on Saturday, 20 February 1892, at the St James's Theatre in London. 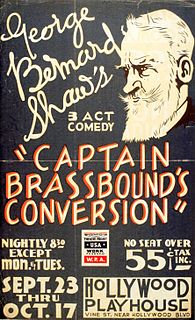 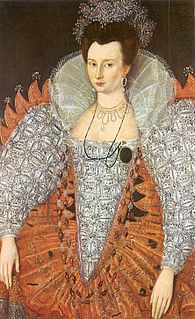 The Dark Lady of the Sonnets is a 1910 short comedy by George Bernard Shaw in which William Shakespeare, intending to meet the "Dark Lady", accidentally encounters Queen Elizabeth I and attempts to persuade her to create a national theatre. The play was written as part of a campaign to create a "Shakespeare National Theatre" by 1916.

"Chuck Versus the Fake Name" is a third-season episode of the television series Chuck. It was the eighth episode of the season, and the first to air after a two-week hiatus for the 2010 Winter Olympics. Chuck must juggle his new relationship with Hannah while at the same time taking on the role of an assassin hired by the Ring.

Great Catherine: Whom Glory Still Adores is a 1913 one-act play by Irish dramatist George Bernard Shaw. It was written between two of his other 1913 plays, Pygmalion and The Music Cure. It tells the story of a prim British visitor to the court of the sexually uninhibited Catherine the Great of Russia.